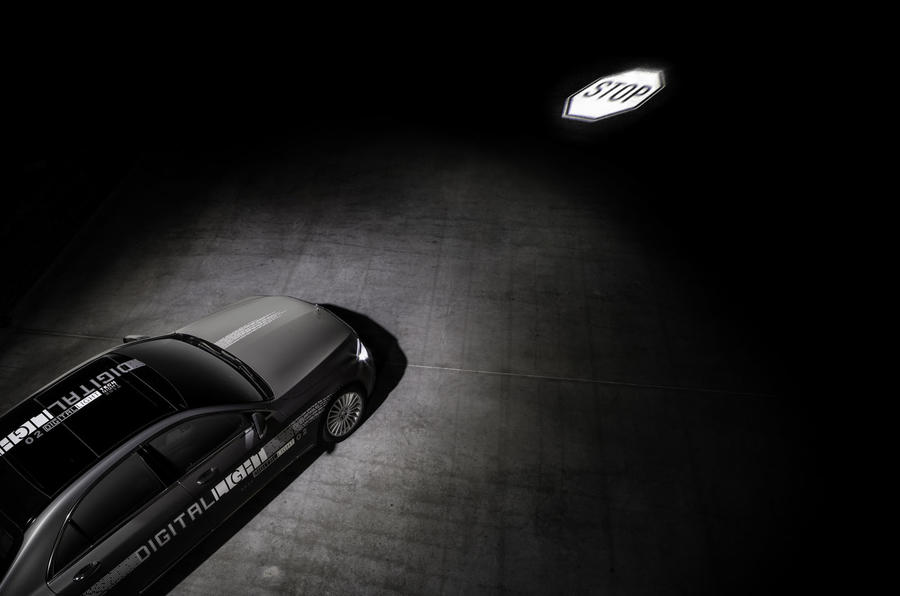 Mercedes-Benz has revealed new headlight technology which it will be using in its future models. The innovative digital lights have the capability to project illuminated symbols, like stop signs and zebra crossings on to the road. Named Digital Light, the new system has an advanced high-definition projection technology comprising the use of over one million micromirrors per headlight. The lighting was first revealed on the F015 research vehicle. The new headlights use radar and camera sensors in combination with algorithms that the company developed to identify other road users and change the light settings depending on the environment. The new projector technology and control software used as part of the system allows Digital Light to recognize other road users and adjust the intensity of the beam in order to avoid dazzling them.

Speaking about the new headlight technology, Gunter Fischer, head of exterior body development and vehicle operating systems at Daimler said that rather than focusing on beam records, the company wanted to achieve optimum vision and maximum brightness without glare. Features that can support the driver and make communication with other road users easier can significantly increase safety while driving at night.

The new technology is inspired by the Multi Beam headlight technology that is already available on a number of Mercedes-Benz models. Each of the new generation Digital Light headlights comprises four light points, with each light point having 1024 individually actuatable LED chips per unit. Thus, each vehicle will have a total of 8192 LEDs per vehicle.

Audi and BMW offer laser light technology, but Mercedes-Benz has decided not to opt for this technology and claims its new light technology offers motorists and other road users greater benefits. Fischer claims that it is not the technology in the headlight that is important but the digital intelligence behind it.

When Mercedes-Benz first unveiled the lights on the F015 research vehicle, it was possible for the lights are able to project high-resolution symbols onto the road surface. If the sensors in the car identify pedestrians at the side of the road, the headlights can project a zebra crossing onto the road to signify that it was safe for the pedestrian to cross the road.

Within the near future, Mercedes-Benz is planning to offer other illuminated symbols, like stop signs, guiding paths, ice warnings and distance guides on the production versions of the Digital Light headlights.