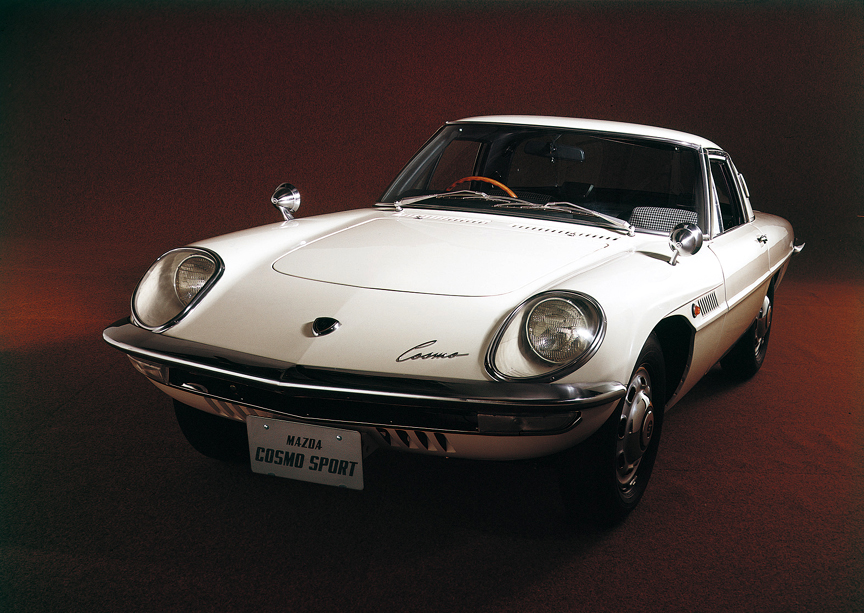 Fifty years ago, Mazda accomplished what was once considered to be an impossible task. At the time, the company was known as the Toyo Kogyo Corporation and needed to come up with a unique offering to differentiate it from other competitors in the rapidly growing Japanese automotive industry. In 1961, Mazda licensed NSU Motorenwerke AG and Wankel GmbH’s rotary engine technology, with a view to making wider use of the engine and making it commercial. The prototype of the engine arrived in Hiroshima, but testing did not go as expected. Mazda had a lot riding on this new technology, but within the first hour of tests, the engine seized. A lot more work had to be done to keep Mazda afloat and independent.

The company’s Chief Engineer Kenichi Yamamoto picked a team of the company’s most talented engineers to try and make the rotary engine viable. The handpicked team, known as the 47 Samurai raced against time to debut the world’s first twin-rotor, rotary-engined car, the Mazda Cosmo Sport 110S

at the 1964 Tokyo Motor Show, on May 30, 1967. The company thus achieved a feat that no other carmaker had done. Mazda was earlier known only for its small sedans and work trucks. The Cosmo Sport 110S was Mazda’s first sports car and came with a low shape that complemented the compact dimensions of its two-rotor engine.

Though only 1,176 production Cosmo Sports were made, the legacy of the model endured. Right from the 84-hour Marathon de la Route in 1968, Mazda kept challenging its engineers and designers to refine their craft and come up technological innovations that would help enhance the performance of its vehicles. This led to a winning streak at motorsport events across the world and paved the way for development of sports cars in which the focus was on lightweight performance rather than brute strength.

With respect to the rotary engine, Mazda’s team achieved a milestone in 1991, when the quad-rotor-powered Mazda 787B emerged as the winner at the 24 Hours of Le Mans. Mazda made over 1.99 million rotary-engine vehicles ranging from sports cars to sedans and even a 26-passenger bus.

As in the days when the 47 Samurai spent all their waking hours to make the rotary-engined car a reality, Mazda today continues to focus on hashiru yorokobi — exhilaration, joy and wellbeing from driving — when it comes to all its vehicles. The company’s goal is to create a strong emotional connection with customers by offering them a unique combination of driving pleasure and outstanding environmental and safety performance.

Mazda recently faced challenges similar to those it faced when developing the rotary engine. The company wanted to develop its SKYACTIV Engine Technology which aims to increase driver enjoyment with a human-centric focus on the entire driving experience. This too was considered to be an impossible, especially against the backdrop of the 2008 financial crisis and Mazda’s position as a relatively small player on the automotive scene.

When Mazda introduced its SKYACTIV-Engine family, there was no other gasoline-powered production vehicle which could operate with a 14.0:1 compression ratio — the world’s highest. There was no other diesel engine which could achieve a 14.4:1 compression ratio — the world’s lowest. Yet, Mazda achieved the impossible and today, Mazda’s clean-operating SKYACTIV engines are still unmatched in their balance of performance, driving engagement and environmental efficiency.

The lightweight, rigid SKYACTIV-Chassis and SKYACTIV-Body units provide motorists with unmatched levels of driving enjoyment and safety. And, in combination with all other SKYACTIV Technologies, the chassis and body designs and engineering allow for an unmatched Jinba Ittai driving experience in every Mazda, whether the iconic MX-5 Miata sports car or the seven-passenger CX-9 crossover SUV — driver and car as one.