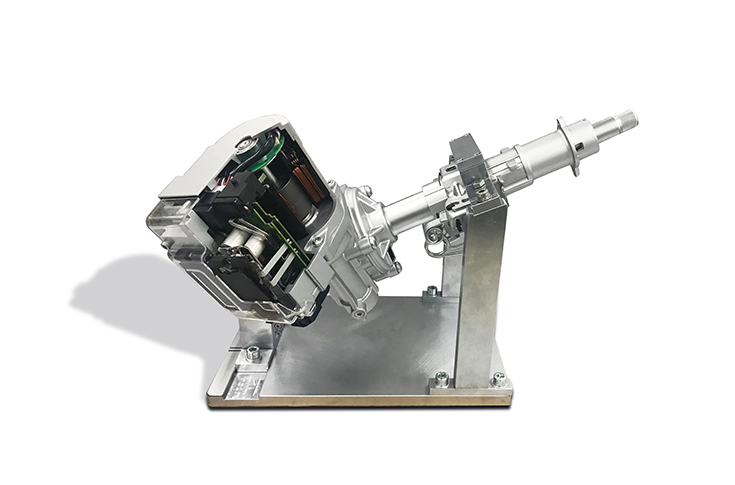 Hyundai Mobis has developed a dual-mode electronic steering system that is specifically designed for the autonomous driving systems. The new system incorporates the redundant control mode which takes advantage of two electronic circuits that enables the vehicle to maintain normal steering capabilities under all circumstances.

The company says that the main benefit of this redundant control mode is that when the two independent electronic circuits are applied to one steering system even in case one breaks down, the other circuit will continue to work normally and can maintain stable driving.

Using the current steering system, if the driver turns the steering wheel, the internal sensor can detect the the torque and the steering angle and use this data to send a signal to the electronic control unit (ECU). The ECU then computes the input data and moves the motor accordingly so that control is maintained in the direction desired by the driver. In the event that there is any issue with the steering system, the alert driver will be able to corrective measures, like reducing speed and moving the car to a safe place on the road. This is not the case in an autonomous vehicle where the driver is not completely attentive over the road.

As an outcome of the new technology, it is now possible for Hyundai Mobis to guarantee that even if the steering system experiences any difficulty when the car is on the road, the system is able to detect the issue on its own and is able to control the steering wheel before stable autonomous driving is possible.

Hyundai Mobis said that it has been able to significantly reduce the size of the electronic control unit (ECU) and has developed the system software in such a way that the two systems (in the redundant control mode) constantly keep tabs on each other to ensure that the steering system continues to be stable irrespective of the circumstances.

Hyundai Mobis says it has already secured proprietary technologies related to steering and braking which are needed for safe driving and stopping of autonomous vehicles. The company is planning to complete extensive tests for verification of these technologies in general driving conditions, like on expressways, downtown and parking, by the end of 2018 so that it can commence mass-production in 2020.

Kim Se-il, head of the Chassis Division R&D Center of Hyundai Mobis said that autonomous driving can become a reality only when state-of-the-art solutions are available for safety control, like steering and braking, as well as for sensor and positioning technology.

Hyundai Mobis is now working with two German specialists on the development of high-performance cheaper radars which can detect 360° around the vehicle. It is also working on the development of cameras using deep learning technology, through cooperation with startup companies both in South Korea and overseas, thus extending its research areas to all aspects related to autonomous drivingso that auomakers can benefit from integrated solutions.