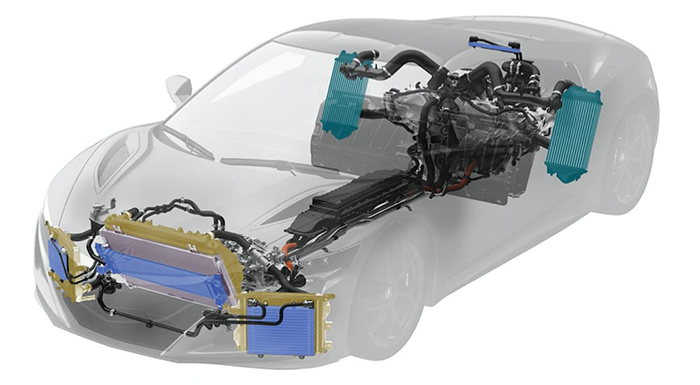 While it is true that splitters and big spoilers might look cool, they are no longer the most ideal way to shuffle the air around a supercar. With smart computational fluid dynamics and wind tunnel testing, automotive manufacturers are able to utilize complex shapes and flics to manipulate the air, thus creating downforce and cooling without having to destroy the car’s shape.

This is how the all-new Honda NSX keeps its wheels on the ground and its intricate twin-turbo V6 and hybrid system cool on the move. Called Total Airflow Management, the exterior of the NSX has been shaped to thoroughly balance downforce, drag and cooling.

In terms of downforce, one of the toughest challenges faced by Honda’s engineers was balancing the amount over each axle.

In order to ensure that there is three times more downforce over the rear axle than the front, the rear diffuser works in combination with slots in the taillights and a rear spoiler to smooth out the vehicle’s wake. Some automakers have decided to go for active aero with moving wings and motorized panels but Honda is eager to stress that it has managed to attain the desired outcome with a standard passive aerodynamics setup.

Vents located around the front wheels work in combination with venting in the flanks to ensure air flowing along the side of the car successfully finds its way into the mid-mounted air intake, where it is directed over the rear deck to create more downforce.

What’s more, aero offers more than just downforce. The NSX comes with an intricate hybrid system working in combination with its twin-turbocharged V6, which puts its power to the road through a nine-speed dual clutch gearbox. Each of these components consists of inpidual pieces that must be cooled, such as the turbochargers within the engine and the two electric motors within the twin motor unit.

Those components are reliant on cooling from the broad front air intakes. Given that Honda has squeezed all the heat exchangers behind the front bumper, cool air flowing through those big air intakes is well distributed among radiators for the engine, a condenser and cooling for the gears, and a cooler for the twin-electric motors. Meanwhile, air whipping down the rear hatch works by cooling the engine bay and clutch.

According to Thomas Ramsay, Aerodynamics and Cooling Project Leader on the NSX project, with the design of the new Honda NSX, there is literally form following function, so it was a really exciting vehicle to work on as an aerodynamicist.

“To meet the challenge of the ambitious performance targets, innovative packaging design and dramatic styling, Honda’s engineers had to totally re-imagine the exterior engineering for this modern supercar”. Ramsay continued that the new ‘total airflow management’ strategy supports aerodynamic performance and component cooling while also contributing to more dynamic styling.