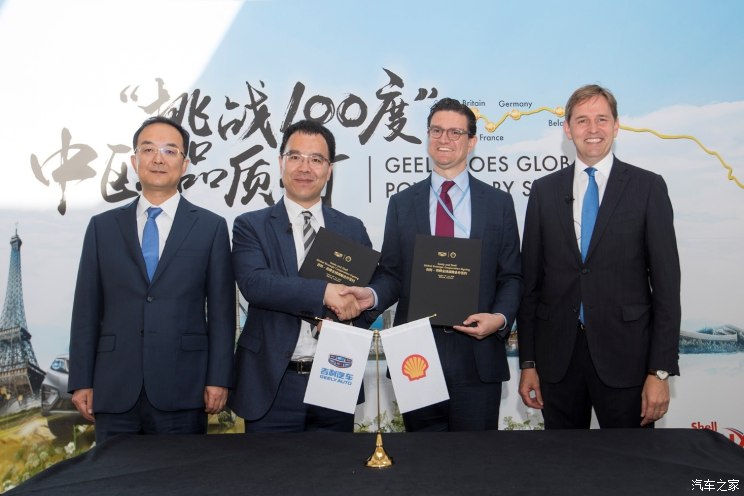 As part of the challenge, over a period of more than one month, the fleet of Bo Yues travelled from Xi’an in China over 18,000km across Asia and Europe, passing through 58 cities in 9 countries and stopping in Moscow, Minsk, Hamburg and Paris before finally arriving at Goodwood in the United Kingdom. The team faced more than a dozen kinds of difficult road conditions and crossed three different climate zones to complete the trip which demonstrated the vehicle’s quality, craftsmanship, and character to the world, as well as the strength of Chinese auto brands.

The Bo Yue is Geely’s first Smart Connected SUV and offered the appealing combination of smart comfort, smart connectivity and smart safety to become a best selling vehicle in the Chinese market. Over 500,000 units of the BO Yue have been sold in the Chinese market within 25 months of its launch, topping SUV sales in China.

During the “Challenge 100 Degrees” tour, the Bo Yue challenged tanks to a race in Moscow, was tested in the Shell Technology Centre Hamburg, competed in the motorsports on the renowned Nürburgring track, and in Goodwood conducted off-road test drives.

Shell served as the co-organizer of the cross continent “Challenge 100 Degrees” tour and mobiled resourced for the event on a global scale while engaging in several promotional activities. The partnership between Geely and Shell with regard to lubricant solutions goes back to 2006, and the two companies have collaborated to develop advanced engine oils for Geely engines for the past 12 years. They have worked together on several aspects including production, service, motorsports, thus becoming a model of win-win cooperation in the industry.

Sheely and Geely Auto Group marked the conclusion of the jointly organized “Challenge 100 Degrees” tour by signing a global strategic cooperation agreement that would reinforce the relationship that has existed between the two partners for the past 12 years and further extend their cooperation beyond lubricants. The agreement was drawn up as a blueprint for greater collaboration between Shell and Gelly in areas like entry into new markets, research and development and joint branding in the fields of corporate social responsibility and motorsports. The two companies would also collaborate on new energy transition and new digital opportunities.

Commenting on the agreement, Huibert Vigeveno, Executive Vice President of Global Commercial at Royal Dutch Shell said that the agreement demonstrated the value that Shell as an energy company with a global footprint and diverse interests and capabilities can bring to the table as a strategic partner to its customers in the field of the energy transition that is transforming the future of mobility.

Conghui, President and CEO of Geely Auto Group, said that Geely Auto Group has worked with Shell for the past 11 years, and throughout this period, the two companies have explored shared synergies which have made it possible for Geely to expand aggressively. He expressed his hope that in the future the strengthening of the partnership with Shell would help Geely with its 2020 Strategy goal of producing and selling two million cars on an annual basis, thus making Geely a leading new energy brand under the Blue Geely Initiative for development of cutting edge technologies.The strengthening of Geely’s partnership with Shell marks another advance in the globalization of Chinese auto brands.

Conghui added, “As a leader among Chinese auto brands, Geely Auto not only needs to lead in the Chinese market, it need to be confident, expand outwards, fully engage in global competition, and become one of the world’s top automakers. To achieve those lofty goals, Geely has committed itself to leading through global talent and technology.”

In 2018, Geely has ambitious plans to establish a new design studio in the UK to support Lotus as well as a new R&D center in Europe. This R&D center will serve as part of an innovative development system which will comprise five major R&D centers and five major design studios spread around the world. Currently, Geely employs over 15,000 research staff from over 40 countries.