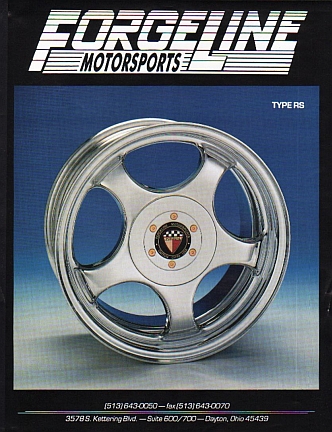 Custom wheel manufacturer, Forgeline is marking a milestone year in 2019 as the company gears up to 25 years in business. The company which is based in Dayton, Ohio and is run by twin brothers Dave and Steve Schardt is a family owned concern that specializes in made-to-order forged wheels..

Forgeline’s Global Sales Manager, Steve Schardt, set up Forgeline in 1994 to cater to the need for custom forged wheels that are made for racing applications. Twenty-five years on, Forgeline continues to make wheels for the highest levels of road racing, and it has expanded its reach to cover high-end street applications, too.

Commenting on the company’s growth, Forgeline President Dave Schardt said that their goal when they started Forgeline in 1994 was to create high-quality American-made racing wheels. They have managed to exceed all of their original expectations. The company has now become a much larger operation, but is still as dedicated to quality and performance as it was back then.

The Forgeline story actually goes all the way back to 1970 when their’ father, Jim Schardt, acquired Dayton Wire Wheel and turned it into a highly successful business. Both the brothers worked in the Dayton Wire Wheel factory as they grew up. They spent the weekends going with their dad to various racetracks to campaign Porsches and Chevrolet Corvairs in multiple amateur racing series throughout the 1970s and 1980s.

In the 1990s, the Schardt brothers became involved in racing and the wheel industry. Steve served as a club-level driving instructor, while Dave owned and operated a regional wheel distribution business called The Wheel Source and was competing in the Speedvision World Challenge racing series, the precursor of the current Pirelli World Challenge series. They realized that serious road racers needed a US produced high-quality wheel option, and the brothers joined hands to launch Forgeline. The company’s initial product line consisted of a single two-piece forged wheel called the RS.

The RS wheel proved to be extremely successful. In 1995, RealTime Racing’s PD Cunningham used the RS wheel to win a World Challenge class championship. It went on to become the wheel of choice for at least half of the World Challenge field.

In 2019, Forgeline makes over 120 wheel models meant for both the racetrack and the street. The extensive range of wheels includes three piece modular wheels, one piece forged monoblock wheels and an acclaimed “Carbon+Forged” hybrid range that combines precision-machined forged aluminum centers with lightweight high-tech carbon fiber barrels.
Every Forgeline wheel is still custom made-to-order and precision-machined from heat-treated 6061-T6 aluminum that is forged on a 6000-ton hydraulic press. This creates the strongest foundation possible. The forging process that is used aligns the grain structure, reduces porosity and increases material uniformity, thus facilitating extremely high strength-to-weight ratios and ensuring the most consistent quality. Forgeline wheels are hand-finished and assembled by a team of expert craftsman whose high standards mean that they make products of exceptional quality and appearance.

Forgeline’s engineering expertise has been used to make wheels for many high-end sports and exotic vehicles, when their owners want the highest quality wheels.

In the past 25 years, Forgeline has forged an impressive success story. The commitment of the owners which is driven by their passion, craftsmanship and innovation means that the company is set for an even brighter future.