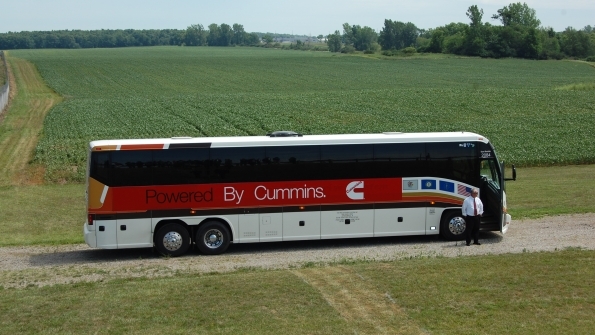 With electric vehicles becoming more and more popular, engine manufacturer Cummins has said that it hopes to start manufacturing and selling electric powertrains for transit bus applications in 2019. Longer range versions of these engines will become available by 2020 as Cummins believes that electricity will become the main source of power for commercial vehicles in the near future.

Julie Furber, executive director of electrification business development for Cummins explained in a conference call with members of the media that eventually electric power will come to all of the company’s markets in one way or the other

She said that the first vehicles to have this new technology are likely to be transit buses in cities around the world with industrial and commercial applications to follow shortly.

Cummins chairman and CEO Tom Linebarger said on the call that the company was increasing its investment into electrification while at the same time continuing to focus on diesel fuel engines. He emphasized that Cummins was not limited to just making engines.

Linebarger stressed that Cummins was not just a diesel engine company but also a technology company, with the trucking industry owing a lot to the company’s expertise. He said that most people thought of Cummins as a manufacturer of diesel engines due to the company’s success in this regard. Essentially, Cummins would like to position itself as a power technology company.”

The announcement that Cummins is working on electric powertrains shows that the company is hedging its bets and is doing its best to ensure its survival in a world where diesel engines will no longer be the norm in commercial vehicles.

In the likely scenario that electric powertrains will gain traction in the commercial vehicle market, Cummins will still have an edge. Cummins has indicated with this move that it is serious about retaining its position as a key player in the market, even if the company’s core diesel engine business peters out.

To cope with this technological challenge, Cummins will increase its spend on research and development from its historical 3% to 4% range to fund investment in electrification and other “digital” offerings, like telematics.