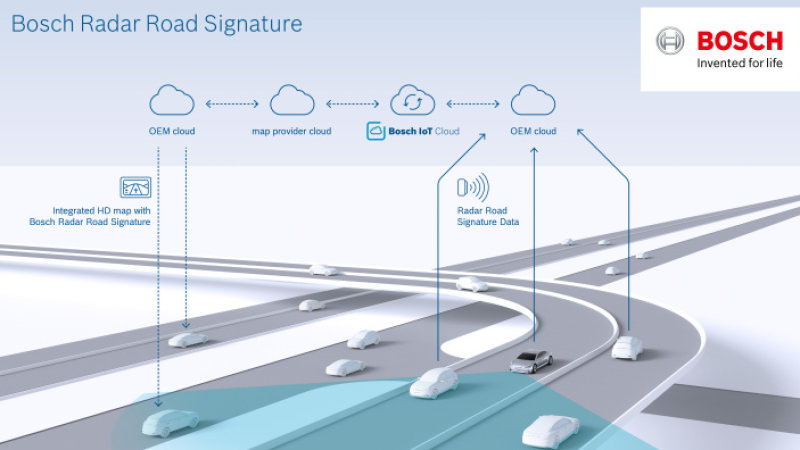 Bosch has announced that the company will be collaborating with TomTom to work on a new kind of high-resolution localized maps. These maps will come with a “radar road signature” that is generated by Bosch. This signature can be used by cars to help position cars with a fairly high level of accuracy. These maps will be used to supplement the video data that were earlier used in trials of self-driving cars. The biggest advantage of using such maps is that they will work even in conditions where the visibility is really poor, as in cases of snowy weather or thunderstorms. In such a scenario, cameras will not provide an accurate idea of the location of the vehicle.

Use of this technology is also more efficient from a networking perspective as the data that is used to transmit this information to vehicles is only about half that sent when using video. This will definitely have an impact on the cost factor as the cost of data transmission is one cost that vehicle manufacturers have to consider as part of the cost of providing autonomous technology. Bosch currently plans to start collecting data from vehicles at least by the end of the decade.

Data from the vehicles will contribute heavily to the map making once the technology has been put in place. Bosch will have to filed cars with modified versions of the company’s previous radar sensors, as the old versions are meant to work in tandem with today’s advanced driver assistance feature, and are generally activated upon detecting motion. In order to make the updates with evolving high-resolution mapping work, Bosch changed the design for constant performance, as opposed to activity-based triggering.

The mapping solution will be made up several components – localization information to help cars to understand where they are within a lane, a planning layer to help project the upcoming course of the vehicle, and a dynamic layer which will include real-time info about construction work, parking spaces and traffic back-ups. The role that information from sources including Bosch’s radar units will play will be crucial.

The “radar road signature” being developed by Bosch can work with any “conventional mapping format,” and hence can be easily used in a lot more places, especially as mapping becomes more widespread for helping autonomous vehicles travel safely and effectively. Since Bosch is one of the world’s leading supplier for automakers when it comes to this kind of radar hardware, those maps should have great coverage, too.