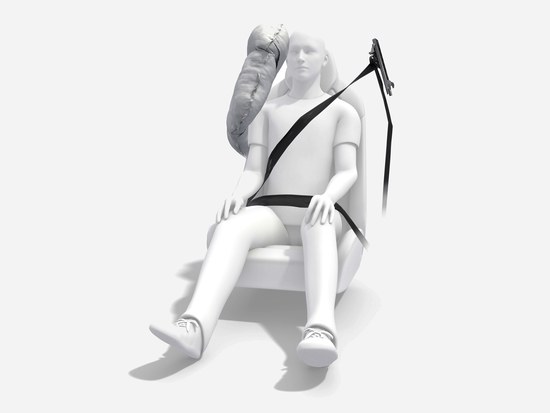 Self-driving cars are no longer an impossible dream but an idea that is soon set to become a reality. It is quite likely that we will be seeing self-driving cars on the road within a period of five years. Initially, when it comes to the interiors, these cars might look quite like today’s conventional cars, with a steering, dashboard and pedals. However, now that no one will be doing the driving, the seating configuration is likely to change. With no need to focus any more on driving, those passengers might like to have seats that can swivel to face those in the rear to make conversation and exchange ideas. This will pose a challenge to designers who are concerned about safety. Currently, airbags are placed in front of a passenger who is restrained by a seatbelt and will be in the same position throughout the journey. With the advent of self-driving cars, this is likely to change.

The German company, ZF has come up with a clever airbag that is mounted on the side of each seat. The airbag was initially meant for conventional cars as it could prevent passengers by banging their heads together in the event of an accident. The company feels though that it is one idea that is futureproof as the airbag is fixed to the seat and can be easily adapted for use in the self-driving cars of the future.

According to ZF, once the steering wheel disappears in the future, such seat-integrated systems could be valuable in addressing the advanced interior concepts for future vehicles and new mobility solutions.

Current models have as many as eight airbags that are deployed from the steering wheel, the dashboard, the sides of the seats, and the roof, to protect the head, torso, and knees of the driver and passengers when an accident occurs. For added safety, Volvo has come up with a pedestrian airbag that is activated at the base of the windshield, and Ford offers seatbelt airbags. They are all triggered by a high-tech system of sensors that can open the airbags in 0.03 seconds through a network of vents in order to minimize the impact of an accident on the body and slow the rate of deceleration. They can also reduce the chances of occupants being ejected from a vehicle.

When it is deployed, the new ZF airbag someone has raised an arm with a clenched fist. The high inflation pressure and the shape of the bag restricts the movement of the passenger without any support from the center console. This is the key point that differentiates it from the other airbags that are made by other airbag manufacturers. Using such an airbag on either side of a seat could protect passengers no matter which direction they are facing, with each seat thus becoming a self-protecting device. In instances where forward visibility is not a factor, such systems could be even larger.

Human error is the cause, at least in part, if 90 per cent of vehicular accidents. Hence, we can definitely expect the accident rate to decrease when self-driving cars are used. Nevertheless, it is always good to be prepared and this is where new safety systems like the airbags from ZF will play a crucial role. After all, robots and AI can also go wrong, especially when their creators are all too prone to err.