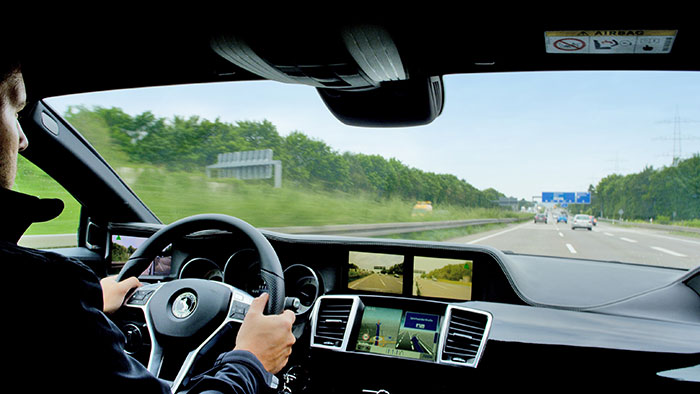 The evolution of vehicle design and increased focus on on-road safety has resulted in the need for greater on-road visibility and monitoring of a car from multiple angles. Navigating small parking spaces and low visibility parking conditions such as underground garages or nighttime parallel parking spots can be hazardous if a car has large blind spots.

Imagine having a bird’s-eye view of your car and its immediate surroundings as you ease into a tight parking space. Some of the world’s premier automakers have translated this idea into a multi-camera navigational monitoring system that uses views from multiple cameras to provide a driver with a 360-degree view similar to a third-person view in a driving simulator. French automotive supplier Valeo has developed just such a system for the BMW 7 Series, comprising three cameras that supply wide-angle images of the area behind the car and the areas around the car where vision may be obstructed. Valeo has also worked with Continental Corporation, using a dashboard-based display unit to relay visual information to the driver.

Ultrasonic sensors form part of the monitoring system delivering real-time obstacle detection and the camera image is also integrated with precision distance measurements and trajectory indications when the driver begins a specific turning maneuver. The system also aids a driver during high-speed turns or high-risk maneuvers by detecting light traffic such as bicycles, pedestrians and other vehicles that enter the vehicles path.

Valeo’s multi-camera system is expected to be upgraded to use data from five onboard cameras, improving the reliability and responsiveness of the system. 190-degree wide images and video from the cameras are displayed to the driver on an in-cabin video screen that supports split views. Honda’s quad-CCD camera monitoring system uses similar technology, with addition navigational information such as a projected steering line and steering angle based on data from sensors in the car’s steering column. Several independent manufacturers also offer bespoke multi-camera systems that include a set of cameras and an electronic control unit. However, automaker-embedded systems are believed to offer the best performance due to their improved integration with the vehicle’s hardware and software components. Infiniti’s Around View® Monitor also adds moving objection detection capabilities on all sides of the vehicle.