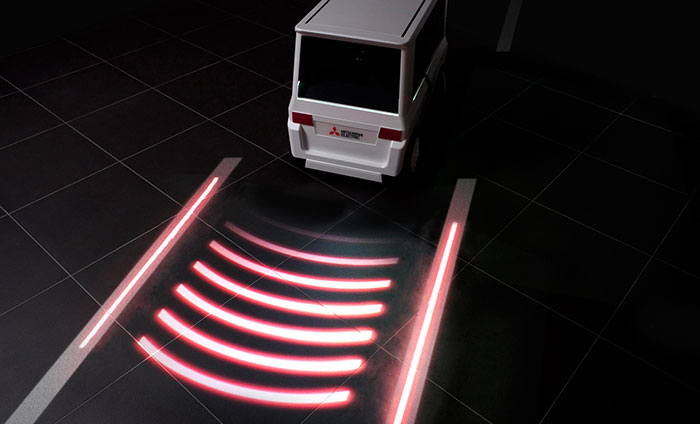 The busy streets of metropolitan cities form the arena where pedestrians and cyclists vie for space with larger and more powerful vehicles. One of the unfortunate effects of the rapid increase in traffic density is the higher risk of accidents which can result in injury and death. Quezon City in the Philippines is a case in point—the city’s Commonwealth Avenue is one of the busiest and most dangerous highways in the world, with routine pedestrian and vehicular fatalities. Around the world, statistics confirm that over 50 percent of the world’s traffic fatalities are pedestrians, cyclists and motorcyclists, with cars involved in a further 31 percent. More often than not, these fatalities occur when the victim is unaware of the presence, movement or trajectory of the larger vehicle involved.

Japanese manufacturer and auto giant Mitsubishi seeks to address the problem of vehicular visibility through a patented projector turning signal system that creates a visual projection of a vehicle’s trajectory on the road. The technology is expected to create an illuminated “light lane” that indicates the vehicle’s direction and if any doors are opened. The system is also expected to indicate unexpected lane changes or sudden change of course on the road, allowing motorists and pedestrians to avoid the risk of being in an accident. The animated LED-powered “light lanes” were featured on Mitsubishi’s EMIRAI 3 xDAS concept car that featured the projector turning signal and a suite of other driver assistance technologies. The use of LED lights indicates desire on the part of the Japanese automaker for the illumination system to minimize power consumption.

Mitsubishi Projector Turn Signals represent a significant step forward in the company’s journey towards developing advanced safety lighting systems. The automaker reports that it is committed to developing future lighting concepts and patented technologies that will aid in the prevention of accidents.