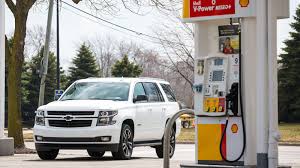 Chevrolet has plans to introduce a new technology that will make it possible for drivers to make payments for petrol at the petrol pump without using either their smartphone or their credit cars. Chevrolet will be embedding this capability in its new Marketplace in-dash e-commerce platform, and will be rolling out this platform on a global basis in the coming months. The company is partnering with Shell for this project at Shell branded fuel stations.

all motorists have to do is press the Shell icon on the dashboard touchscreen, select their preferred station location, tap a few buttons, enter the requested pump number and a pre-selected PIN number which has been designated for the payment method they choose to use. They will then get a code to enter at the pump and start fueling. This will be followed by a confirmation, like a receipt, that would be received directly on the Marketplace interface. The program also incorporates Shell’s Fuel Rewards savings program. Hence, instead of resorting to their purse for their credit cars or having to use their smartphone, they just have to enter three numbers or codes on the user interface.

General Motors had launched its new Marketplace technology in December and it allows motorists to order coffee or food, find gas stations and reserve hotel rooms from their infotainment screens. The company has plans to immediately load the technology in about 1.9 million model-year 2017 and newer Chevy, Buick, GMC and Cadillac vehicles, and about 4 million vehicles by the end of 2018.

GM has revenue sharing agreements with merchants which will be featured on the Marketplace platform, though details of the split in revenue have not been revealed. Some of the retailers involved are Starbucks, ExxonMobil, Shell and TGI Fridays.