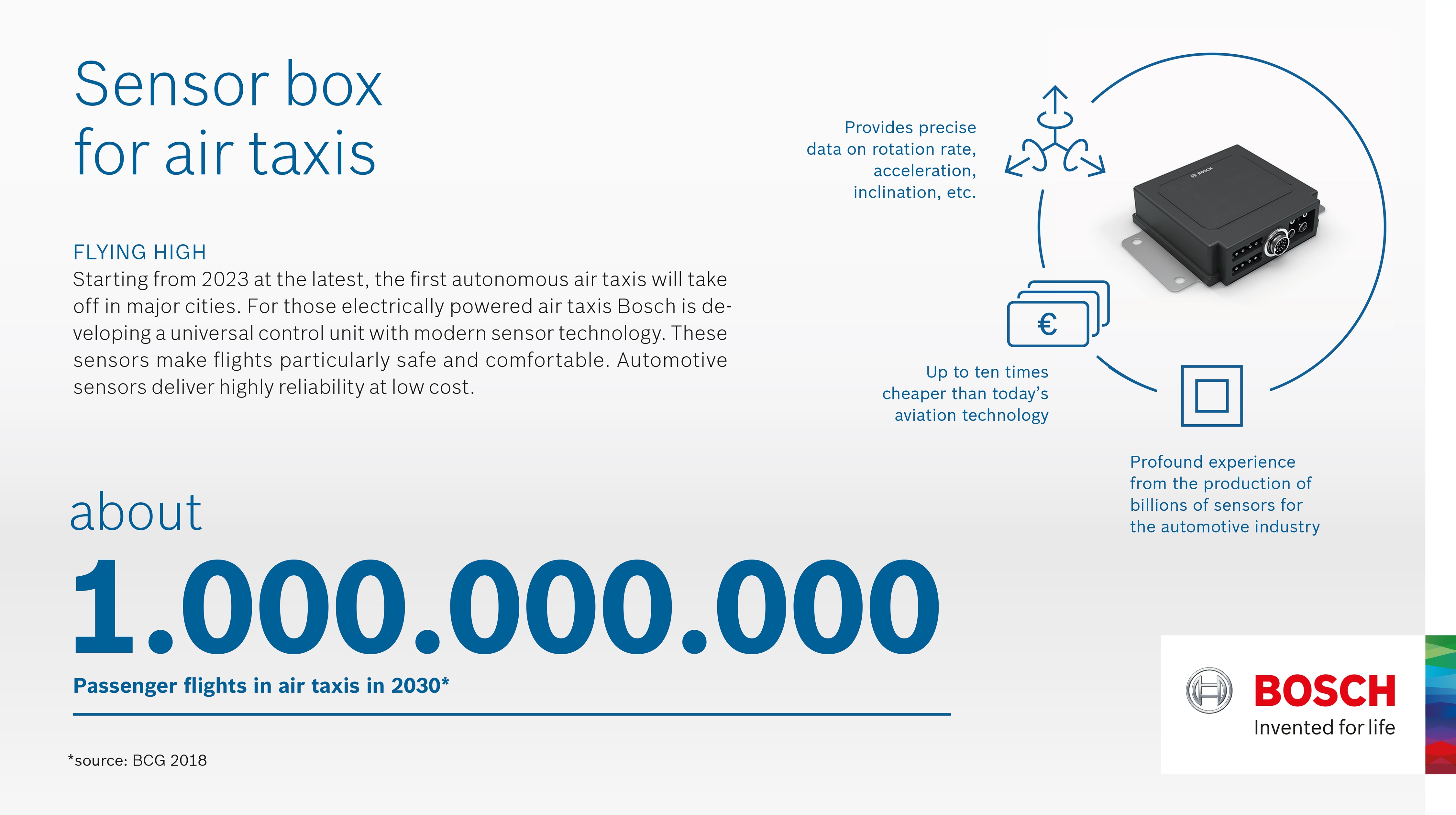 Bosch is currently working on advanced sensor technology which would make the process of using flying taxis safer, more precise, comfortable, and convenient.

According to Harald Kröger, president of the Bosch Automotive Electronics division, we can expect the first flying taxis to be deployed in key cities across the globe by 2023 at least and Bosch has ambitious plans to play a leading role in shaping this future market.

Traffic jams have become a major concern in metro cities around the world. Taking to the air is an attractive alternative and shared services could be relatively cheap.

Bosch has discovered a gap in this market that can help the company to emerge as a leader in this space. Conventional aerospace technology has limited application in this field as it is just too expensive, bulky, and heavy for use in autonomous flying taxis. Modern sensors that are currently in use for automated driving or in the ESP anti-skid system could nevertheless be used in such vehicles and this is where Bosch cmes in with its expertise. Bosch has a team of engineers who have combined dozens of sensors to develop a universal control unit for flying taxis.

The control unit has Bosch sensors which are already used in production vehicles. The universal control unit is meant to help the flying taxi determine its position at all times, so that it can be controlled with precision and safety.

One example is the acceleration and yaw-rate sensors that can accurately measure the movements and angle of flying vehicles. Current sensor systems in the aerospace sector can cost as much tens of thousands or even several hundred thousand euros. Bosch can make its solution for a fraction of this cost as the company uses production- tested sensors it has already been developing and manufacturing for the automotive industry for many years.

Marcus Parentis, the head of the technology team at Bosch in charge of the control units behind the electric light aircraft said that the aim of developing such a system was to make civil aviation with flying taxis affordable for a wide range of providers. The Bosch sensors are particularly small and lightweight. Flying taxi manufacturers can easily install the Bosch sensor box into their air vehicles using the plug-and-play principle.

Parentis said that compared to today’s means of transportation, flying taxis save time on trips of 10 kilometers or more, with a maximum range of up to 300 kilometers.

The Boston Consulting Group has predicted that that people across the globe will use air taxis to take 1 billion flights by 2030, once sharing services have also established.

Shared mobility in the air: 1 billion flights in flying taxis in 2030

It is projected that there will be substantial growth in the market for flights that use electric air taxis in cities in the coming years ahead. By 2020, test flights are scheduled to begin in cities like Dubai, Los Angeles, Dallas, and Singapore. Dubai began concept flights of autonomous flying taxis back in 2017.

Experts predict that such flights will commence on a commercial basis by 2023. It is expected that though such flights will initially be manned by pilots, autonomous vehicles of such type will begin plying over the roofs of major cities as early as 2025. They will be controlled by staff on the ground. By that time, it is expected that there will be about 3,000 flying taxis in operation worldwide, according to Roland Berger. That number is expected to increase to 12,000 by 2030, with this number projected to increase to 100,000 flying taxis by 2050. Consultants from Morgan Stanley estimate that the market for flying taxis could even reach 1.35 trillion euros (1.5 trillion USD) by 2040.

Marcus Parentis from Bosch also feels that this is a market with immense scope for growth.

“We are talking to air taxi manufacturers from the aerospace and automotive industries, as well as with start-ups that build air vehicles and are looking to provide sharing services,” Parentis said. “The question isn’t whether flying taxis will become reality, but when.”

Depending on the number of passengers, the concept and its design, the initial cost of a flying taxi can be around 500,000 euros (AED 2.048 million). This might seem steep but automated and electric air vehicles especially when it comes to sharing solutions are cheaper than a helicopter ride and can save time significantly.