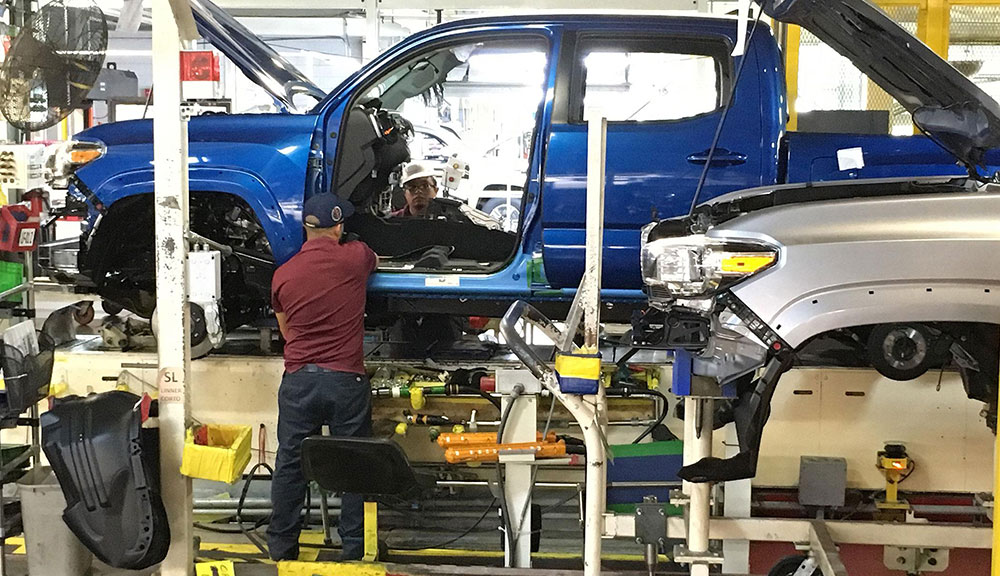 The Advent of the Virtual Assembly Line

The line between the automotive industry and technology sector is become increasingly fuzzy. The assembly line has been a standard feature for all automotive companies when it comes to production models. New concepts like just-in-time manufacturing, continuous-flow manufacturing etc have contributed to shortening the lead time from  the actual design process to the shop floor. The latest innovation in the assembly line process has been the introduction of the virtual production line.

The system is being tried out at Toyota’s plant in Texas, which specializes in the production of Tacomas and Tundras. Here, the lead engineer who is charge of vehicle design oversees the actual production and the quality of the end product and parts are made on an “immediately in time” basis, a lot faster even than just-in-time (JIT). The plant boasts what is said to be the most flexible manufacturing system in the United States, with most of the suppliers being located in the factory.

State-of-the-art digital design and manufacturing tools are used to redesign parts and tooling even during the production process. According to Mike Sweers, the chief engineer for the company’s trucks, the emphasis is on a cradle-to-grave concept of production.

The production process still begins with sketches, design, and creation of 1:5 scale clay models. The key change is that right at the beginning of the design process for a vehicle, the design team creates the  mathematical data needed for tooling and stamping feasibility . Instead of making templates, they feed the mathematical and dimensional data into a computer numerical control mill to make the clay model. After the model is honed further by human hands, the design undergoes digital surfacing (scanning/sampling), and the CAD is then cleaned up. That CAD data is sent to the Engineering and Design team, which starts breaking it into forms and parts for both interior and exterior work. The mathematical data in CAD then goes into a computer-assisted manufacturing (CAM) process.

When it comes to sheet metal body parts, in order to get a proper final angle and make alterations to the form that is the outcome of stamping, “compensation” data is fed into the machinery to get the properly contoured model. Many components of the body and mechanical parts undergo test production before the actual production process, go through test production before actual production. There are a few pieces like the instrument panels, grilles, and other parts which are not crash-critical and instead of undergoing test production will be digitally tested for attributes like structural strength, durability, and aerodynamics. In the case of these components, there will be numerous cycles of design iteration to ensure all the parameters are met before any tangible part is made.

Before anything is actually made, the design engineers and production engineers get together to make a assemble the car in virtual space. If they are any components that do not fit together then, they make changes right then.

This digital assembly extends to the building sequence of parts and subassemblies, and they can change significantly as an outcome of this process when it comes to the final production. Another benefit of this process is that it can also help with the ergonomics of the assembly line and helps to minimize any roadblocks that might arise due to unforeseen interferences.

One case where using the virtual assembly line was of benefit was in the case of the current Toyota Tacoma. The team found through CAD and a fluid dynamics software program that the actual shape of the grille holes created a pressure and flow drop from the specification and they ended up with an airflow problem. Using the virtual assembly line helped the team to quickly modify the shape and radius of the holes in the grille to confirm to specifications. Thus the team was able to stick to the pre-prediction schedule ahead of the vehicle’s launch.