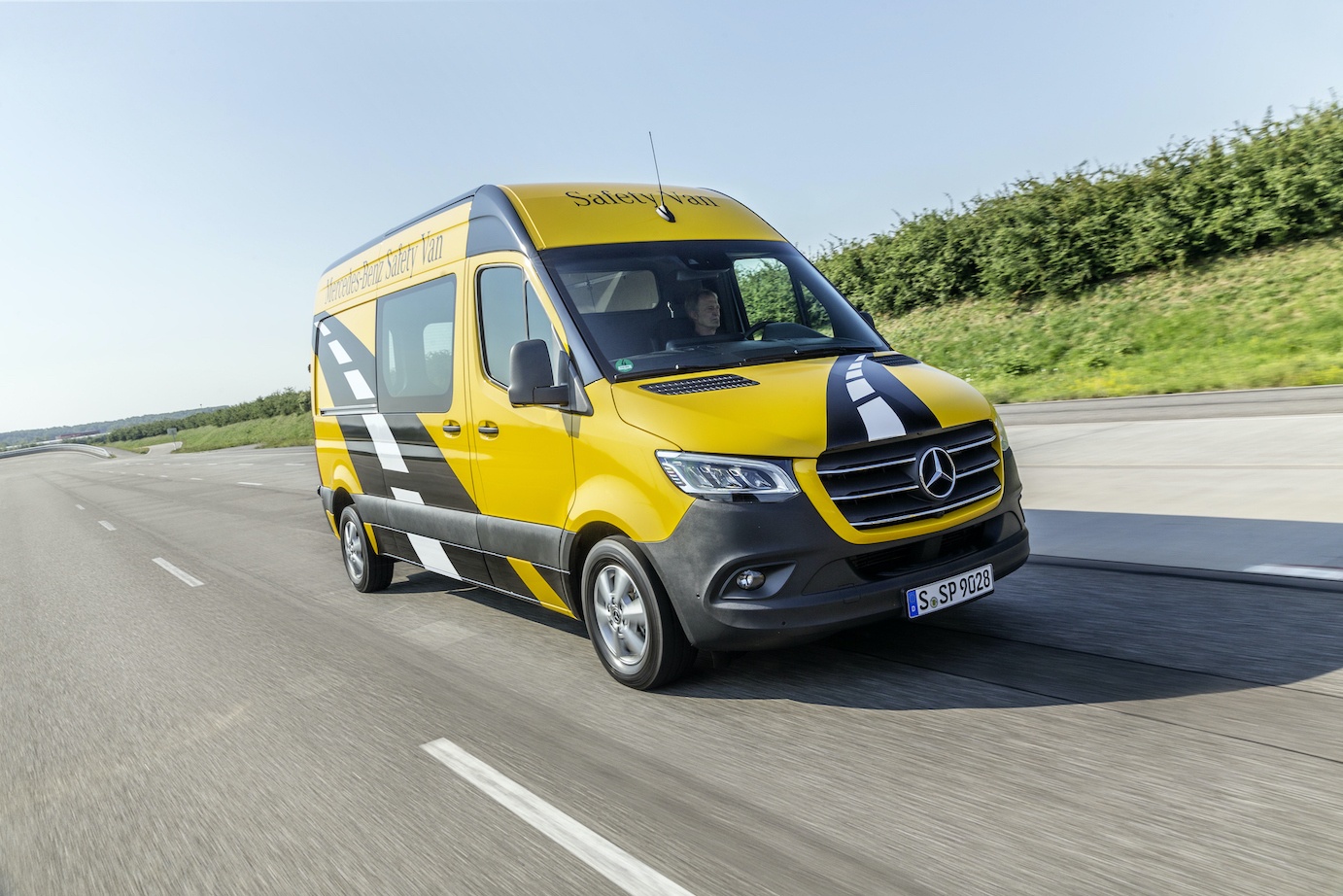 In 1995, Mercedes-Benz presented a newly developed van that quickly advanced to become the reference model for an entire vehicle category. From the start of the Sprinter’s development, it was clear that both active and passive safety would be central components of its concept. Since then the Sprinter has maintained its pioneering role in this discipline without interruption. This starts with its handling, which is similar to that of a passenger car, through to its ‘hard’ technology such as ABS and airbags as well as the latest generation of driving assistance systems. Now in its third generation, the Mercedes-Benz Sprinter continues to consistently raise the bar for all other vans.

“The Sprinter has enjoyed huge success in the MENA region since its introduction, proving popular for a wide number of applications such as ambulances, school buses and passenger transport. With each generation, the Sprinter has remained at the forefront of innovation to take the safety offered to our customers, their passengers and other road users to a new level,” says Serkan Sarikaya, Head of Sales of Mercedes-Benz Vans Middle East and North Africa (MENA).

In 1995 no other van offered more safety features. The Sprinter included disk brakes all-around, an ABS anti-lock braking system as standard, automatic brake differential, a driver’s airbag on request, three-point seat belts adjustable in height and seat belt buckles attached to the seat. The comfortable suspension and passenger-car-like handling were features not to be underestimated. That’s because more relaxed drivers remain alert for longer and therefore drive more safely. This was the basis for the Sprinter’s reputation as the epito.me of safety.

The developments didn’t stop there: in 2000 the Sprinter was given more powerful headlamps as part of an extensive facelift. In addition to active safety, Mercedes-Benz continued to advance passive safety too.

The driver’s airbag was now included as standard equipment, while a co-driver’s airbag was optionally available. The large double airbag was designed to protect both passengers occupying the co-driver bench seat. The redesign of the driver cockpit maintained the driver’s level of fitness with the appearance of a passenger car. The gear stick was redesigned as a control lever and relocated to an easy-to-reach height to further improve ergonomics – and in turn safety. The next safety feature, windowbags, were introduced in 2001.

The Sprinter was further refined in 2002 with many new safety features. New features included a more powerful brake booster and the Electronic Stability Program ESP®, installed as standard initially in the closed variant of the Sprinter up to a gross vehicle mass of 3.5 tonnes. Able to actively assist the driver in critical driving situations, ESP® was a revolution in the safety technology of vans. Just two years later, ESP® was included in the standard equipment of all Sprinter chassis up to a gross vehicle mass of 3.5 tonnes. In the following years, statistics showed accidents caused by the vehicle “leaving the roadway” were drastically reduced.

The second-generation Sprinter from 2006: safer than ever with ADAPTIVE ESP®

The consistent introduction of innovations continued, emphasised by the completely new second-generation Mercedes-Benz Sprinter in 2006. This new generation not only boasted a significantly increased cargo capacity, a GFRP transverse leaf spring at the front axle and new parabolic springs at the rear axle were soon complemented by an optional air suspension that improved both comfort and safety. The increase in comfort was particularly apparent in the driver’s level of fitness on long-distance journeys.

As ADAPTIVE ESP® was adapted to various loading conditions thanks to mass and centre of gravity detection, vehicle control was made more precise and specific in critical driving situations. ESP® was optionally enhanced with start-off assist to prevent the vehicle from inadvertently rolling backwards while pulling away on an incline.

Additional adjustable wide-angle mirror glass in the new outside mirrors provided the best possible view to the rear, plus static curve lights were available on request. A rain and light sensor took care of switching the windscreen wipers and driving lights on and off. All Sprinter vans came fitted with 16-inch wheels, the pre-requirement for brake disks with a large diameter and the corresponding performance. As a preventive measure, thoraxbags were also available in addition to the front airbags.

In 2009 ESP® received another function – trailer stabilisation. Furthermore, Mercedes-Benz introduced adaptive brake lights and the front fog lamps were relocated to a lower position to better illuminate the road. The start-off assist was now included with the optional automatic transmission.

In the summer of 2013, the new Sprinter launched with world-leading driver assistance systems for vans. Crosswind Assist celebrated its debut and showcased its ability to almost completely compensate the effects of gusts of wind on the vehicle as far as physically possible. This feature is standard equipment on all closed variants, and soon became available for Sprinters with separate bodies such as box bodies or camper vans.

Collision Prevention Assist comprises the functions of warning of a fast decrease of distance to the vehicle ahead, adaptive braking assistance system Brake Assist Pro and a further warning stage in the event of an acute risk of collision. Blind Spot Assist warns drivers of vehicles in the neighbouring lane or in the so-called blind spot when changing lanes. Lane Keeping Assist warns the driver about leaving the lane inadvertently by monitoring the roadway ahead and its markings. High Beam Assist ensures that the lane is optimally illuminated with conditional activation and deactivation of the main beam headlamps. As a result, it became almost impossible to dazzle approaching vehicles or those driving ahead.

With these driver assistance systems, Mercedes-Benz highlighted its pioneering role in launching safety technology for vans. A decisive advantage of the new driver assistance systems was the fact that they helped avoid accidents. This also applied to measures involving the suspension: lowering the suspension by 30 mm increased vehicle dynamics and steering precision perceptibly, by lowering the centre of gravity. The Sprinter now drove even more safely.

2018: the third generation of the Sprinter further increases safety

Connectivity and diversity are the focus of the third, and current, generation of Sprinters. However, regarding the safety features, Mercedes-Benz Vans also raised the vehicle to a new level. Active Distance Assist DISTRONIC, for example, relieves the driver by automatically maintaining sufficient distance to the vehicle ahead from a speed of 20 km/h. A radar sensor in the front bumper determines the data required for this. The system detects lane changes or braking manoeuvres of other road users and can react immediately – in an emergency the active distance warning assistance system can bring the Sprinter to a standstill.

Other driver assistance systems introduced to the new Sprinter include a reversing camera with an image in the inside rear-view mirror and a modern parking package with 360-degree camera, providing all-around visibility. A rain sensor and wipers with integrated Wet Wiper System provide for optimum visibility even when the windscreen is being cleaned.

Prevention is better than cure

Since 1995 the following principles have been applied to the development of the Sprinter: prevention is better than cure, and accident prevention is better than mitigating the consequences. The Sprinter benefits both from its passenger-car-like driving style and the development of driver assistance systems for Mercedes-Benz passenger cars. Their safety technology has also been introduced and adapted to the special requirements and conditions of vans, making the Sprinter the world’s safest, most reliable and versatile large van.