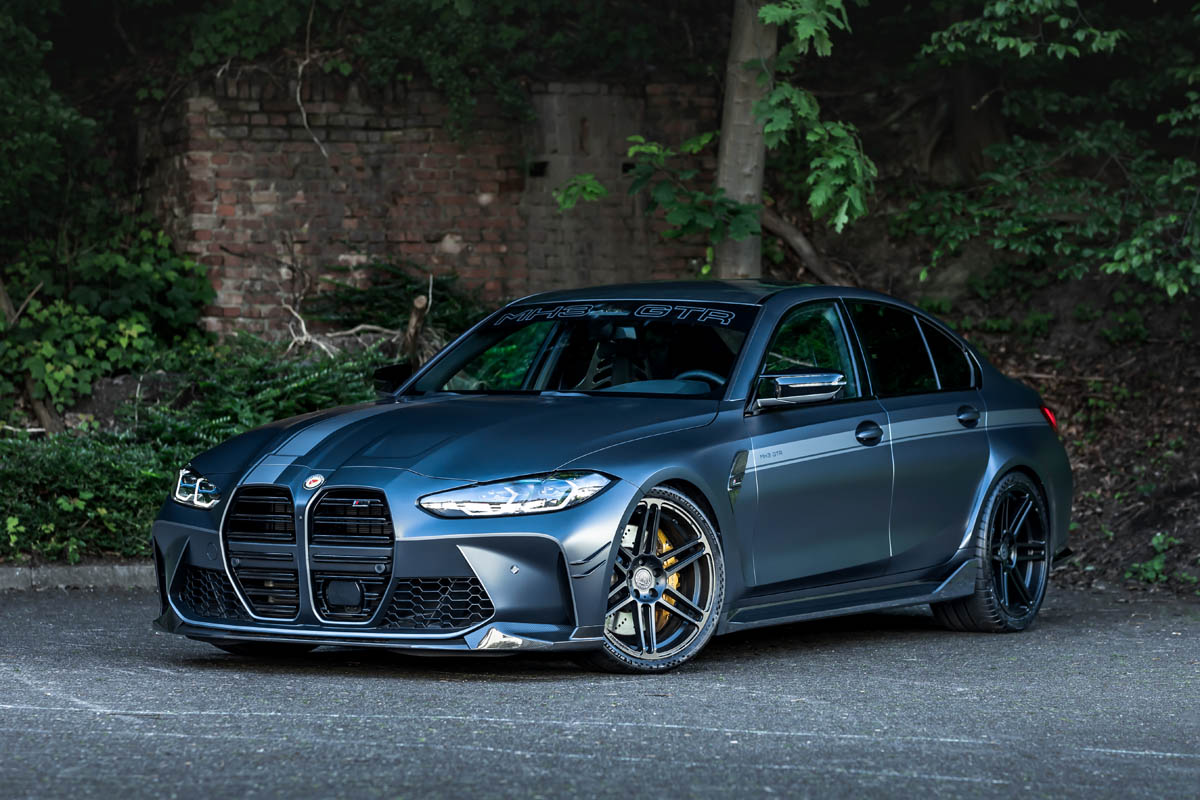 The current BMW M3 of the G80 generation has now been on the market for almost one and a half
years. Instead of once again discussing the controversial front-end design of the mid-size sports
car, which is available as a sedan and will soon be available as a Touring for the first time, we
would rather focus on the driving dynamics talents of the top model from Munich. And these are
outstanding, not least thanks to the superb S58 biturbo inline-six engine with up to 510 hp!
Naturally, the M3 has long since attracted the attention of the specialists at MANHART
Performance. The team from Wuppertal now presents its latest interpretation of the power sedan:
the MH3 GTR, which is limited to exactly one copy.
It goes without saying that a whopping increase in performance cannot be missing from the
creations from the house of MANHART: Thanks to the proven MHtronik auxiliary control unit, the
three-liter biturbo engine in the nose of the M3 Competition in the MH3 GTR strengthened from the
aforementioned 510 hp and 650 Nm to a whopping 650 hp and 800 Nm of maximum torque. In
addition, a MANHART stainless steel exhaust system with valve control ensures an even more
brute sound. It culminates in four 100-millimeter-diameter tailpipe trims, which are optionally
encased in carbon or ceramic-coated.
In addition, MANHART offers several other components for the exhaust tract, which, however, do
not have TÜV approval and are therefore only intended for export: OPF-Delete replacement pipes
with 200-cell HJS catalytic converters, an OPF/GPF deleter, and optional race downpipes without
cats or sport downpipes with 300-cell GESI catalytic converters.
To further improve roadholding and, of course, for the purpose of lowering the car, the MH3 GTR
also received a MANHART suspension upgrade, which includes either a MANHART Variant 4
coilover suspension by KW Suspensions or a MANHART lowering kit with H&R springs.
Meanwhile, the brake system remained in its standard condition, but individually configured
upgrades are also available on request.
In visual terms, the sedan also received a refinement. Absolute eye-catchers are the MANHART
Concave One rims, which are bolted to the axles in 9×20 inch and 10.5×20 inch and with a finish in
satin black. Alternatively, however, other colors are available as well as an optional gold
MANHART wheel decoration. The mounted Michelin tires measure 265/30R20 and 295/30R20.
The highlight on the body is the MANHART carbon diffuser. This is complemented by a spoiler lip
and side aero flics at the front, side skirts and a rear spoiler, all of which are also made of carbon
and come from the M Performance program. The styling is rounded off by a foil finish or the typical
MANHART decor set with, in this case, silver-grey trim strips and lettering. Last but not least, the
interior got two superlight Podium full carbon bucket seats from Recaro as an absolutely
spectacular innovation.