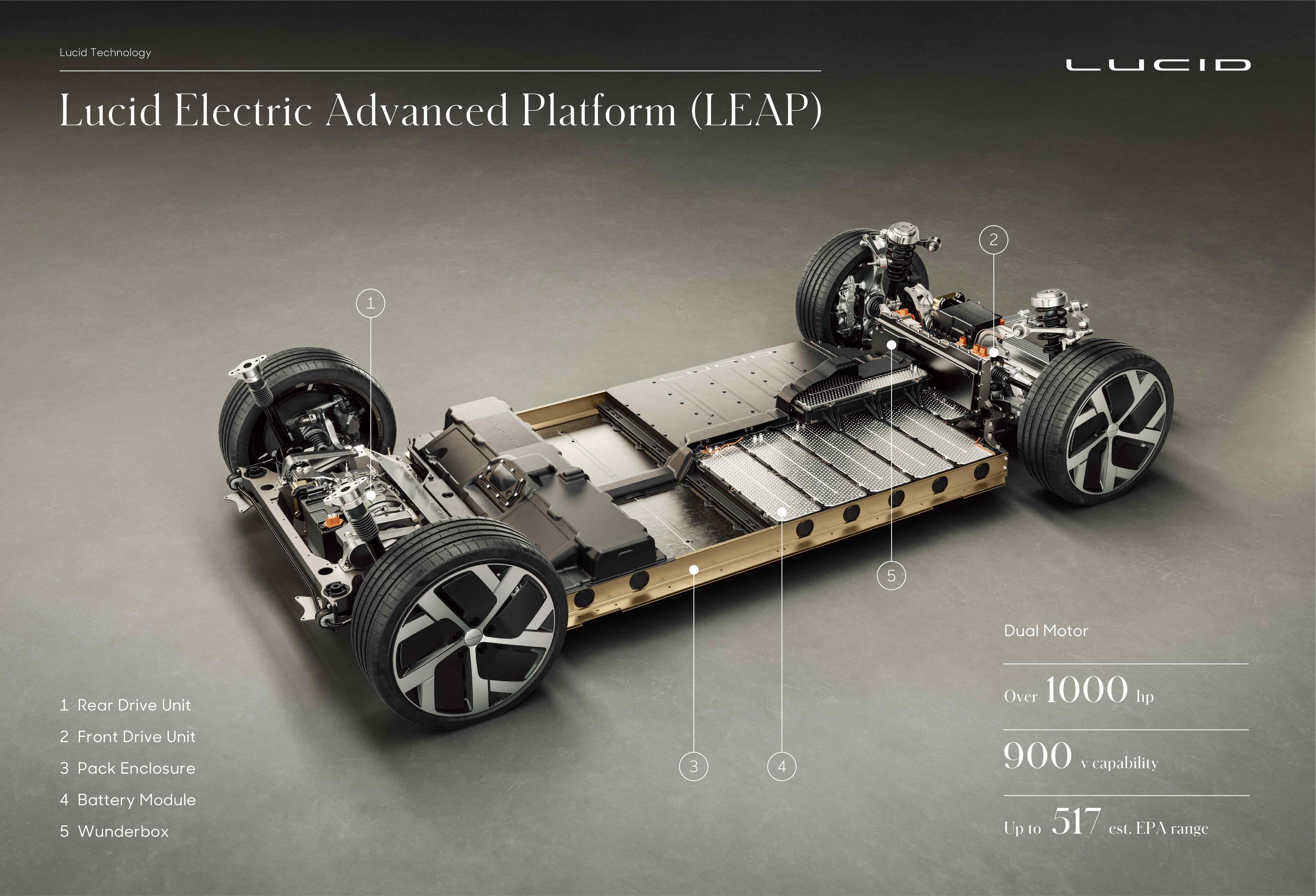 Lucid Motors which seeks to set new standards for sustainable transportation with its advanced luxury EVs, today announced details of the proprietary, in-house developed electric drivetrain that will power the forthcoming pure-electric luxury Lucid Air and allow it to become the instant class leader in a number of key performance and efficiency metrics.

With up to 1,080 horsepower available in a dual-motor, all-wheel-drive architecture, the Lucid Air is able to achieve quarter-mile times as low as 9.9 seconds on a consistent, repeatable basis. To date, it is the only electric sedan able to achieve a quarter-mile time under 10 seconds, all with an uncompromised package offering room for five passengers and class-leading interior and storage space. The power of the Lucid Air is complemented by an available extended-range capability that achieves an estimated EPA range of up to 517 miles on a single charge.

“Our watchword has been ‘focus’ since day one at Lucid – a focus on sound engineering principles, a focus on creating efficiencies, and a focus on maximizing power to create a world-class EV,” said Peter Rawlinson, CEO and CTO, Lucid Motors. “When the Lucid Air comes to market next spring, the world will see that we have developed the best electric vehicle technology possible by a wide margin and effectively created a new benchmark for EVs. The result is nothing short of a technological tour de force in every facet upon which a luxury performance car is measured.”

Lucid has been able to closely match its own computer-modeled predictions in real world testing by carefully engineering its proprietary technology with a focus on optimizing every aspect of the Air’s performance and efficiency. Starting with the in-house development of the Air’s drivetrain, Lucid created a line of powerful, compact, and ultra-efficient permanent magnet electric motors. Combining these motors with an inverter and an integrated transmission and differential creates a state of the art, 900V+ electric drive unit that weighs just 163lb (74kg) and is small enough to fit inside a standard airline carry-on roller bag. Each drive unit packs over 650hp, with a power density that is well beyond anything else offered on the EV market at 41hp per liter. This compactness allows for one, two, or even three units to be used to power a Lucid Air. In total, Lucid’s drive units are 45 percent lighter and up to 59 percent more powerful than the closest competitor. For their power, the motors are two and a half times more volumetrically compact than the closest competitor. Also notable is the fact that the motors can spin up to 20,000 rpm, a significant performance advantage over the competition.

The enablers of these outstanding electric motor characteristics include a set of inventions that are part of Lucid intellectual property. Most notably, an elegant and revolutionary new motor winding technology has been introduced to maximize power output and reduce electrical losses. The motor also features an innovative cooling system that more effectively removes heat from the stator winding, minimizing losses and boosting efficiency.

The ultra-compactness of these electric drive units lays the foundation for Lucid’s Space Concept vehicle design approach. This is achieved in part by the transmission and differential, which have been fully integrated for the first time in an electric motor – together, they comprise a single rotational system that is both lightweight and extremely efficient. Meanwhile, Lucid leverages a high voltage, silicon-carbide MOSFET system in its inverters to maximize efficiency, especially in real-world driving conditions.

An ultra-high, 900V+ architecture combined with Lucid’s Wunderbox onboard charging unit serve as the heart of the Air’s electrical platform. The Wunderbox is a unique, multi-function unit, developed entirely in-house to ensure compatibility with, and the maximizing of, charging systems of differing voltages, specifically boost-voltage charging. It also allows the Lucid Air to charge at rates of up to 300 miles in 20 minutes and up to 20 miles in one minute when connected to a DC Fast Charging network (such as those offered by Lucid’s charging partner, Electrify America, on its nationwide network). The Wunderbox also enables a wide array of future-ready, bi-directional power delivery features from the vehicle to the grid (V2G) for situations such as managing home power outages. It can also enable vehicle to vehicle charging (V2V).

Lucid drew upon 10 years of experience and over 20 million miles of real-world testing in creating its compact 113kWh extended-range battery packs with integral race-proven technology and unsurpassed energy density. Atieva, Lucid’s technology division, designed, developed, manufactures and has supplied the battery packs for the entire field of entries in the Formula E racing series since 2018 with an agreement continuing through 2022. The result is a battery system for Lucid Air that delivers unparalleled safety and race-proven performance in a form sculpted around the occupant cabin.

The production version of the Lucid Air will debut in an online reveal on September 9, 2020. In addition to the vehicle’s final interior and exterior designs, new details about production specifications, available configurations, and pricing information will also be shared.