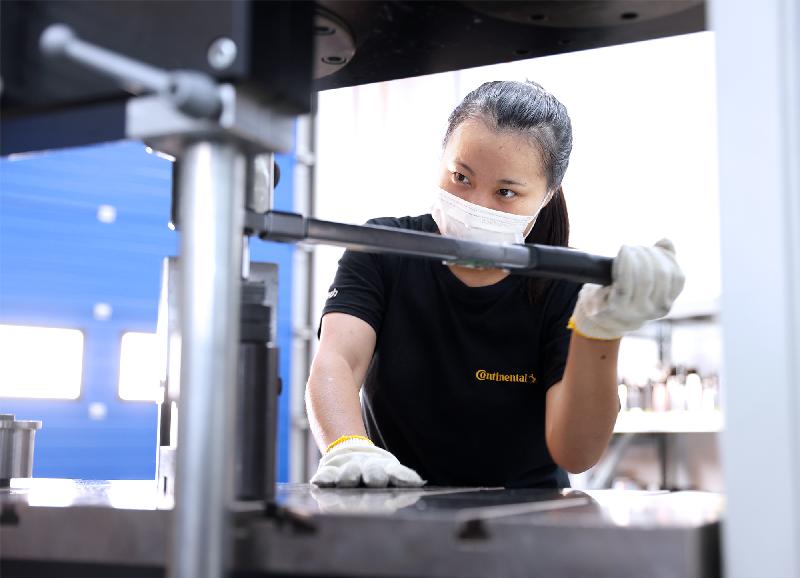 Listen Closely This is How eMobility Sounds and Swings

If you listen closely, the soundscape in a vehicle offers a
whole orchestra of different tones, even without the current hits on the radio: the airflow sometimes
rushes loudly, sometimes softly, depending on the speed. The turn signal provides a regular
rhythm. The air-conditioning compressor and servo motor hum. The tires squeal during overly
violent maneuvers. And braking as well as parking assistants beep when the distance becomes too
small. Passengers, however, hardly notice many of these sounds – at least when the vehicle is
powered by an internal combustion engine. This is because the motor drowns out most of the other
sound sources. In electric cars, on the other hand, this phenomenon, also known as the masking
effect, is largely absent – and presents the Continental team with new challenges.
With vibration technology against high whistling and dull stomach tingling
After many vehicle manufacturers initially focused on developing the powertrain and extending the
range when designing electric vehicles, other factors such as the comfort and well-being of the
vehicle occupants are now becoming increasingly important. For, even if the electric drive is
objectively quieter than an internal combustion engine, its high-frequency noises in the sometimes
four-digit Hertz range are perceived by people as an unpleasant whistling noise, for example. This
is mainly due to the different ways the two engines work: In an internal combustion engine, small
explosions are generated in each cylinder, while the electric motor drives the vehicle with the help
of a rotating magnetic field.
The feeling is also different in the electric vehicle: due to the electromagnetic force generation and
the higher speed of the electric motor, the forces and torques in the vehicle act almost
instantaneously. If the body then starts vibrating and this is further amplified by the natural
frequencies of the structure, for example the motor housing, it leads to perceptible and audible
phenomena that can manifest themselves, for example, as a dull tingling in the stomach area or a
tonal whistling. In this context, engineers also speak of NVH behavior which stands for noise,
vibration and harshness.

In order to isolate these high-frequency excitations from the engine and the road from the body as
efficiently as possible, the mounting of motors and chassis in electrically driven vehicles plays an
important role. There are plenty of parameters Continental’s mounting professionals can adjust in
concepts in order to develop an optimal solution tailored to the vehicle, starting with the design and
ending with the material.
Innovative design and optimized materials form duo
Regardless of the type of drive, a motor mount consists of one connecting element on the engine
side, one on the body side and an elastic connecting piece that provides the insulation. Whether a
three- or four-point-mounting, a bushing, cone or hydromount, a single or double isolation is best
suited depends on the requirements and vehicle platform of the respective manufacturer. With the
aid of simulation methods such as finite element analysis (FEA) and proprietary material models,
the experts can optimize the design and properties of the motor mount at a very early stage of
development, for example in terms of characteristics, strength and resistance to breaking loads or
service life. In addition, subjective and objective NVH analysis methods are also used for finetuning in the prototype phase in both the vehicle interior and chassis.

Continental’s materials experts pay particular attention to the right choice of materials. Since
electric vehicles are already quite heavy due to the large battery packs, the aim is to make the
components as light as possible while maintaining optimum performance. In this way, the range of
the vehicle can be increased. Steel, which can absorb significantly higher forces and torques due
to its high specific stiffness, or fiber-reinforced high-performance polyamides, which are particularly
light with their low density, are suitable for the connection elements. Often, constructions made of
aluminum can represent a middle ground between the two extremes.
For the actual insulating element, the Hanover-based experts draw on 150 years of experience in
rubber. The compounds for electric motors also differ from those for internal combustion engines:
The rubber compound is exposed to lower temperatures in the engine compartment. Therefore, the
target conflict of the compound recipe can be shifted toward dynamic hardening and service life.
The challenge for the insulating element lies primarily in finding the right static and dynamic
stiffness as well as durability for optimum insulation and maximum safety – so that the noise
experience resembles a pleasant sound carpet rather than annoying discords.