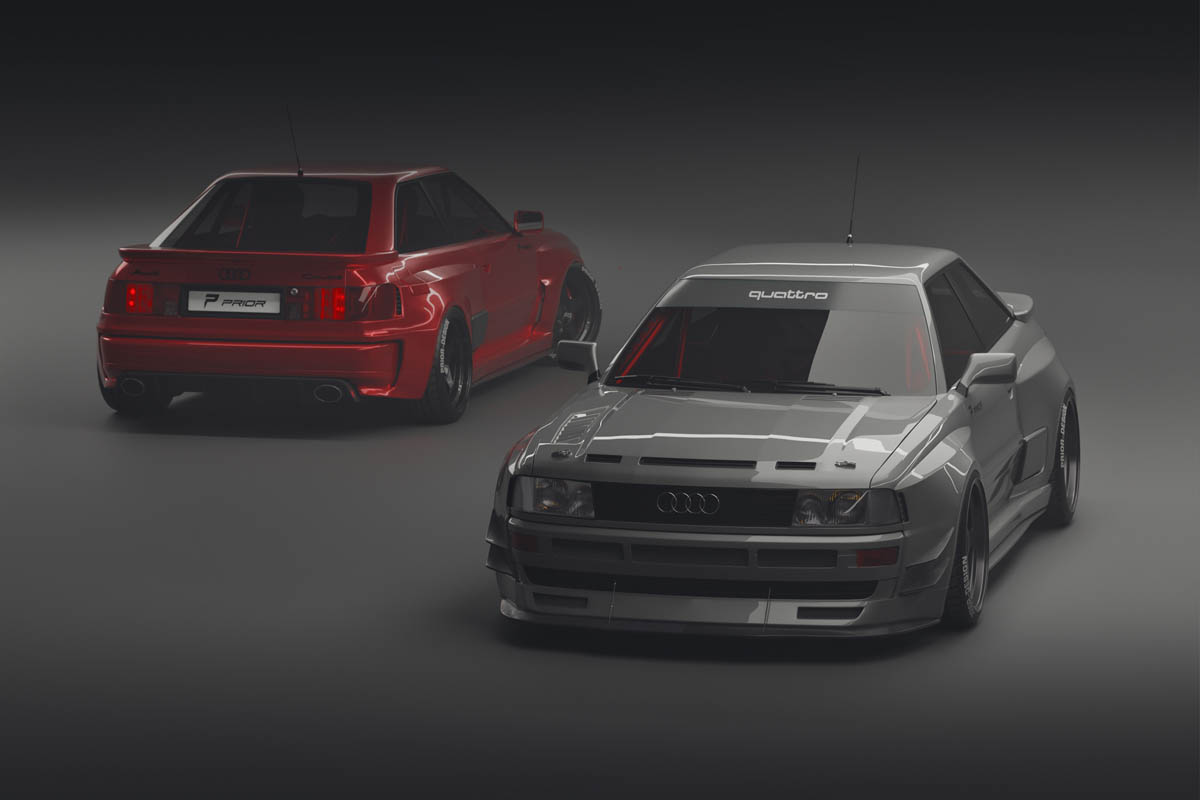 Wide-body vision of an “Audi RS2 Coupé”: the fruit of a successful collaboration
between PRIOR Design, JP Performance and Dr. Crazy.
The quattro, introduced back in 1980, is a true legend of the automotive industry.
And so, too, is its offshoot that inspired the unforgettable rally race car – the
Sport quattro. It is celebrating its 40th birthday in 2020 and, to mark the occasion
and as a thank you to Audi, PRIOR Design – in cooperation with Jean Pierre
Kraemer at JP Performance and Dr. Rouven Mohr “Dr. Crazy” – has designed a
truly unique and impressive wide body aero kit for the 90s descendant of the
quattro based on the Audi 80 B3.
While the most powerful variant of the Coupé was the S2, the equally legendary
Audi RS2 was only available as an Avant. But what would it have looked like if
Audi had built a Coupé variant back then? PRIOR Design has answered this very
question in spectacular style. The result of four months of design and
development work is a truly inspiring and utterly unparalleled masterpiece. Its look
is inspired by current RS models and has been embellished with various elements
that are reminiscent of the original quattro.
This desire to return to the roots is exemplified by the wide bodywork extensions
at the front and back, which make the car look extremely sturdy and powerful.
The team also fitted new rocker panels with blade attachments. The engine
hood also evokes the Sport quattro with its three air intakes over the radiator
grill. And thanks to a new bumper with spoiler and a more prominent spoiler lip
as well as side cup wings, the front now looks much more virile and aggressive.
It has the appearance of a thoroughbred high-performance sports car or even
race car. The ingenious design is completed in equally beefy style by a new rear
skirt complete with a striking diffuser insert that has four pronounced fins,
providing an outlet for a thick exhaust tailpipe on each side.
In keeping with the number of years that have passed since the introduction of
quattro, PRIOR is offering a strictly limited number of 40 wide body aero kits for
the Audi Coupé. The manufacturing is naturally of the highest standard and
comes with the “Made in Germany” seal of quality from their headquarters in
Kamp-Lintfort. Every single body kit will also be personally signed by PRIOR
Head Designer Andreas Belzek as well as Jean Pierre Kraemer and Dr.
Rouven Mohr. The start of sales for pre-ordered kits will be published on
www.prior-design.de in September.
Engaging infotainment about PRIOR Design and their innovative styling
products can also be found on their YouTube channel “priordesign”.