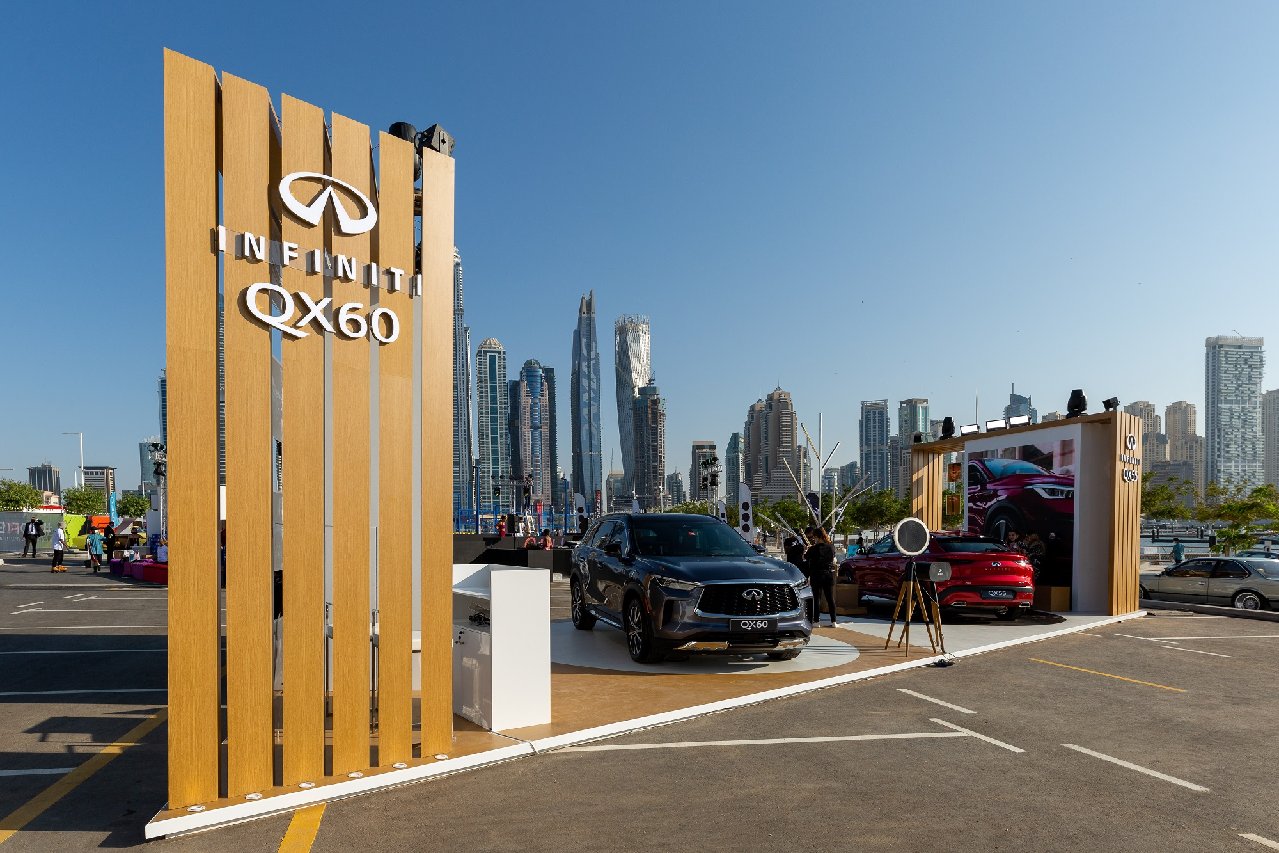 INFINITI presents exquisite modern Japanese luxury at the #NoFilterDXB with the all-new QX55, and next generation QX60 premium SUVs

INFINITI Middle East exhibited its two newest premium SUVs – the all-new QX55 and next-generation QX60 – in a Japanese lifestyle-themed concept during the rebranded Dubai International Motor Show, #NOFILTERDXB. Taking place at the Dubai Harbour from 24 to 27 November 2021, every element of the INFINITI display aimed at expressing ‘omotenashi’, a concept of Japanese hospitality, which means “to wholeheartedly look after guests”.

Guests were greeted with a subtle, yet striking conceptual representation of the cherry blossom tree centerpiece – a delicate steel and LED-light fixture, blooming with hanging origami. The Japanese art of origami is a special inspiration and key component to the brand. It can be seen in the iconic grilles of INFINITI models and is also one of the artistic components used in the next-generation QX60 as part of its reimagined and premium design language. In honour of the United Arab Emirates’ 50th National Day, INFINITI highlighted the opportunities that the UAE has provided to all those who have experienced it. In symbolism, the cherry blossom represents revival and rebirth, and visitors were invited to anonymously write down their figurative experiences of revival or rebirth in the UAE on origami paper, and craft a piece of art to hang on the tree.

At sunset, visitors to the INFINITI display were treated to the urban musical stylings of DJ Tala Samman, highlighting the stylish, provocative and youthful personality of the daring all-new QX55.

Making its official Middle East debut a day ahead of #NOFILTERDXB, the INFINITI QX55 is the spiritual successor to brand’s iconic FX series and latest addition to the automaker’s line-up.

With a provocative and refined design, the QX55 inserts INFINITI back into a category it helped to create, featuring its signature double-arch grille with origami-inspired mesh pattern and flanked by standard LED headlights that mimic the human eye, as well as elegant and flowing lines reach from the hood across the doors to the rear, with standard twenty-inch wheels which assert the SUV’s dynamic presence. The rear of the QX55 is an interpretation of Japanese minimalism highlighted by digital “piano key” taillights that combine 45 separate LEDs to create an elegant light signature.

The crossover is powered by INFINITI’s award-winning and innovative Variable Compression Turbo four-cylinder engine that outputs 268 horsepower and delivers enhanced efficiency or on-demand power, based on the driver’s needs. That power is shifted through a confident Continuously Variable Transmission with manual shift mode and delivered to INFINITI’s Intelligent All-Wheel Drive system, which is standard on all QX55 models.

The all-new 2022 INFINITI QX60 three-row SUV packs a raft of INFINITI’s intuitive technology features that make it the automaker’s most dynamic premium SUV, all paired to a carefully crafted interior and sleek exterior.  Globally unveiled in the UAE as one of three markets in the world, the reveal featured a short film starring award-winning actress Kate Hudson, and directed by Zack Snyder.

The all-new model is reimagined to deliver luxury that should be lived in, and ushers in a refined, modern look for INFINITI with details inspired by Japanese artistry: kimono folds in the headlamps, the signature origami in the grille, and the aesthetic of ripples on a pond interpreted in the leather-appointed seats.

An understated character line runs the length of the QX60, bisecting its equally appealing, available two-tone black roof from its lower body. At the rear, digital piano key lighting creates an unmistakable look at night that echoes the distinctive front LED headlamp display.

All grades feature ergonomically designed “zero gravity” seats, developed in a joint study with Yamazaki Laboratory at Keio University to reduce pressure on the hips, available  in-seat massagers in the first row and climate-control. The all-new QX60 can seat up to seven passengers in luxury as well as standard second row captain’s chairs exclusive to the QX60 AUTOGRAPH grade level.

The  QX60 is powered by an award-winning, 279-horsepower 3.5-liter V-6 engine, paired with an all-new 9-speed automatic transmission for a responsive drive that’s quiet, confident, and poised. Intelligent All-Wheel Drive is available on the 2022 INFINITI QX60 and is significantly enhanced.

The debut of ProPILOT Assist for INFINITI in the region makes use of camera and radar to support the driver. It is designed to reduce the stress of stop-and-go driving by helping control acceleration, braking and steering during single-lane highway driving.

The INFINITI QX55 will be available across in region in early 2022. The arrival of INFINITI’s all-new QX60 will soon be announced.