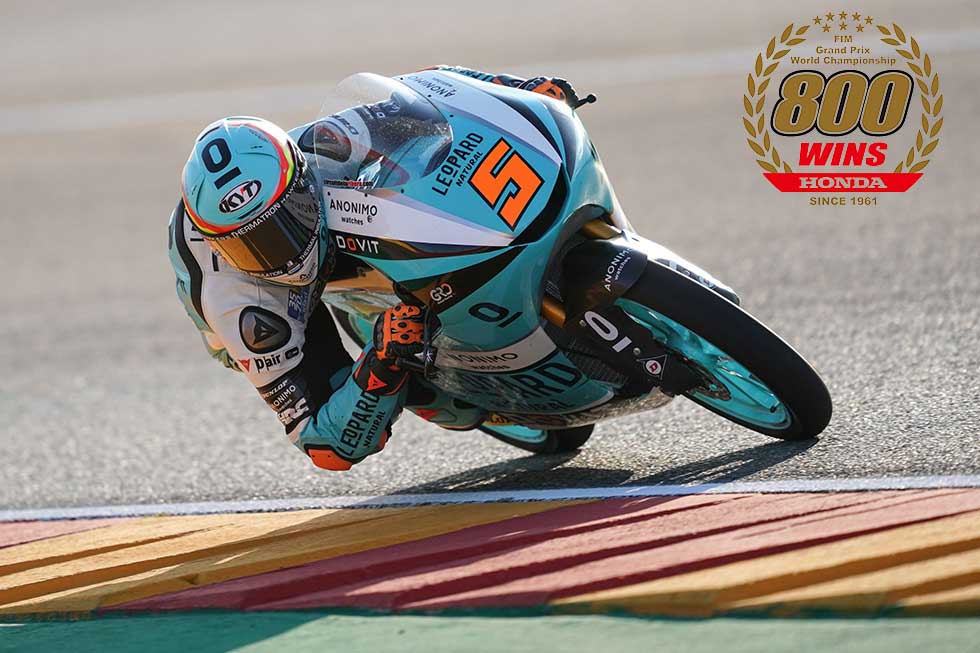 Honda Moto3 rider Jaume Masia (Leopard Racing NSF250RW) claimed victory in the Moto3 class, in Round 12 of the 2020 FIM*1 World Championship Grand Prix held at MotorLand Aragón in Spain. Beginning with its first world grand prix race in 1961, in the 125cc class of the Spanish Grand Prix, Honda has now achieved an unprecedented 800*2 grand prix wins.

In 1954, Honda’s founder Soichiro Honda declared entry into the premier motor sports event of the time, the Isle of Man TT, aiming to “realize the dream of becoming the world’s best.” After five years of developing a racing machine, Honda became the first Japanese motorcycle manufacturer to enter the Isle of Man TT race. The following year, in 1960, Honda began competing in the 125cc and 250cc classes of the FIM Road Racing World Championship, and in 1961, Tom Phillis won the season-opening Spanish Grand Prix, giving Honda its first victory. Since then, Honda forayed into the 50cc and 350cc classes in 1962, and the 500cc class in 1966, and won the championship in all five classes in 1966. By the end of the 1967 season, when Honda paused its factory racing activities, to be restarted 11 years later, it had accumulated 138 grand prix wins.

In 1979, Honda returned to FIM Road Racing World Championship racing in the 500cc class. Three years later in 1982, American rider Freddie Spencer won Round 7 in Belgium on his Honda NS500, giving the company its first victory since returning to world grand prix racing. Honda then went on to win grand prix races in the 125cc and 250cc classes as well.
As a result, Honda achieved its 500th victory in 2001, when Italian rider Valentino Rossi won in the 500cc class at the season-opening Japan Grand Prix. In 2015, Marc Márquez on his Honda RC213V gave Honda its 700th grand prix win when he took the checkered flag in the MotoGP class of Round 10 at the Indianapolis Motor Speedway in Indiana, USA.

“I am proud of Honda’s 800th FIM World Championship Grand Prix victory. I am deeply grateful to the Honda fans worldwide for their contributions to, and unwavering support for Honda’s racing activities. I would also like to thank all of those before us for their passion and dedication to overcome the countless problems and lead us from 1959 to where we stand now. Honda sees this moment as a waypoint, and will continue to fight for victory. We look forward to your continued support.”