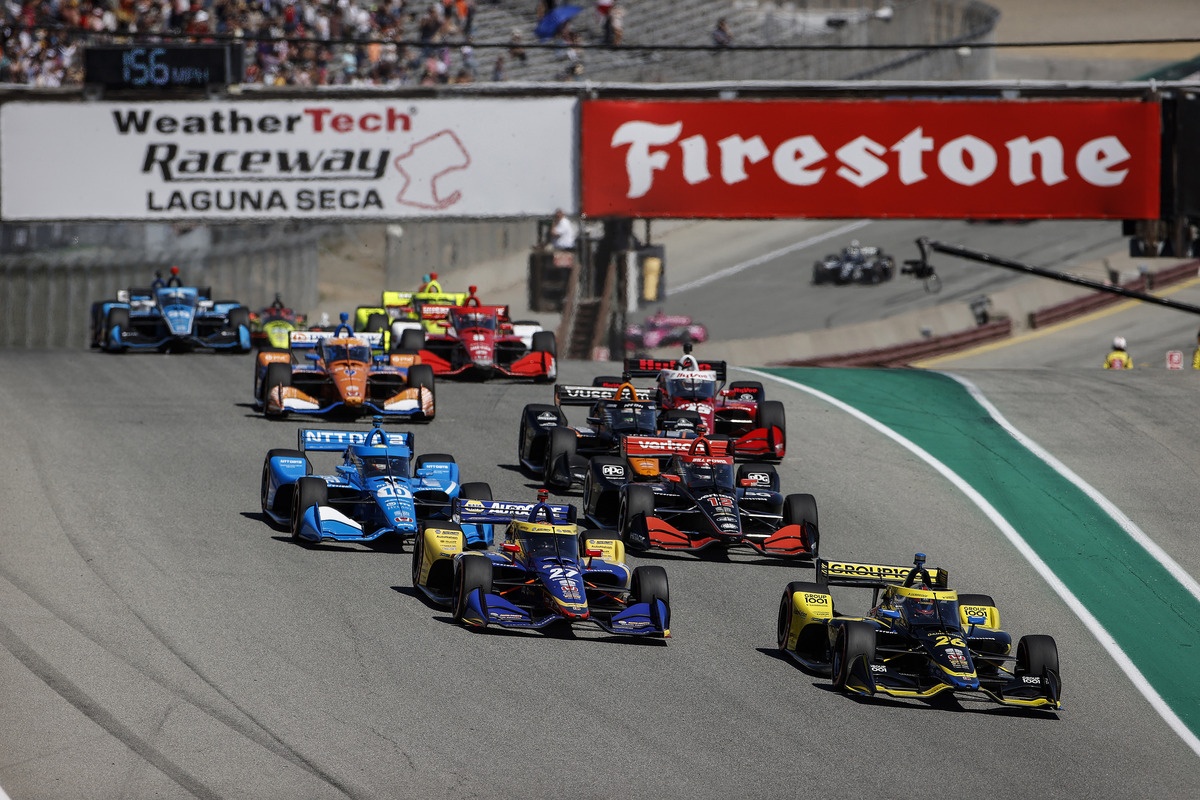 The Honda one-two-three result was led by Andretti Autosport’s Colton Herta, winning from pole for the second consecutive time – just as he did in the series’ last visit to Laguna Seca in 2019. Herta would lead all but four laps in today’s 95-lap event en route to his second victory of 2021.

Championship points leader Alex Palou finished second, extending his points lead over Pato O’Ward to 35 with one race remaining. Former F1 driver Romain Grosjean advanced from 13th on the grid, and surviving late-race contact, to round out the podium in the #51 Dale Coyne with RWR Honda.

Graham Rahal finished just off the podium in fourth position, completing a Honda sweep of the top-four positions of the day. For Rahal, it was his seventh top-five finish of the year.

Quotes
Colton Herta (Andretti Autosport Honda) Race winner, his second win of 2021 and fifth career Indy car victory: “I just enjoy racing here [at Laguna Seca] so much. It’s an amazing track, and it’s been so good to me and my family [father Bryan Herta also has two Indy car wins here]. To go ‘two-for-two’ so far in my career is incredible. We were fast all weekend, and I was happy that we could seal the deal in the race. The was always pressure from [second finishing] Alex [Paou] behind me. He really closed the gap between us back up at the end of each stint, and at the end of the race. I’m just so happy. This is my favorite track in North America, by far. To win here, it means so much.”

Alex Palou (Chip Ganassi Racing Honda) Finished second, leads Drivers’ Championship by 35 points with one race remaining; can clinch his first title by finishing 11th or better at next weekend’s Acura Grand Prix of Long Beach: “It was an amazing day. I was surprised to find we were really competitive with [Colton] Herta in the race. We weren’t able to win today, but I was trying my best for the entire race, and we were able to do the best we could do. It was exciting with [Romain] Grosjean catching us there at the end. I think it was an amazing race.”

Romain Grosjean (Dale Coyne Racing with RWR Honda) Finished third: “The last stint was very (sic) fun. We had fresher tires than everyone else and it was exciting to catch and pass so many people. It’s been a great day. I’m sorry to Jimmie [Johnson] for our contact out there. He was trying to protect [teammate] Alex [Palou], but I wanted to go and chase Alex! So P13 [at the start] to P3 [at the finish], it was a pretty good day!”

David Salters (President, Honda Performance Development) on today’s championship- clinching race at Laguna Seca: “This is a moment where I would like to thank all of the stupendous efforts of our team at HPD – who work really hard and are always trying to improve themselves – and days like this just validate their efforts. This is our fourth consecutive Manufacturers’ Championship, our 10th total it comes on the 25th anniversary, almost to the day, of our first IndyCar title. It just shows how serious Honda is in developing people and technology through motorsports. Massive thanks to Honda, massive thanks to our brilliant team, and our brilliant teams! And what a way to win in, we had another sweep this weekend thanks to Colton, Alex and Romain – superb efforts. Well done!”

Next
The NTT INDYCAR SERIES concludes next weekend with the Acura Grand Prix of Long Beach, which will decide the 2021 Drivers’ Championship.