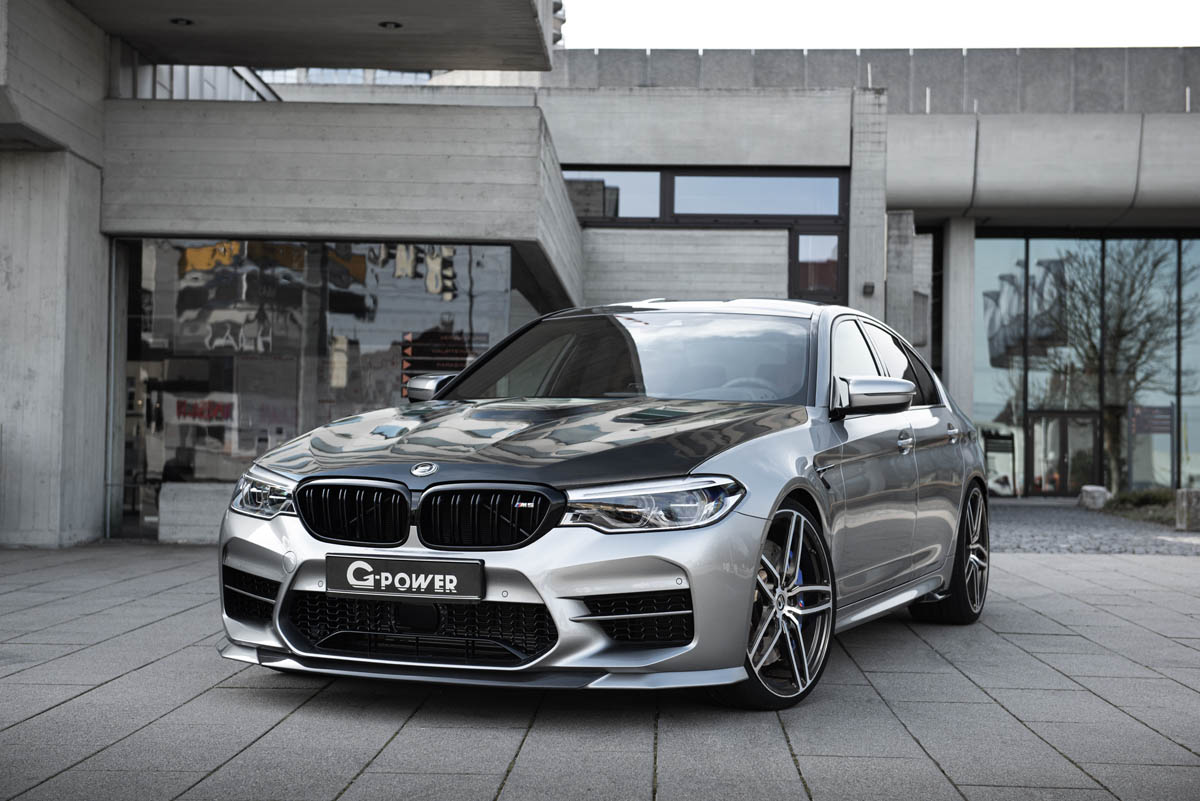 The BMW M5 has been around for 35 years now – almost as long as the G-POWER brand, which is a couple of years older. And just like G-POWER, the M5 has reinvented itself time and time again over the last three decades – and has thus always been the paragon of its time. At the beginning of its career, the M5 was a relatively unremarkable mid-range sedan with an in-line six-cylinder engine and – for today’s standards – a relatively tame 286 hp. Since then, however, it has transformed into a veritable sports star, with the latest generation packing a powerful 4.4-liter V8 with twin turbochargers and 625 hp as standard (Competition model).
Likewise, when it comes to G-POWER, change is the only constant in its history. The success of both G-POWER and the M5 is based on always being open to new, innovative ideas and to occasionally go down radically different paths to the automotive mainstream. For example, in 2007, when BMW pioneered the concept of transposing the high torque of Formula 1 race cars to a series vehicle – which produced the legendary M5 E60 with V10 engine – G-POWER suddenly moved its entire company headquarters from one side of Germany to the other. Thanks to this courageous decision, one of the most spectacular specimens in the BMW M5 ancestral gallery was born: the G-POWER M5 HURRICANE. With a maximum speed of 366 km/h, it is the fastest sedan in the world.
But this world has turned onward and, today, the challenges facing luxury car tuners like G-POWER are no longer limited to traditional engine design, but rather extend to the digital world of bits and bytes, which define the current limits of what is technically feasible in the tuning industry.
The G-POWER core team headed by Zoran Zorneke, Dirk Ochmann and Bujar Bunjaku identified this shift in required tuning expertise away from classic metalworking skills to modern tools for electronic performance enhancement as early as 2014 and accordingly set the course to once again radically change G-POWER’s approach to turbo models. A complete restructuring of the brand at the end of last year used old ballast to create a streamlined and agile organization, which G-POWER made possible via its decades-old worldwide network and access to the right expertise for the relevant project, meaning that development processes can be made far more flexible and efficient.
With their sharper focus on turbo technology, G-POWER have also expanded their portfolio of car makes: Once solely BMW tuners, they now offer a comprehensive performance package for the Mercedes AMG models with 5.5-liter or 4.0-liter V8 twin- turbo engines.
The latest product of G-POWER’s efficient development processes is the new G5M HURRICANE RR. As the RR in the name suggests, G-POWER has once again lent their hand to the famous 4.4-liter twin-turbo V8 (S63B44T4) and achieved an additional power boost: Now, the spec sheet for the RR records a whopping 900 hp and a mighty maximum torque of 1,050 Nm (limited). As usual, G-POWER achieved this through a combination of software and hardware upgrades.
After being developed during the winter of 2019/2020 and tested from April 2020, the G5M HURRICANE RR is now ready to be sold to customers. The vehicle was completely overhauled – take the engine, for example, which was given forged pistons and modified connecting rods as well as a larger radiator and reinforced drivetrain. All engine parts were tailored and manufactured specially for G-POWER. The factory turbochargers have been replaced with two superior specimens with an enlarged intake and exhaust region and CNC-milled housings.
G-POWER then fitted their stainless-steel exhaust system with four carbon-coated 101- millimeter tailpipes, which adjoin the turbochargers via downpipes with sports catalytic converters. To finish it off, G-POWER installed their GP-900 performance software.
In any engine tuning operation, G-POWER places great value on a coherent complete package that guarantees great drivability as well as unchanged engine longevity and reliability. This has been helped in no small part by the thermal improvements, which include the striking GP Venturi carbon fiber engine hood: Thanks to its “Dynamic Venting” technology, the hood optimizes airflow in and out of the engine bay. And for even greater aesthetic individuality and a reduction in the unsprung mass, HURRICANE RR forged rims in 9″x21″ and 10.5″x21″ with 285/30 and 295/30 Michelin tires were fitted. And to ensure that this wheel/tire combination adheres perfectly to the road, G-POWER Variant 4 coilover suspension was added – aside from providing an adjustable chassis-lowering function (FA 15–30 mm, RA 10–30 mm), it also enables separate adjustment of the compression and rebound damping.
By the way: The power output of 900 hp is achieved without the “vitamin B injection” (e.g. methanol or fuel boosters) often used by competitors. And although G-POWER advertises the G5M HURRICANE RR with 900 hp, this is a very conservative figure. What the vehicle is actually capable of was shown during a neutral and independent test bench run at GeigerCars in Munich.