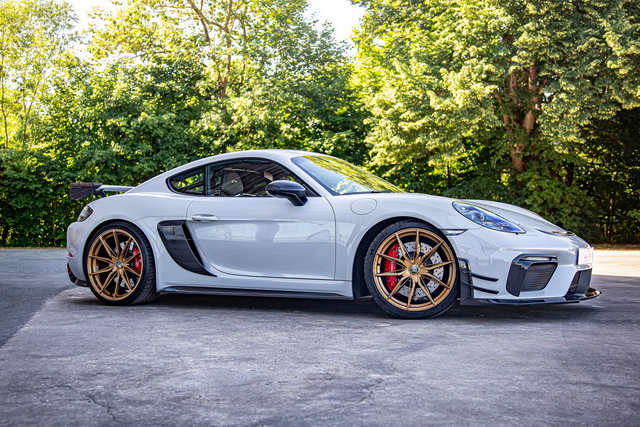 In order to let the GT4 engine breathe out even more freely and generate even more extra power as a result, FRIEDRICH PERFORMANCE MANUFAKTUR developed two additional upgrades for the exhaust system. Precision-designed and manufactured stainless headers replace the production components on both sides of the engine. They can be ordered with high-efficiency thermal insulation, as can the 200-cell metal catalysts. The complete FRIEDRICH PERFORMANCE MANUFAKTUR high-performance exhaust system saves 12 kilograms in weight over the stock system and boosts peak power of the engine by 25.8 kW / 35 hp while producing about 30 Nm more torque.

The mid-engined racer is even more dynamic with around 455 horsepower under the hood.  From rest, the tuned coupe takes only 4.1 seconds for the sprint to 100 km/h. Just ten seconds later, the two-seater is already traveling at 200 km/h. The top speed is north of 305 km/h.

Of course, the aerodynamics also play an elementary role in these speed ranges. For this reason FRIEDRICH PERFORMANCE MANUFAKTUR developed naked-carbon components that underscore the racing looks and thanks to their sophisticated shape further reduce lift at the front and rear axle. The refinement specialist produces all bodywork components from this hi-tech composite material in its own Manufaktur craft production facility.

The three-piece FRIEDRICH PERFORMANCE MANUFAKTUR front spoiler, which juts out further than the production component, gives the 718 Cayman GT4 a markedly sporty facelift and optimizes the handling stability at high speeds to boot. Two spoiler flaps mounted on each side above the carbon air outlets ahead of the front wheel wells add further aerodynamic finishing touches.

The carbon covers for the large side intakes in the front fascia optimize the airflow to the radiators and front brakes. The FRIEDRICH PERFORMANCE MANUFAKTUR carbon trim on top of the front bumper provides yet another sporty visual upgrade.

The FRIEDRICH PERFORMANCE MANUFAKTUR rocker panels route the air past the rear wheel arches with as little turbulence as possible and visually give the GT4 an even lower stance.

The strong suit of the carbon mirror covers and the triangular covers behind them is their attractive design, while the FRIEDRICH PERFORMANCE MANUFAKTUR airbox cowls for the air intakes in the rear quarter panels magnify the motor racing looks. What is more: They optimize the supply of fresh air to the engine as well.

The German automotive refinement specialist also does some aerodynamic fine-tuning at the rear. It fits the rear wing of the GT4 with carbon sides that have a lower edge and with a carbon Gurney flap, which serves as a trailing edge on the wing profile and produces more downforce at high speeds.

FRIEDRICH PERFORMANCE MANUFAKTUR modifies the rear fascia as well. The production centerpiece is replaced by an aerodynamically efficient carbon diffuser fitted with cutouts for the two stainless/carbon tailpipes of the exhaust system. It also has vertical diffuser fins, which channel the airflow precisely and thereby ensure additional rear-axle downforce. Carbon components on either side join the diffuser to the wheels arches on the left and right.

The spectacular looks of the FRIEDRICH PERFORMANCE MANUFAKTUR bodywork refit is rounded off by tailor-made alloys with delicate ten-spoke design. Opting for front wheels of size 8.5Jx20 and 11Jx21 rims on the rear axle gives even more emphasis to the wedge shape of the sports car. FRIEDRICH PERFORMANCE MANUFAKTUR chose tires of sizes 235/35 ZR 20 and 295/25 ZR 21 as the optimal solution.

In addition, FRIEDRICH PERFORMANCE MANUFAKTUR offers three different coilover suspensions for lowering the ride height of the two-door by up to 45 millimeters while also firming up the damping. There is also a variant designed specifically for use on the racetrack, which allows tailoring not only the vehicle ride height, but also the compression and rebound stages of the damping precisely to the driver’s wishes. Special strut mounds ensure even more direct handling.