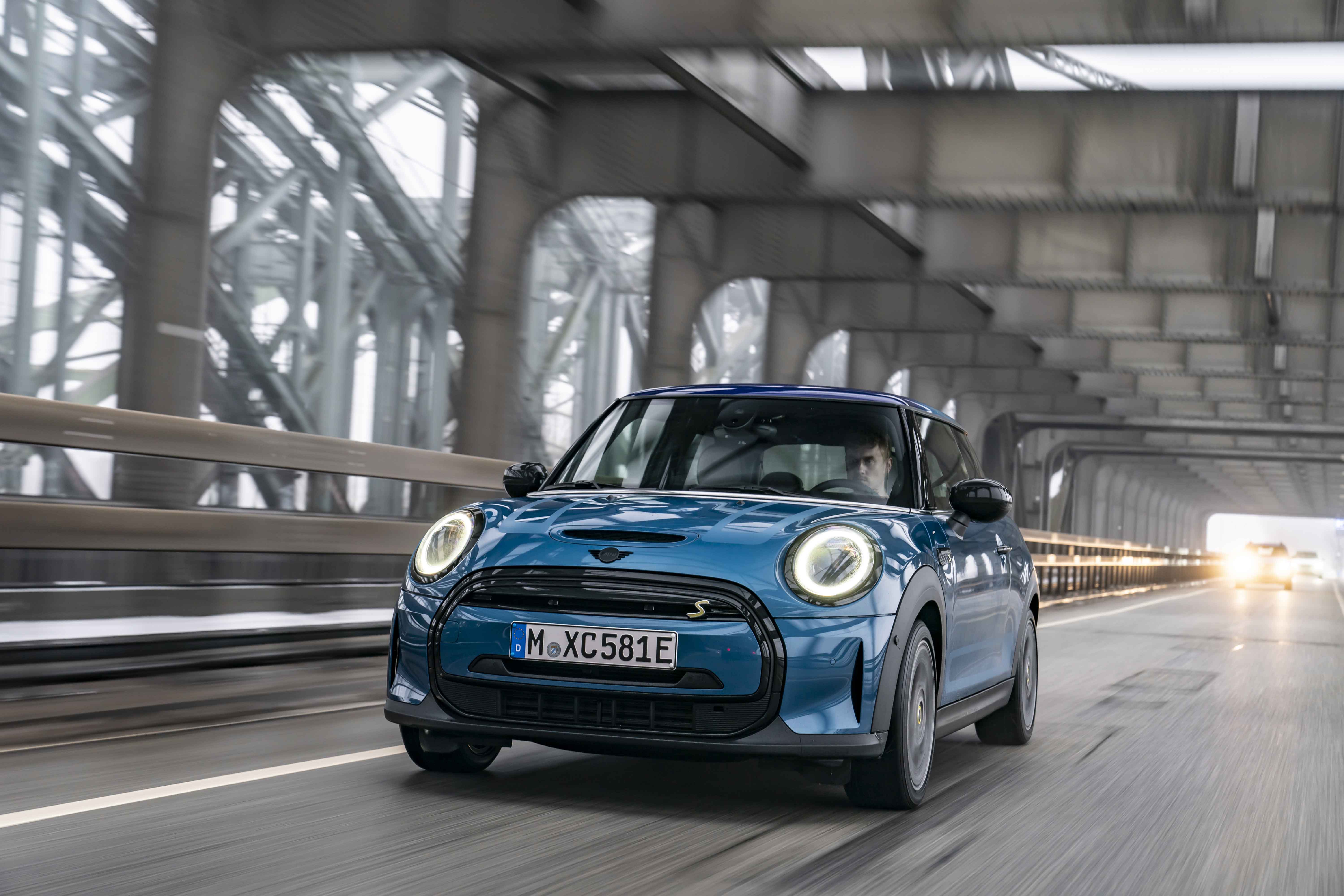 Experience the green metropolis of Hamburg with the mini cooper se.

Anyone approaching Hamburg from the south will immediately be traveling along historic paths. The route leads over the almost 500-meter-long steel bridge of June 17, which runs parallel to the Old Elbe Bridge, opened by Kaiser Wilhelm II in 1899. There, the MINI Cooper SE (fuel consumption combined: 0.0 l/100 km;

electricity consumption combined: 17.6 – 15.2 kWh/100 km according to WLTP,
16.1 – 14.9 kWh/100 km according to NEDC, CO2 emissions combined: 0 g/km) glides almost silently towards the city. Past the spacious wholesale market halls, where
traders stock up on fresh fruit and vegetables early in the morning to supply the markets. Among them the Isemarkt, a Hamburg institution, 600 meters long and sheltered from the rain under a subway viaduct, one of the most beautiful weekly markets in Germany.

Large parts of Hamburg are architecturally characterized by brick buildings made
of red clinker – from single-family homes and villas in the Elbe suburbs to housing estates in classic working-class neighborhoods to the Chilehaus, a 1920s office building with four million clinker bricks used, that has been described as an “architectural wonder of the world“ and stands directly at the entrance to the city center. From there, turn left towards the “Alte Speicherstadt”, the world‘s largest historic warehouse complex, built at the end of the 19th century. There, too, it‘s red

brick as far as the eye can see. The district has been a listed building since 1991 and is on the UNESCO World Heritage List.

Every visitor to Hamburg should take a harbor tour in the summer in a small barge that also passes through the canals of the Speicherstadt – this aroma of freshly roasted coffee, tea and spices is unique and will be remembered forever. Of course, Hamburg does not only consist of clinker brick buildings. But they have tradition. And tradition is very important in a proud Hanseatic city. Years ago, the public was divided into two camps: glass or brick was the question. Famous architects such as Hadi Teherani had set the long-established Hanseatic citizens on edge with new glass buildings. Modern, yes, but brick, please. That‘s how it is in Hamburg, that‘s how it was, and that‘s how it will probably remain for a long time.

The ravages of time don‘t necessarily gnaw away at the brick, but they do at one opinion or another. Nowhere is this more evident than in the transition from the old Speicherstadt to the new Hafencity. While the old buildings still breathe and exude history and emotion, the new quarter is dominated by architectural coolness, which almost automatically leads to the question: Do you want to live here? Many thousands of Hamburg residents have long since answered “yes“ to this question. There is a school, a university, a science center, a cinema, galleries, new subway stations, kindergartens and soccer fields. And houses on stilts are being built in the water at Baakenhafen. There is still a lack of trees and green spaces that characterize the Hanseatic city in other neighborhoods. But it is not a neigh-borhood of the well-heeled. That‘s because of Hamburg‘s mix of thirds. Some of the new apartments are chic and expensive property – with spectacular views of the harbor. Another third was built by joint building ventures or cooperatives, and the rest is social housing. The result: today, more young families with average incomes live in the Hafencity than in many other neighborhoods in the city.

And then, of course, there is the “Elphi“, the new landmark of the Hanseatic city. The controversy over the Elbphilharmonie‘s fabulously high construction costs has almost been forgotten. For visitors to the city, there is only one motto: go and see it. The Plaza is accessible to all and can be reached via an 82-meter-long, elegantly arched escalator. The view from this gallery terrace, which leads once around the glass cube, is simply gigantic. And those who – as soon as this becomes possible again – are lucky enough to get hold of a concert ticket, sit in the Great Hall and continue to marvel. None of the 2,072 seats in the 16 steep tiers is further away from the conductor than about 30 meters. Experts rave about the sound in the favorable seats at the very top. This democratic musical enjoyment is thanks to
the Japanese acoustician Yasuhisa Toyota.

Bricks and glass, tradition and modernity – it has long been the mixture of the two that makes Hamburg so appealing. Perhaps that‘s why the MINI Cooper SE fits perfectly into the streetscape of the Hanseatic city. It combines the classic proportions of the original in the premium small car segment with the forward-looking drive technology of its 135 kW/ 184 hp electric motor. For passengers and luggage, it offers exactly the same space as the conventionally powered

MINI 3-door. But it transports both entirely without local emissions. In Hamburg, drivers of a MINI Cooper SE can also rely on an almost seamless energy supply. Around 1,100 public charging stations are installed in the city. This means that there is one charging station for every 1,600 inhabitants. By way of comparison, in Berlin, where the laws promoting electromobility are made, the ratio is 1 in 3,600.

Soon, new DC fast-charging stations will be available in the Hamburg metropolitan area in addition to the usual AC charging stations. There, the MINI Cooper SE will be able to feed electricity into its high-voltage storage unit with a charging power of up to 50 kW. 35 minutes are then enough to charge a fully discharged battery to 80 percent of its total capacity.

But even today, a free power connection can usually be found in the city center.
The charging break is a welcome opportunity for a walk through the city center and thus also into the commercial heart of Hamburg. Not far from the City Hall, the Chamber
of Commerce and the Stock Exchange are impressive witnesses to a city in which trade and money have always played a major role. Even though trade has shaped the fortunes of this city for centuries, the freedom of the individual citizen was even more important. Free from kings, imperial chancellors and church princes. Free from state mergers and prime ministers.

Along with freedom comes liberality. Whether lifelong punk or hip advertiser – in Hamburg, everyone is allowed to be who they are. What some foreigners perceive
as cool arrogance, Hamburgers call attitude. Kiss-kiss and gold chains are out of place here. More important than the effect is the profit for the Hanseatic. No other German city has more millionaires per square meter, and nowhere are there more foundations.

With refreshed energy reserves in the gross 32.6 kWh high- voltage battery, the journey continues to Hamburg‘s second cityscape-defining body of water. The Alster is a popular sailing area, and there is plenty of room to stroll along its edges.

The magnificent view of the water is available to everyone. Some particularly lucky people enjoy it from the window of one of the numerous feudal villas near the shore. The luxury hotels on the Alster also radiate a certain generosity. Be it the “Atlantic“, where rock star Udo Lindenberg has been a permanent guest since 1995, the “Vier Jahreszeiten“ with its unobtrusive elegance, or the new “Fontenay“ with its large rooftop pool.

On the way back to the Elbe, the MINI Cooper SE can demonstrate its sporty temperament. It sprints from a standstill to 60 km/h in just 3.9 seconds. Through the university district, past the trade fair grounds and along the Heiligengeistfeld, the first purely electric MINI takes every curve with the agility typical of the brand. Its low center of gravity – the result of the high-voltage battery located in the bottom of the vehicle – further optimizes its solid cornering. On the way, we recommend a brief stop on the Reeperbahn, the mile that is no longer so sinful in pandemic times. At the confluence with the Große Freiheit and within sight of the famous Davidwache is Beatles Square. The “Fab Four“ greet you there as a steel band silhouette on a circular area, 29 meters in diameter with black flooring that visually resembles a vinyl record.

Back at the harbor, the first thing that catches the eye is the Old Elbe Tunnel, which was considered a world sensation when it was built in 1911. The tunnel is 426 meters long, tiled throughout, and served as the dockworkers‘ morning route to work. The domed building at the Landungsbrücken was modeled on the Pantheon in Rome. Until a few years ago, it was accessible by car, but today it is reserved for cyclists and pedestrians – and still worth seeing.

The route now continues westward along the Elbe toward Blankenese – past the former fish auction hall, another traditional red brick building, and the fish market, which is currently missed by many Hamburgers and out-of-towners because it is considered the ritual end of a pub or party tour on an early Sunday morning. Shortly afterwards, the MINI Cooper SE is already rolling along the Elbchaussee, still a boulevard with impressive villas and huge gardens. An odd house number is important – that‘s the Elbe side. After a few kilometers, Övelgönne is reached with its picturesque rows of houses and the old captain‘s and pilot‘s houses. Rental and purchase prices for real estate here are now reaching dizzying heights. Free of charge, on the other hand, is the Elbe beach with its finest sand and view of the ships in the harbor.

From there, you pass the Teufelsbrück pier on the left and Jenischpark on the right. There you will also find the fine, small Hotel “Louis C. Jacob“ with its Linden Terrace, which the Impressionist Max Liebermann captured in a picture. In the following section of the Elbchaussee, the houses once again become statelier and more magnificent, before the street narrows towards the end and leads to the Blankeneser Treppenviertel. The former fishing village was once Danish, Austrian and Prussian.

The tranquil gem is a contrast to the hustle and bustle of the big city, and the Süllberg with its small streets is the hilliest terrain far and wide. There are 5,000 steps in the staircase district, and the two-stage recuperation of the MINI Cooper SE can be tested excellently on the surrounding roads during the constant ups and downs. Every time the car descends a hill, the engine takes over the function of a generator, feeding

the energy recovered in overrun mode into the high-voltage storage system. At the same time, the vehicle is braked. The driver can activate particularly intensive recuperation with the toggle switch located to the left of the start-stop unit. This increases efficiency and also creates the characteristic one-pedal feeling. In normal driving situations,

the MINI Cooper SE can then be sufficiently decelerated even without using the braking system.

However, the “mountain stages“ on the banks of the Elbe are not all that long. The longest climb leads up the Waseberg, which is a regular highlight of cycling races through Hamburg but measures just 600 meters. Professional cyclists can only smile mildly, especially when they learn that the people of Hamburg refer to this sectio of the route with Hanseatic irony as the “Elb d‘Huez“.