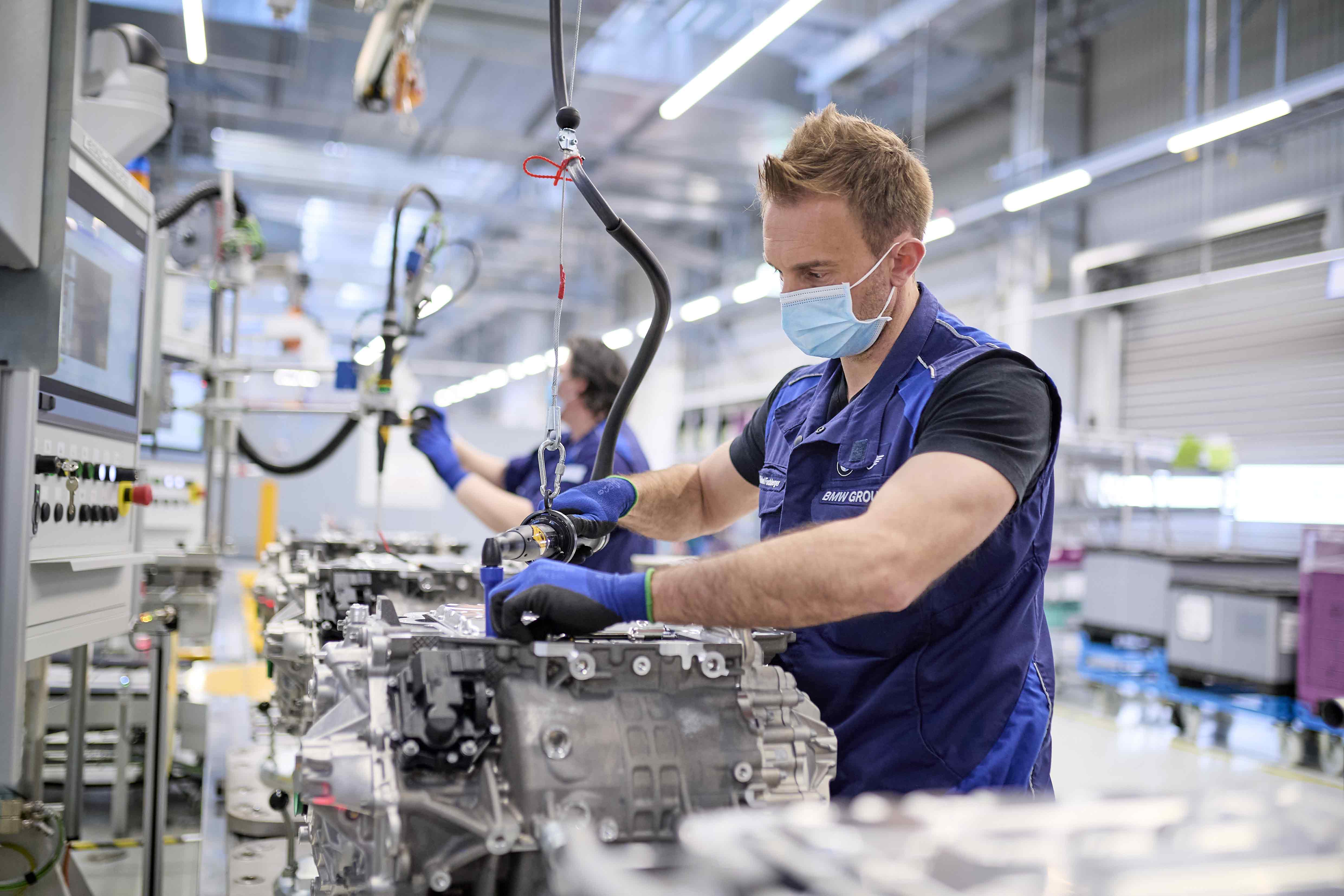 Production of fifth-generation high-voltage batteries and bat- tery modules for use in the BMW iX* and BMW i4 is now underway at the Compe- tence Centre for E-Drive Production in Dingolfing. At the same time, the company is also increasing production capacity for its fifth-generation electric motor, which has been built in Dingolfing for the BMW iX3* since 2020 and will also power the BMW iX* and BMW i4. “We expect at least 50 percent of the vehicles we deliver to our customers worldwide to be electrified by 2030. To achieve this, we are relying on our extensive in-house drive train expertise: We are increasing capacity at exist- ing drive train production locations – like here in Dingolfing – and developing capa- bilities at others – like recently in Regensburg and Leipzig,” explained Dr Michael Nikolaides, Senior Vice President, Production Engines and E-Drives, BMW Group.

The BMW Group is investing more than 500 million euros in expanding production capacity for e-drives at its Dingolfing location alone between 2020 and 2022. From 2022, it will produce e-drives for more than half a million electrified vehicles. The BMW Group will invest a total of around 790 million euros in expanding capacity for electric powertrain components at its Dingolfing, Leipzig, Regensburg and Steyr lo- cations between 2020 and 2022.

Standard production of the BMW iX* will soon get underway at BMW Group Plant Dingolfing, followed by production of the BMW i4 at Plant Munich in the autumn. The highly integrated e-drives and high-voltage batteries for these vehicles will all be manufactured at the Competence Centre for E-Drive Production in Dingolfing. The BMW Group already began producing battery components at Plants Regens- burg and Leipzig in April and May 2021. In line with growing demand for e-drives, BMW Group Plants Landshut and Steyr are also stepping up production of e-drive housings.

The output and energy content of drive units and high-voltage batteries with fifth- generation BMW eDrive technology can be flexibly scaled. This means they can be optimally adjusted to suit different model variants.

Each vehicle uses up to two highly integrated e-drives, which combine the electric motor, power electronics and transmission in a single housing. Based on the de- sign principle of a current-excited rotor, the fifth-generation e-drive does not re- quire any materials classified as rare-earth metals.

BMW eDrive technology also comprises a high-voltage battery with state-of-the-art battery cell technology. The BMW Group agreed with its suppliers that they will only use renewable green power for producing fifth-generation battery cells. The entire high-voltage battery boasts outstanding qualities in the areas of perfor- mance, charging and discharging characteristics, durability and safety. The techni- cally standardised production process for battery modules has been further devel- oped in such a way that different module variants can be produced on the same production line – in line with the growing range of electrified vehicle models and performance levels. The production systems are highly flexible and scalable. Bat- tery modules are produced from supplied prismatic battery cells at the respective BMW Group production location. A modular system developed in-house allows model-specific high-voltage batteries to be manufactured from these modules in a flexible arrangement.

The company has outstanding expertise and experience, both in the field of battery cell technology and in production of model-specific high-voltage batteries. The BMW Group conducts basic research in the fields of cell chemistry and cell design at its own Battery Cell Competence Centre. The BMW Group also produces bat- tery cell prototypes itself. These battery cell prototypes are used in tests to validate the development maturity of battery cells and to demonstrate the effectiveness of the production processes. In addition, the prototype production of the battery cells serves the identification of process potentials as well as the optimization of the pro- duction processes. In this way, the BMW Group gains a thorough understanding of the entire battery cell value chain and the decisive competitive advantages its chemical and technical properties offer. This enables battery cells to be manufac- tured to precise specifications that are geared towards each vehicle’s individual re- quirements.

Following extensive expansion, the Competence Centre for E-Drive Production now provides a usable area of 125,000 sq. m. This is where the company manufac- tures electric motors and the components needed for them, as well as high-voltage batteries and battery modules. A paint coating is also applied to the battery cells at this location. The coating increases mechanical robustness and thermal conductiv- ity, thereby improving insulation and cooling of the even more powerful fifth-gener- ation battery cells.

e-drive used for the first time in the BMW iX3*. Production of the even more pow- erful high-voltage batteries for the BMW iX* and BMW i4 is now getting underway. E-drives for future models can also be produced on the flexible production lines.

With the BMW Group systematically pursuing progress in electromobility, the de- mands on employees and their areas of responsibility are also constantly evolving. “We are growing our staff for e-drive production almost exclusively through person- nel restructuring. We are actively shaping the transformation process and leverag- ing our employees’ skills so we can develop long-term sustainable jobs,” explains Nikolaides.

Production employees receive further training at the in-house learning centre, which uses innovative vocational training and further education methods to provide employees with intensive preparation for their new tasks. Employees’ knowledge and skills are being expanded specifically to include new electromobility technolo- gies, with a training concept that is constantly updated. The training sessions are held in the classroom, at practice workstations and directly on the production lines. Digital methods and augmented reality play a bigger role here than ever before. Thanks to these methods, the training courses were also able to continue safely during the coronavirus pandemic, in compliance with health and safety measures. “The learning centre takes a holistic approach that supports employees throughout their professional development and further education, from their first day in produc- tion,” reports Dr Sven Jochmann, head of Production E-Drives Dingolfing, Lands- hut, Regensburg, Leipzig. “As well as trainers and managers, new colleagues are also supported by trained mentors who help them quickly find their way around their new working environment,” adds Jochmann.

Transformation of the Dingolfing location

The Dingolfing location is a prime example of the successful transformation of the BMW Group plants towards e-mobility and digitalisation. E-drive production, in- cluding electric motors and high-voltage batteries, is located in an existing, roughly 50-year-old building at the site, rather than using new space. The infrastructure was adapted to the new requirements and expanded accordingly. A modern staff restaurant seats 300 and there is also a new parking deck with space for 800 vehi- cles. The structural measures are rounded out by a 25,000 sq. m. logistics hall, new office spaces and social rooms close to the production area, as well as an ad- ditional plant gate in the south for improved logistics flows.

On the issue of sustainability, the BMW Group takes a holistic approach to reducing CO2 emissions and minimising resource consumption that covers the entire value chain, including in-house production, the supply chain and use phase. In Dingolfing, as at all BMW Group locations, production uses only green power. In addition, all BMW Group locations have been net carbon neutral since this year, through corre- sponding offsets and certificates. The company is also using many other levers: from building technology to energy-efficient installations to increased use of renew- able energies. Electric trucks will be used for intra-company goods transport at the Competence Centre for E-Drive Production from the autumn.

2030: At least 50 percent of global BMW Group sales will be fully electric

The BMW Group continues its massive electromobility ramp-up: The company will offer five fully-electric models by the end of this year: the BMW i3*, the MINI Cooper SE* and the BMW iX3*, as well as the two main innovation flagships, the BMW iX* and BMW i4.

Global e-drive production network with a focus in Germany

The high-voltage batteries and battery components needed for all BMW and MINI electrified vehicles come from the company’s own battery factories in Dingolfing, Leipzig and Regensburg in Germany, as well as from Spartanburg (USA) and Shen- yang (China). The BMW Group has also localised production of high-voltage batter- ies in Thailand, at its Rayong plant, and is working with the Dräxlmaier Group for this. Munich is home to the e-drive pilot plant and the Battery Cell Competence Centre, where the BMW Group is conducting a full analysis of battery cell value creation processes and advancing technology for its production processes.

The company produces electric motors at the Competence Centre for E-Drive Production in Dingolfing and at BMW Group Plant Landshut. BMW Group Plant Steyr builds the housing for the highly integrated fifth-generation e-drive.