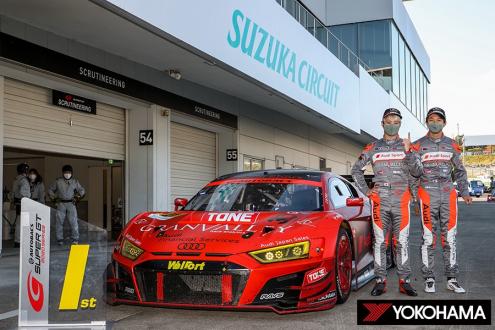 The Yokohama Rubber Co., Ltd., is pleased to announce yet another victory by a racing car equipped with its ADVAN racing tires. This victory came in the GT300 class race in Round 6 of the 2020 AUTOBACS SUPER GT series, held on October 24-25 at the Suzuka Circuit in Mie Prefecture. The AUTOBACS SUPER GT series is Japan’s ultimate touring car race. Cars running on YOKOHAMA tires have now finished first in half of this year’s SUPER GT races, with victories in Rounds 2, 5 and 6.

The victorious machine was the Hitotsuyama Audi R8 LMS of Audi Team Hitotsuyama (drivers: Shintaro Kawabata and Tsubasa Kondo). The Hitotsuyama Audi R8 LMS started the race in the No. 6 position with Kondo behind the wheel. He turned the car over to Kawabata after a pit stop on the 19th lap. A crash brought out the Safety Car to control the race on the 21st lap, but when the race resumed Kawabata pulled away from the pack and held on to the lead until receiving the checkered flag, bringing the team its first victory of the season. GOODSMILE RACING & TeamUKYO’s GOODSMILE HATSUNE MIKU AMG (drivers: Nobuteru Taniguchi and Tatsuya Kataoka) finished third for their first appearance on the podium this season.