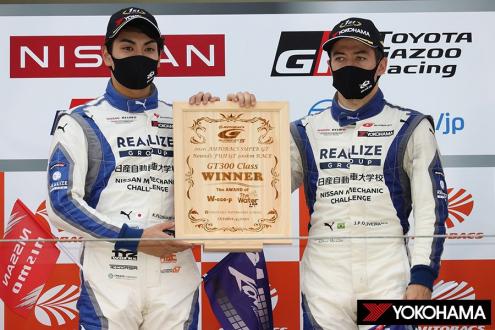 The Yokohama Rubber Co., Ltd., is pleased to announce another victory for a racing car equipped with its ADVAN racing tires. This latest victory was in the GT300 class race in Round 5 of the 2020 AUTOBACS SUPER GT series, held on October 3-4 at the Fuji Speedway in Shizuoka Prefecture. The AUTOBACS SUPER GT series is Japan’s ultimate touring car race series.

The victorious machine was KONDO RACING’s Realize Nissan Automobile Technical College GT-R (drivers: Kiyoto Fujinami, Joao Paulo de Oliveira). Starting the race in the 6th position, Realize Nissan Automobile Technical College GT-R with Fujinami at the wheel took the lead on the 15th lap. Fujinami turned the car over to Oliveira on the 29th lap, still ahead of the pack. After temporarily slipping into 2nd place, Oliveira retook the top position during lap 47 and stayed out in front for the rest of the race, getting the checkered flag with a 23-second lead over the next finisher. The victory was KONDO RACING’s first GT300 win in just its second year of competition in the class, having first raced in the GT300 class in 2019.

The technology strategy outlined in the company’s current medium-term management plan, the Grand Design 2020 (GD2020), positions participation in motor sports activities as crucial to Yokohama Rubber’s effort to be at the vanguard of the development of new tire technologies. Yokohama Rubber is therefore participating in a wide variety of events in Japan and around the globe, from top-category races to grassroots races. In this year’s SUPER GT series, Yokohama Rubber is supplying tires to 20 machines competing in the GT300 class and three machines running in the GT500 races. Overseas, Yokohama Rubber is supporting teams active in a wide range of race categories as part of its effort to promote motor sports around the world. Yokohama Rubber will continue to be actively involved in motorsports as it continues its pursuit of the highest level tire technologies.