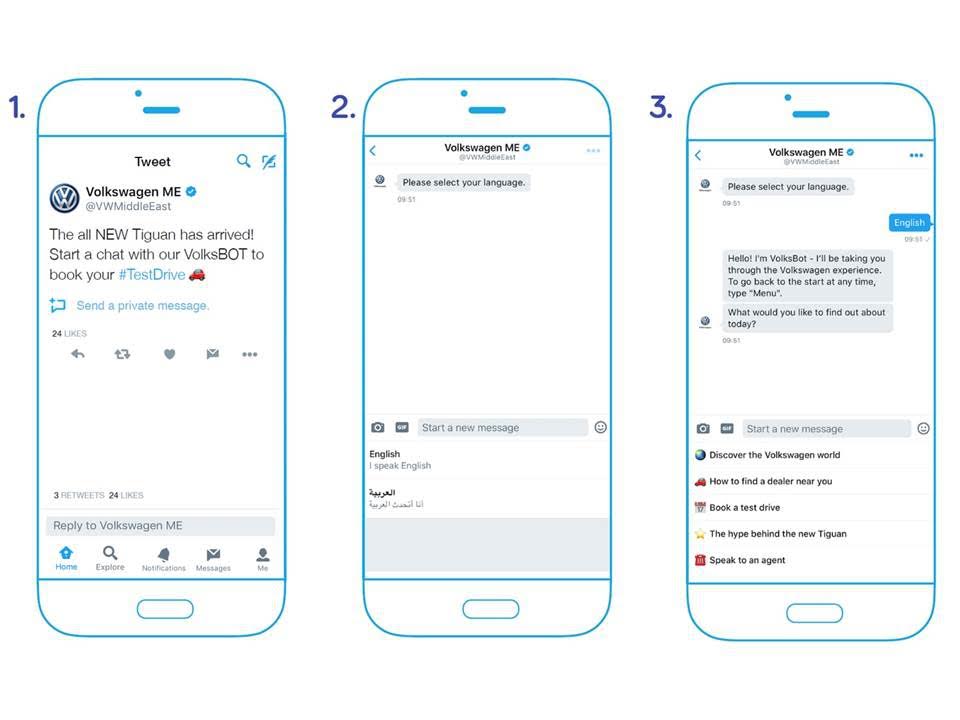 Volkswagen Middle East teamed up with Twitter and Brndstr to develop an automated bot that would respond to customers via the DM feature on Twitter. This is the first time an automotive brand has taken such an initiative in the world and used automated experience to transform customer experience

Volkswagen Middle East and Twitter have initially launched the bot as a pilot program for facilitating faster and more personalized responses to customers. This is the first such automated experience that has been developed for the automotive industry on Twitter’s new Direct Message platform. The DM platform was launched last year to allow people to send messages instead of tweeting publicly with just the click of a button.

Volkswagen Middle East and Twitter worked with the software firm, Brndstr, to develop a program hosted on the Volkswagen Middle East Twitter channel @VWMiddleEast. The bot service, has been aptly called “Volksbot” and has the ability to respond automatically either in Arabic or in English in rich media format through images and videos. Twitter users can ask a wide range of questions including details of the Volkswagen retail network and even book a test drive through the Twitter channel’s direct messaging service. They can watch video responses directly within the discussion feed.

Speaking about the launch of the bot, Andrew Savvas, Brand Director Volkswagen Middle East said that the company’s focus in 2017 is to digitalize its business with world-class services for its customers. Last year, the Volkswagen Middle East Twitter platform had crossed over 11 million impressions. This confirmed that Volkswagen customers use digital channels to search for new information. The issue was how to best meet the needs of customers on their preferred channel. I tis vital to innovate and remain up-to-date in an industry that is changing rapidly to meet and exceed customer’s needs.

Benjamin Ampen, Head of Revenue, Middle East and North Africa, Twitter said that twitter is the best place for companies to provide care to their customers. Twitter has the advantages of being live, public, and conversational and these elements provide brands with the ideal climate to deliver the best customer car. They can use Twitter to respond to customers publicly, via a Tweet, or privately, via Direct Message. According to Ampen, the launch of Volkswagen’s bot aligns with Twitter’s efforts to build a canvas for better customer experiences with partners that aim to lead the industry through digitalized revolutionary changes.

Simon Hudson, CEO, Brndstr said that the company was honored to have been selected by Twitter as one of the world’s first developer partners to build on the new Twitter DM API. The firm partnered with Memac Ogilvy and Volkswagen Middle East to make the first ever test drive booking BOT to live inside Twitter. Now, customers in the UAE can book their next test drive with Volkswagen Middle East via their very own Volkster BOT.

He added, “As the regions first dedicated BOT studio we look forward to developing new digital assistants for brands on Twitter”

The Volksbot is available in English and Arabic, and can respond to customers with video, images or text content to cues that the customer provides. It can be used to book a test drive, learn more about the newest Volkswagen model or learn quirky facts about the brand. Volkswagen Middle East will first roll out the software in the UAE, before launching it in all the GCC and Levant markets for the Volkswagen Middle East retail network.