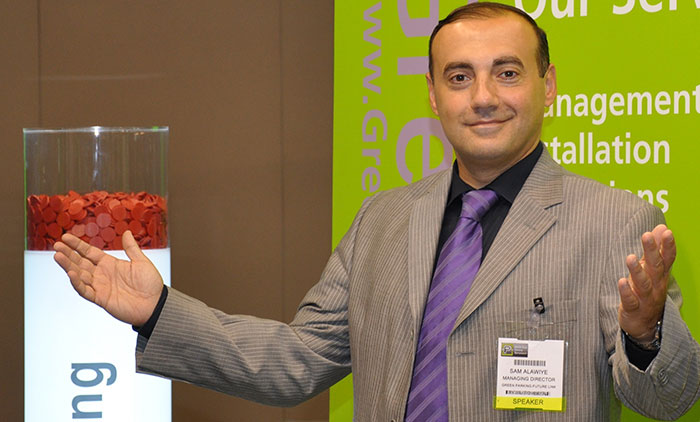 n crowded cities like Dubai and Abu Dhabi, parking is a major hassle. Circling a commercial parking lot many times over searching for an empty space definitely has an impact on the environment as it uses up fuel and results in more carbondioxide emissions. Another parking fail from the environmental perspective is the need for paper parking tickets.

GreenParking, is one of the pioneers when it comes to technology to replace paper parking tickets with an array of options including ParkChips, Long-Range Cards and Contactless Entry Cards. As an outcome of the switch from paper tickets to these options, the company reports that as many as 3,670 trees have been saved, which translates into 30.5 million sheets of paper, just by switching from standard paper tickets to smart technology.

This “paperless” technology will be one of the key components of the UAE government’s sustainability drive. Earlier in 2015, forty one Federal entities made the switch for 96.3% of the 337 most important daily transactions from document based services to m-Services, which is definitely a key milestone since the launch of the Smart government initiative in May 2013. These savings are seen when it comes to parking as well, not just in financial terms but also when it comes to the impact on the environment, and are easily attainable according to Sam Alawiye, Managing Director, GreenParking. According to him, 30 million sheets of paper is definitely not a small amount as it weighs around 145 tons, or nearly two thirds of the Statue of Liberty. This has been achieved by using this technology in only 100 locations in the UAE and the impact would be even greater if it is used in more locations.

Green-Parking uses a Read-Write Technology which can be utilized even in the case of network failure, unlike Barcode or other systems which are based on the use of Read-Only Concept. The technologically advanced paperless ParkChip technology not only offers immense savings over the long term but is also more reliable as there is minimal wear and tear. Paper ticket terminals have numerous fine mechanical components which are highly vulnerable to breakdown whereas Green-Parking’s contactless technology relies only on gravity.

GreenParking’s products are not limited to paperless tickets. The company is also collaborating with the Dubai Electric and Water Authority (DEWA) on installing and operating Electric Vehicle Chargers (EVC’s) at parking locations across the UAE, which are operated by GreenParking. In an effort to reduce the country’s carbon footprint, the UAE is aggressively promoting the use of eco-friendly Electric Vehicles. The Emirates Authority for Standardization and Metrology is working on developing norms and regulations for the operation of electric vehicles in addition to transforming the attitudes of the general public with regard to vehicles that use clean energy.

Alawiye said that he expect s to see increasing use of electric vehicles on UAE roads as part of Dubai’s Smart City initiative, and said his company will be heavily promoting the use of smart technologies and electric vehicles at Gulf Traffic. He felt that setting up more EV charging stations will inspire more motorists to switch to the use of environment-friendly vehicles.

GreenParking will be closely involved with the installation of EV Charging Stations, including the fast charging types, at the DEWA headquarters and other locations spread across the UAE.. Eventually, there will be over 200 such stations at petrol stations, malls and private residences by the end of 2016.

Gulf Traffic 2015 is shaping up to be a major event, with 95 per cent of floor space sold out to exhibitors one month before the event and the free to attend conferences increasing from three to five. The event will serve as a platform for industry leaders from across the globe to network and discuss the latest developments and technologies with regard to transport and traffic. GreenParking is the official Green Sponsor for Gulf Traffic 2015 which is scheduled to be held from 7-9 December at the Dubai World Trade Centre.