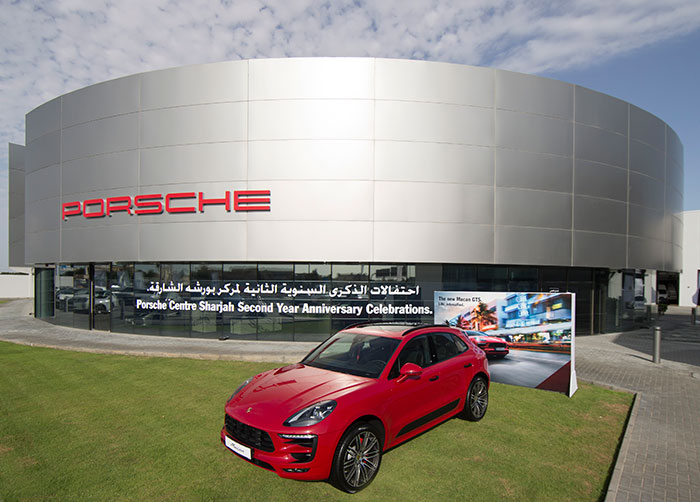 Porsche Centre Sharjah marked its second anniversary by showcasing the Macan GTS, the German brand’s powerful addition to its range of sporty SUVs. This highlighted the Macan’s positioning as a sports car in the compact SUV segment.

During the celebration, the Macan GTS bwhich has an outstanding output of 360 hp and 500 Nm of torque took centerstage. The model is fitted with a three-liter V6 bi-turbo engine which is paired with the Porsche Doppelkupplung (PDK) and Porsche Traction Management (PTM). The PTM flexibly distributes power between the front and rear axles to provide a smooth ride to motorists. The Macan GTS goes from zero to 100 km/h in just 5.0 seconds with the optional Sport Chrono package, and has an impressive top speed of 256 km/h.

Like all Porsche models that have the GTS badge, the Macan GTS too takes its inspiration from the world of motorsports. The elements that have been borrowed from the racetrack include the lower PASM chassis, 20-inch RS Spyder design wheels and the sports exhaust system. The sporty Macan will be the first Porsche SUV to offer customers the new Porsche Communication Management (PCM) system and drivers can use an integrated, multi-touch monitor to access online, real-time navigation and traffic information.

He added, “In conjunction with celebrating another successful year for Porsche Centre Sharjah, the display of the Macan GTS mirrors our own ongoing efforts in bringing the very best to our customers in Sharjah and the Northern Emirates.”

Other highlights of the anniversary celebration included Porsche driving experiences, comprising included road tours and dynamic handling courses. Special service benefits such as health checks, and warranty extensions were also offered. The Porsche Centre Sharjah is spread over 15,800 sq ft, and was officially opened to the public in 2014. It consists of a showroom displaying the full range of Porsche models and a service facility.