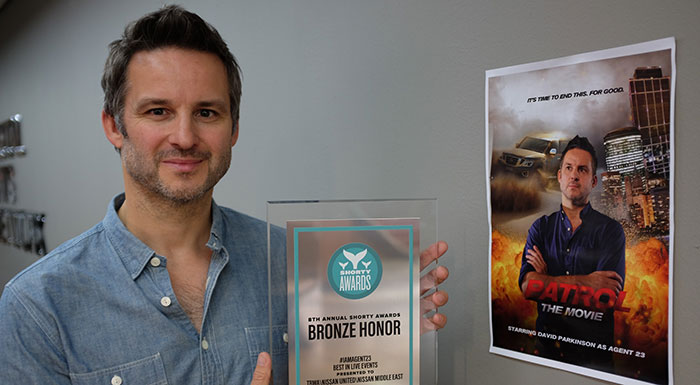 Nissan recently won the prestigious Bronze Shorty Award for the short documentary it unveiled to showcase the Nissan Patrol at the Dubai International Motor Show in November, 2015. The Shorty awards, popularly known as “The Shortys” are the most prestigious awards in the world of social media and recognize the most creative activations that are deployed on Twitter, Facebook, Instagram, Snapchat and other social platforms. By getting the Bronze Shorty for “Patrol: The Movie”, Nissan has proved that it has mastered the art of digital marketing.

The jury members for the Shorty award lauded the movie for the innovative and interactive manner in which visitors to the show were asked to participate in the filming of many short scenes which were spliced and edited to create a movie “trailer”. The trailer had two secret agents, one driving a the All New Nissan Patrol and another driving the All New Nissan Maxima participating in an exciting desert car chase sequence.

According to David Parkinson, Nissan Head Digital Africa, Middle East and India, using the motor show as a platform to get customers to act in the film and draw them in to experience the excitement of Nissan was a brilliant touch. This kind of activation is normally carried out only in Hollywood studios or major theme parks and gave them a chance to get up close and personal with the Nissan Patrol.

Well known film directors were on hand at the show to guide the newbie actors, and they used equipment that is normally used for producing high end Hollywood movies. The footage thus obtained was then quickly edited into professional quality trailers that were shared on Nissan’s social media platforms, where they were viewed and shared by a global audience.

To cap the film star experience, the novice actors walked straight out of the filming facility onto a red carpet, for a face-to-face encounter with full-sized posters for ‘Nissan Patrol: The Movie”, with the posters having the person’s photo featured alongside their name as the starring lead actor or actress.

The activation definitely created an impact on social media receiving as many as 450,000 Instagram interactions, 3 million video views and achieving a reach of 8.4 million on Facebook and 4.4 million on Twitter. It also received top Share of Voice at the Dubai International Motor Show 2015.

Samir Cherfan, Nissan Middle East’s Managing Director said that the activation had a real impact as it gave Nissan fans a chance to get an idea of today’s action movies are madewhile proving to be a lot of fun. It was also extremely effective as a marketing tool, aligning well with social media’s immediacy and global reach.

Apart from making social media stars of inpiduals who became the ‘Agent 23’ driving the Patrol in the movie, the short film proved to be a real showcase for the Nissan Patrol. The Patrol is one of the bestselling SUVs in the region and this activation touched a chord with by giving Nissan extra traction in the digital space.