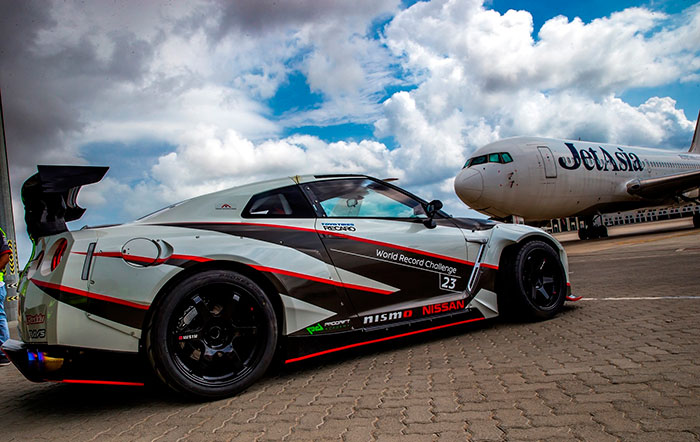 Drifting is a really spectacular sport and the Nissan GT-R has just created history by breaking the Guinness World Record for the fastest drift in the world. This was done at a speed of 304.96 km/hr and 30 degrees angle in a specially customized and tuned MY16 Nissan GT-R. The record was created by Masato Kawabata, who is the title holder for the Japanese drift series and he broke the record that was established by Jakub Przygoński of Poland. The Guinness world record was broken during a special event that was held at Fujairah International Airport, UAE.

Nissan Motors developed the record-breaking Nissan GT-R with support and coordination from Nismo specialists. The vehicle was tuned to 1380 HP to give it the power needed to break the record and was specially customized to direct all power to the rear wheels. The GT-R was prepared by GReddy Trust and underwent extensive testing with Kawabata at the controls at Japan’s Fuji Speedway facility. The car was tunes in order to optimize its flexibility without affecting its stability or handling in any way.

Speaking about the record, Samir Cherfan, Managing Director of Nissan Middle East said that Nissan has made international history for the fifth time in the Middle East by breaking the Guinness World records title. The record proved that the Nissan GT-R is indeed one of the most iconic supercars in the world by showcasing the full extent of its capabilities and by beating the best drift cars. Setting this incredibly tough world record is a clear example of the excitement that Nissan has brought to the Middle East with the Nismo.

Fujairah International Airport was chosen for the event on the basis of its 3km long airstrip which was considered long enough to support the challenge. It was the target of the Nissan team right from the beginning to perform the feat at a speed exceeding 300km/h and Kawabata who was the frontrunner in the Japanese drifting series for Team Tokyo, was specially selected for the event from a list of highly specialized competition drivers.

His Excellency Mohammed Al Salami, Chairman of Fujairah International Airport said that they were very happy to be able to host an event in which the UAE added another Guinness world record to its credit, all while maintaining the security that is needed at an airport facility.

Cherfan also went on to thank the team at Fujairah International Airport for extending their support, especially since it was a perfect venue for the attempt to break the world record. Nissan had to set up a workshop in one of the airport’s hangars and managed to get everything accomplished in just five days including the security checks for all the equipment like the spare parts, tires and the specially tuned MY16 Nissan GT-R.