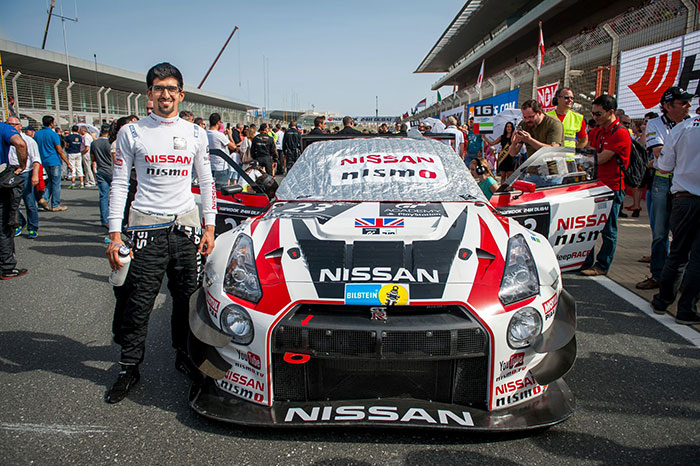 In a move that confirms that real life gaming skills can prove to be the making of a professional race driver, Ahmed Khaled’s career as a race driver has flourished since he won the GT Academy in 2014. He began his career as a professional driver by participating in the Hankook 24H Dubai at the Dubai Autodrome in 2015. Now, life is coming full circle for Khaled as he returns to the race this year with sponsorship from Nissan. Nissan will be backing the GT Academy winner for 2016 Hankook 24 H Dubai. The endurance race will be held from 14 to 16 January this year at the Dubai Autodrome and will constitute the first leg of the Hankook 24 H series.

Speaking about Nissan’s backing for Khaled, Samir Cherfan, Nissan Middle East’s Managing Director said that Khaled’s success on the racetrack proved that gaming skills can be a good starting point for a successful race. Nissan’s GT Academy helped Khaled to realize his dreams.

He added, “With the backing of Nissan, Ahmed Khaled has been able to turn dreams into reality and his story will inspire generations to come. We are all extremely proud of what he and others like him have achieved and to be competing once again at this prestigious event is an honour.

In order to become successful, it is important for a racer to participate in carefully planned development programs. Support from Nissan will help Khaled to utilize every chance he gets to develop his career on the track.

After he won the Middle East round of 2014’s GT Academy, Khaled was one of the members of the Nissan racing team that participated in the Altima 24 Hours event, as well as in a number of Drifting contests held across the Middle East. Nissan will be continuing its support for the young driver by sponsoring him in Molitor Racing’s GT-R GT3 for what is arguably the most well known endurance race in the Middle East.

Khaled said that the race will be even more significant for him as it was the event in which he began his racing career a year ago. He is eagerly looking forward to improving on his performance in the race last year and considers it to be highly prestigious to compete at the top level in the GT-R GT3.

The 24H Dubai event is open to both amateur and professional racing teams and is a key event on the global endurance racing calendar for motorsport fans. It is the ultimate test for drivers, their vehicles and their team members as it is an unbroken 24-hour race.

Commenting on the race, Cherfan said that the company’s Nismo GT-R GT3 has proved to be more than equal to the task in many of the world’s toughest competitions. The 2016 Hankook 24H Dubai is a tough race that puts drivers and their teams under enormous pressure, but he expressed his hope that Khaled would keep the flag of the GT Academy high and would fare well in the race.