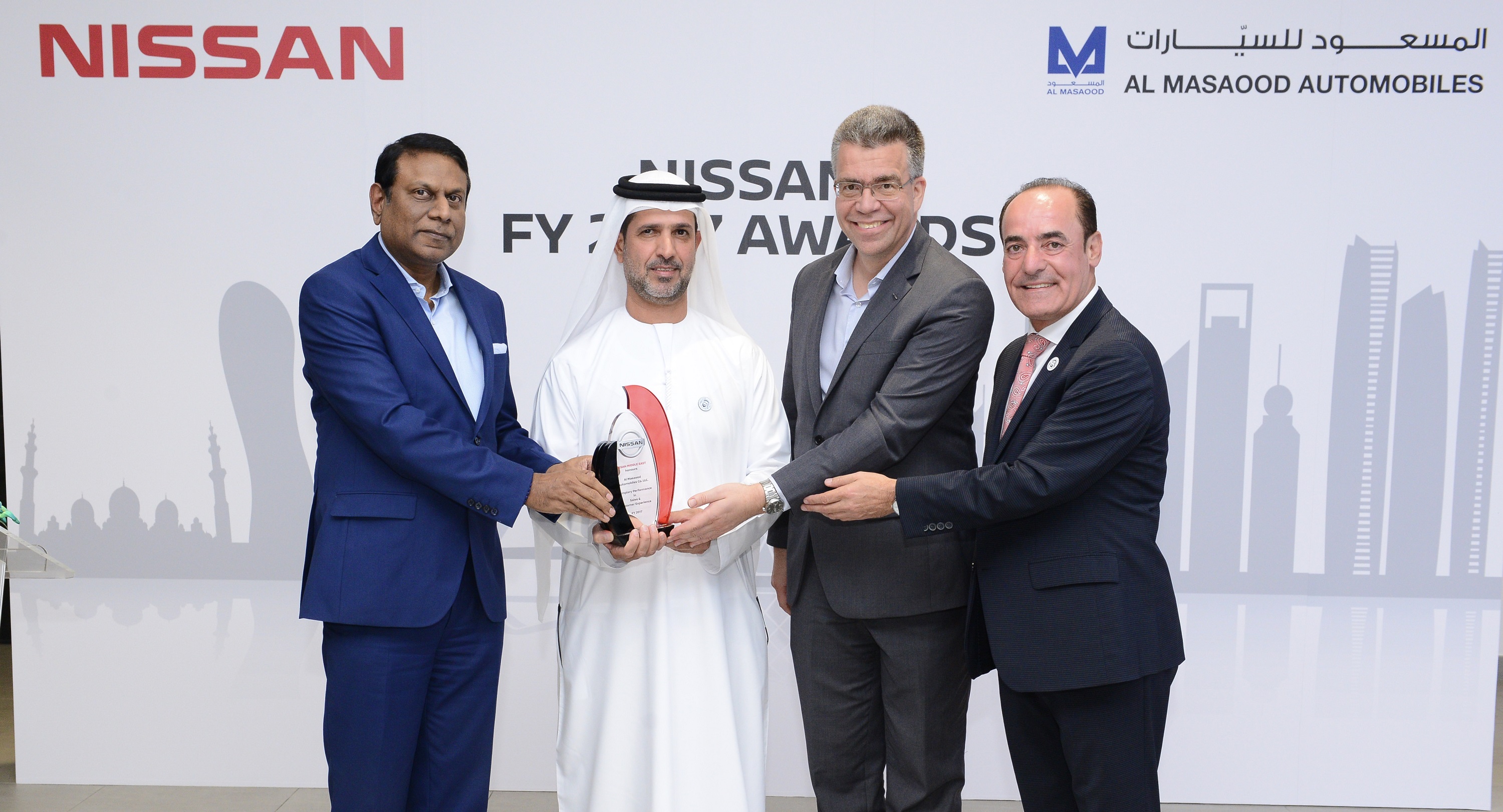 Nissan Middle East awarded Al Masaood Automobiles for ‘Exemplary performance in Sales and Customer Experience in FY17’. Al Masaood which is Nissan’s authorized distributor for Abu Dhabi, Al Ain and the Western Region won the award for increasing its market share in 2017 and for exhibiting impressive customer service standards in the automobile industry.

Nissan had instituted the award with the purpose of recognizing the achievements of its distributors, recognizing sales efforts, outstanding customer and aftersales service and their commitment to achieving the highest ranking in market surveys.

Every year, as part of continued efforts to maintain its leadership in the market, Nissan conducts an annual Competitive Customer Satisfaction Survey to benchmark sales & service processes against competitors in the main markets. Distributors are ranked on the basis of several parameters including showroom experience, sales staff competency, delivery process, delivery timing and after post delivery services. Al Masaood Automobiles was ranked #1 in the FY17 survey in both sales & service.

In the period from 1984 to 2018, Al Masaood Automobiles has sold hundreds of thousands of Nissans and recently became the first distributor in the Gulf region to successfully roll out Nissan’s new retail concept at the Khalidiya showroom in Abu Dhabi.

During the award ceremony, Al Masaood Automobiles was also commended for its experienced and successful leadership that modernized and streamlined operating structures with a view to long-term growth and profitability, thus ultimately increasing market share.

Commending the group, Kalyana Sivagnaman, President of Nissan Middle East and Regional Vice-President Africa, Middle East & India Region, said: “For over 30 years, Al Masaood Automobiles has supported Nissan in achieving remarkable sales in the UAE. The group’s dedication and leadership has contributed largely to Nissan’s visibility in the market. The seamless rollout of Nissan’s new retail concept by Al Masaood is a key testament to their commitment towards providing customers a global brand experience. We are very pleased to be awarding Al Masaood Automobiles this title and would like to thank them for their continued excellence and successful partnership.”

H.E. Masaood Ahmed Al Masaood, Chairman of Al Masaood Group responded by saying that working with an innovative brand like Nissan has helped to make Al Masaood the front runners in the industry and it was an honor to receive the award from Nissan. According to him, at Al Masaood, the focus is on retaining customer satisfaction and offering a seamless purchase experience with its ‘customer first’ ideology.

Irfan Tansel, Chief Executive Officer of Al Masaood Automobiles added that the company has exhibited a proven ability to thrive, both in good times and in bad, and he expressed his belief that this ability evolved from the company’s respect for the UAE heritage and its vision of the future. He said that the award would inspire Al Masaood to continue to win the hearts of its customers and create advocates for Nissan in Abu Dhabi, Al Ain and the Western region.

Juergen Schmitz, Managing Director, Nissan Middle East, also commented on the award saying “We are delighted to be here today, celebrating Al Masaood Automobile’s notable achievements, who over the last 30 years have reflected upon Nissan’s vision to be the leading car brand in the world. Their efforts around enhancing customer service experience and launching the Business Development Call Centre are just a few examples among others, of Al Masaood’s continuous efforts to remain at the helm of the auto industry in the UAE.”