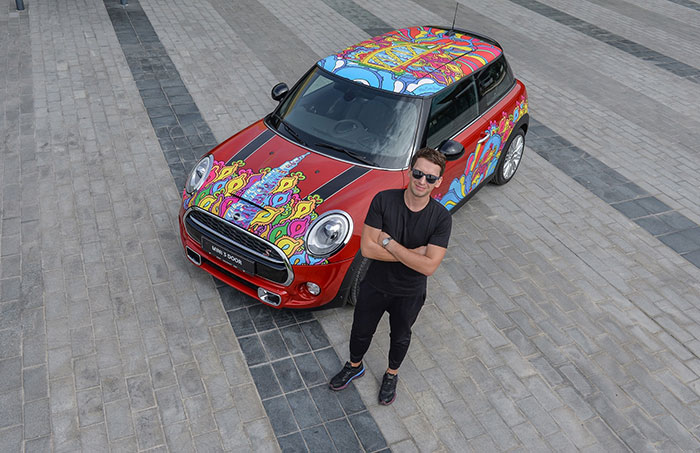 MINI is a brand that is well known for its innovative marketing campaigns and promoting creativity in film, music and art. In this vein, MINI, and its local distributor in the UAE AGMC, has collaborated with the Russian artist Max Goshko-Dankov to create exclusive artwork for a month-long exhibition that is being held at the Jumeirah Creekside Hotel

Max Goshko-Danov is a Moscow-based contemporary artist whp has made a name ofr himself with his cosmopolitan designs. He has previously worked with MINI many times, both in the Middle East and in his native Russia. To showcase his love for Dubai and the Middle East, he has created 14 pieces of art that impress viewers with their blend of local inspiration and international influences. These include a MINI 3-door Hatch that is been wrapped in a special design that Goshko-Dankov created in his signature whimsical style.

The Russian artist’s worls will take centerstage at the monthlong exhibition that will be held from 17th March to 18th April at the Jumeirah Creekside Hotel.

Max Goshko-Danov’s is being held in Dubai after achieving spectacular success in Moscow. He had earlier collaborated with MINI for a Velentine’s Day Project in the region, as part of which he created an exclusive design which was inspired by his love for both the brand and the Middle East.

Speaking about the exhibition, Guillaume Foix, Head of MINI in the Middle East said that MINI is always a brand that has been known for being a trendsetter, by inspiring others and getting inspiration from others. It is known for celebrating design, creativity and culture. The same goes for the brand in the Middle East where the team is committed to highlighting the brand’s inpiduality by fostering creative projects like Goshko-Danov’s exhibition. He believes the company’s collaboration with Max will help it to engage with the Creative Class, especially as it will be held in the middle of the city’s art season, at about the same time as events like Downtown Design Days and Art Dubai.

He concluded, “MINI is also smart and innovative, finds clever solutions and thinks outside the box. This philosophy was cleverly incorporated by Max to produce this unique moving piece of artwork.”