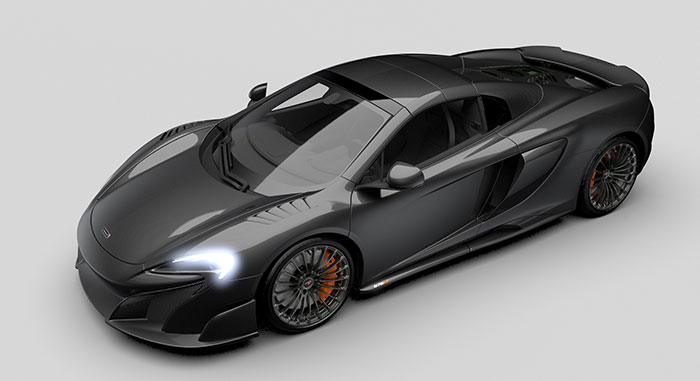 McLaren Automotive’s bespoke pision, McLaren Special Operations, created a limited edition MSO Carbon Series LT inspired by the 675LT Spider. With a limited run of just 25 units globally, the series was created due to repeated requests from customers who appreciated the visual impact of the sleek carbon fiber bodied McLaren P1 that was showcased at the recent Geneva Motor Show.

In keeping with the ‘Longtail’ ethos first seen in the McLaren F1 in the late 1990s, the MSO Carbon Series LT focused on keeping the weight low and optimizing the aerodynamic performance. The beauty of the model was enhanced by applying gloss carbon fiber to the entire body of the car. All the 25 units that are scheduled to be produced have already been sold in advance.

Just like the 675LT Spider, the limited edition MSO Carbon Series LT has a front bumper with larger splitter and end plates. These parts in addition to the front underbody, lower side intakes, lower rear body, rear fenders, diffuser, rear deck and ‘Longtail’ Airbrake are all fashioned from carbon fiber with a gloss finish. Other distinctive features include the gloss finished carbon fiber electrically retractable roof and tonneau, A-pillars, bonnet and rear deck, side blades, complete front and rear wings, and even fuel filler flap.

The model has a McLaren Track Telemetry pack, inclusive of three track cameras as a standard feature. The front wings have GT3-inspired functional louvres. The model has about 40 percent more carbon fiber parts than a standard car, and needed a considerable amount of development work from the MSO team as it is not possible to retro-fit the gloss carbon fiber body to a 675LT Spider. Thus the 25 units are being made in addition to the 500 units of the standard car that has already been sold out after it was launched on December 4, 2015.

The MSO Carbon Series LT is third model in the LT series, with the first being the 675LT Coupé, that revived the ‘Longtail’ name after almost two decades. The 675LT Coupé was all about higher power, lighter weight, streamlined aerodynamics and the limited edition model sold out even before the first deliveries were made. The open top 675LT Spider with its promise of an exhilarating, powerful ride further strengthened the McLaren badge and the ‘LT’ brand.

The MSO Carbon Series LT is powered by a thoroughly revamped 3.8-litre twin turbo V8 powertrain from the Coupé sibling, with similar performance figures of 675PS (666bhp) delivered at 7,100rpm and 700Nm (516lb ft). Over 50 percent of the components were replaced to refine the engine for better power, torque and drivability. Changes included addition of more efficient turbos, changes in design to the cylinder heads and exhaust manifolds, new camshaft and lightweight connecting rods, and better fuel pump and delivery system.