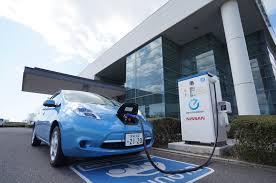 The Japanese government is planning to relax restrictions that make it difficult for gas stations to terminals for recharging electric vehicles as it wants to promote the use of vehicles using alternate fuels and revitalize the charging network for electric vehicles.

Japan has strict fire safety laws which strictly regulate where gas stations can install plug-in points on their premises. According to current laws, charging and refueling stations for electric and hydrogen fuel cell vehicles should be 10 meters away from a gas stations. In the case of small gas stations, this rule will limit the number of electric vehicles that can be accommodated for recharging.

The Ministry of Economy, Trade and Industry is now thinking of relaxing these standards so that gas stations can set up charging terminals alongside pumps, irrespective of space. Initially, this would be done on a trial basis while close tabs are kept on safety and the pilot programs are likely to be conducted in special deregulation zones.
The ministry will set up a study group comprising representatives from the oil and gas industries, and will collect field opinions from the Fire and Disaster Management Agency and retailers. The plan is to publish a course of action by May, with a view to relaxing restrictions by fiscal 2019.

Based on the same fire prevention law, gas stations are only allowed to house a few businesses like car washes on their premises. The changes are likely to allow the establishment of businesses like convenience stores, supermarkets and package delivery depots in such areas so that stations can diversify their revenue streams.
Gas stations are also legally required to have at least one employee on site at all times, even in the case of self-fueling stations. The Ministry will consider completely unmanned gas stations, in instances where the pumps are remotely monitored with information technology tools.

Fuel supply tanks at filling stations can only be installed underground, but the change in rules will lalow such tanks to be located above ground.
Currently, Japan has about 23,000 electric vehicle charging terminals in operation, and 100 hydrogen stations. The Japanese government is aiming to increase this to 320 hydrogen stations by fiscal 2025