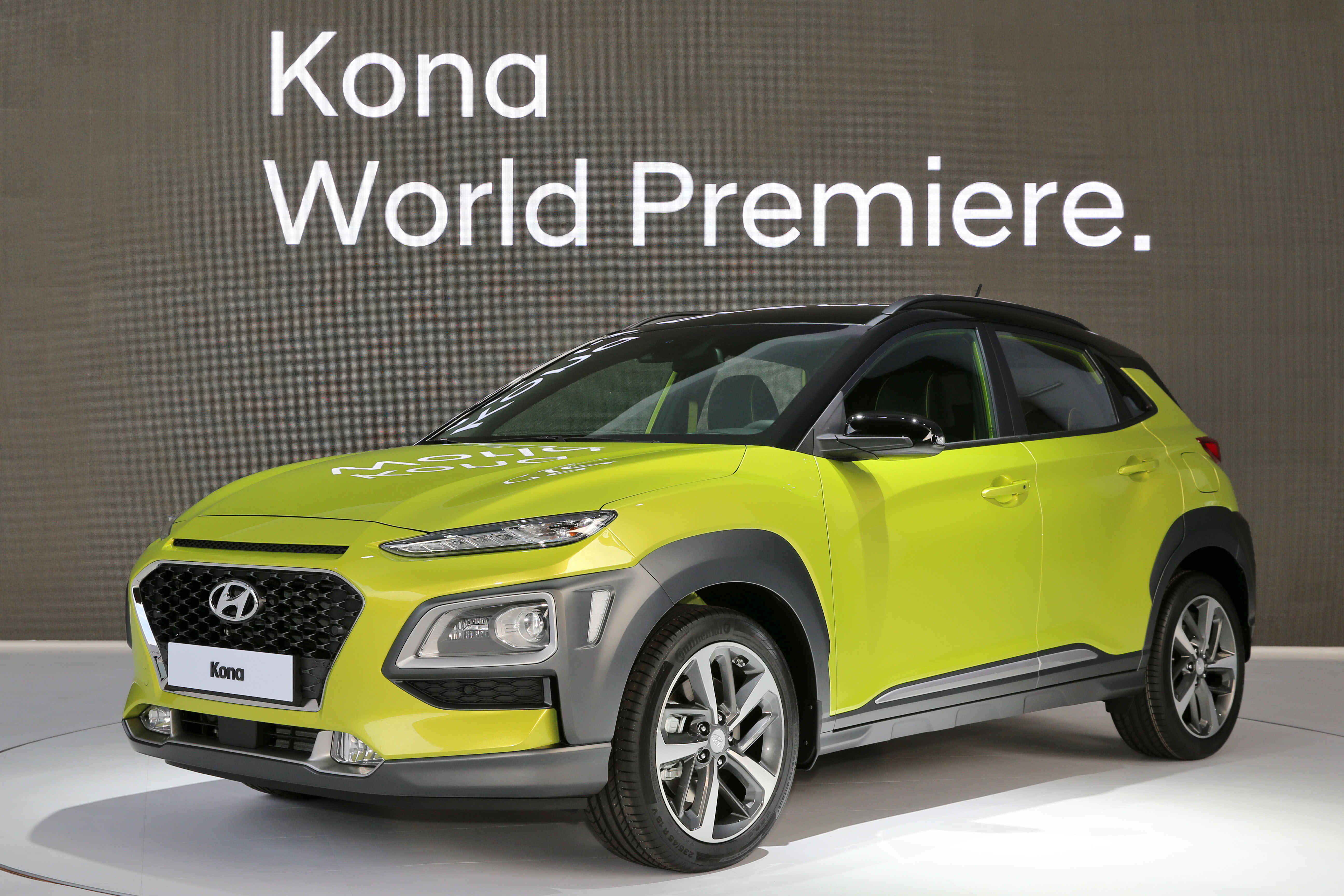 Hyundai recently launched its first compact crossover, the Kona in Seoul, South Korea. The compact crossover category is one of the most popular segments and the Kona is positioned as a competitor against the Fiat 500X, Honda HR-V and Toyota C-HR. Smaller than the Hyndai SantaFe and the Tucson, the stylish Kona rounds off Hyundai’s models in the crossover segment. The model will be available at the retail level in Korea from late June and will be launched in the United States and in Europe later this year.

Hyundai Kona’s design is more aggressive than that of its other models. The model is notable for its looks as well as its performance. According to Hyundai, the more aggressive design of the Kona signals a change in its design philosophy for other models as well which will have bolder designs in the future.

The Kona has a large, shield-like grille which is quite similar to that on the new Elantra GT and the revamped. Above the new grille, there is a wide air scoop. The rest of the exterior has a highly muscular appearance, complete with big fenders and sharp creases. Hyundai chooses to term the black cladding “armor” though it is not clear what degree of protection it provides. Customers can opt for the Kona to have a contrasting roof color.

The Kona uses LED lighting both in the front and rear. Unlike in other Hyundai models, the LED taillights are wide, slim units.

The interiors have been designed to make optimum use of space and Hyundai boasts that the Kona has the best-in-class interior space. The interiors have a simple design but are well designed and well arranged. As in the case of the Elantra GT, the infotainment screen sits above the dash like a tablet.

Customers can opt for a 5, 7, or 8-inch infotainment display, with availability of these options depending on the market. Higher trims will have Apple CarPlay, Android Auto, HD and satellite radio, a rearview camera, and in the United States, 4G telematics. Other notable features in the Kona will be wireless smartphone charging and a heads-up display, a feature that is becoming increasingly common in new models.

Many people buy a crossover because they consider them to be safer vehicles. In the Kona, Hyundai uses high-strength steel to reduce weight and increase passive safety. Hyundai is the only car manufacturer that makes its own steel to use in its vehicles on a global basis. The Kona will also have numerous active safety features, like lane-keep assist, automatic high-beams, forward-collision avoidance, blind-spot monitoring, and rear cross-traffic alert.

The exhaust and the all-wheel drive system have been fitted so that there is minimum intrusion into the interior. The suspension has been designed to allow for a low load floor and lower rear seats. This significantly enhances the interior space and the headroom. There is plenty of room for cargo as the rear seats can be folded flat and the cargo area has two height settings.

Customers who opt for the Kona can choose from a number of engine variants including a 2.0-liter inline four having an output of about 147 horsepower. This is paired with a six-speed automatic transmission and will give the model the power needed to go from 0-62 mph in about 10 seconds, which is about average for its class. The engine runs on the efficient Atkinson cycle, which should increase the fuel economy.

The upgraded powertrain is Hyundai’s turbocharged 1.6-liter inline-four and 7-speed dual-clutch combo. With an output of 175 horsepower and 195 lb-ft of torque, the two work in tandem to take the Kona from 0-62 mph in 7.7 seconds, which is really fast compared to other models in this category. Customers in Europe will be able to opt for a 1.0-liter turbo three-cylinder engine or a 1.6-liter diesel.

Hyundai has not yet finalized the final pricing, fuel economy ratings, dates for the retail launches in different markets. These details will be revealed in the next few months.