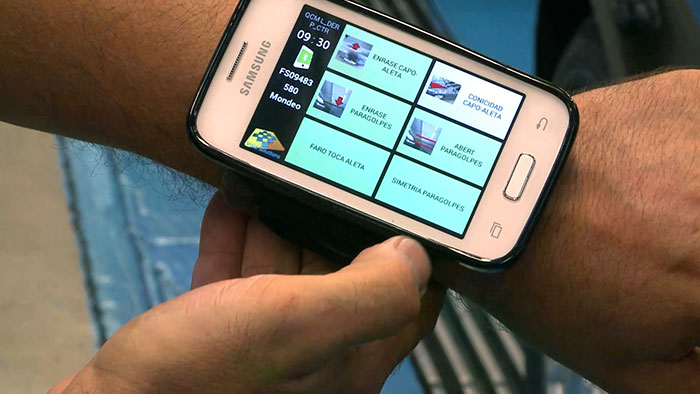 The company has come up with a wearable device which is connected to a smartphone app and makes it possible for production line workers to make faster and more accurate quality checks on vehicles coming off the production line.

Earlier, employees at the company’s factory in Valencia, Spain, depended on a paper -based system that made it necessary to walk back and forth for over a kilometre on a daily basis to access information on desktop PCs. The new wrist-worn Portable Quality Assurance Device which is connected to a Android app makes it possible for them to make specification and quality checks on the spot and stop the moving assembly line if needed. This is the first time such an app is used in the industry.

Speaking about the new innovation, Linda Cash, vice president, Manufacturing, Ford of Europe said that the company offers varied options and features across its vehicle range and the use of the digital innovation would help to make the manufacturing process leaner. All employees have to do is consult a smartphone screen in order the different aspects of a vehicle’s quality and specifications. This will improve work processes and manufacturing efficiency and help to guarantee the highest levels of product quality.

The Bluetooth-enabled device displays the exact quality inspection requirements for each vehicle that passes along the assembly line on its touchscreen making it possible to instantly follow up and approve. The use of these devices cuts down the time for each vehicle check by seven seconds while it has reduced human error by 7 percent. With the annual production output at the Valencia plant expected to exceed 400,000 units in 2016 the use of the devices will translate into significant savings in time and will allow for additional quality inspections.

At the Valencia plant, Ford builds six nameplates and even more body styles and these include hundreds of different vehicle specifications like Transit Connect light commercial vehicle, Kuga SUV, the Mondeo sedan, the Mondeo Vignale, Tourneo Connect people-mover, all-new S-MAX multi-activity vehicle, and Galaxy seven-seat people-mover. Ford had recently announced it is on track to complete a 2.3 billion Euro project to modernize the manufacturing operations in Valencia, thus transforming the facility into one of the most advanced, productive and flexible vehicle manufacturing facilities in the world.

Ford production manager Ramón García proposed the use of such a wearable device connected to a smartphone app to the management team of the Valencia plant after he noted the increasing usage of smartphones and tablet apps among his family members and colleagues. Ford collaborated with local software company Visia Solutions S.L in order to develop the Android-powered app.

“Smart mobile technology increasingly helps my colleagues and my family organize our personal lives. It struck me that we could apply similar technology to the workplace – and improve the automotive production process,” García said. “This technology helps us to better handle the increased complexity of more vehicles and more vehicle specifications being produced on a single assembly line.”

Garcia added that the initial feedback from production line workers has been highly positive. The company is exploring other areas where digital innovation could be employed to further increase efficiency and quality.

On the heels of a successful pilot project, Ford now plans on introducing the use of the Portable Quality Assurance Devices in other plants.

With more consumers taking to wearable devices like fitness trackers, smart watches, and glasses, Ford recently opened the Automotive Wearables Experience lab at its Research and Innovation Center in Dearborn. At this facility, engineers and scientists work on ways to integrate wearable devices and vehicles to help driver-assist technologies to have greater awareness of the driver behind the wheel, especially if concentration levels drop due to stress or drowsiness.

Valencia is also notable for being one of the Ford plants in Europe with an advanced wi-fi network for the flexible installation to vehicles on production lines of the software that is needed for SYNC 2, Ford’s voice activated connectivity system. Assembly workers use this to download vehicle-specific language and navigation packs for each vehicle based on the market it is meant for.