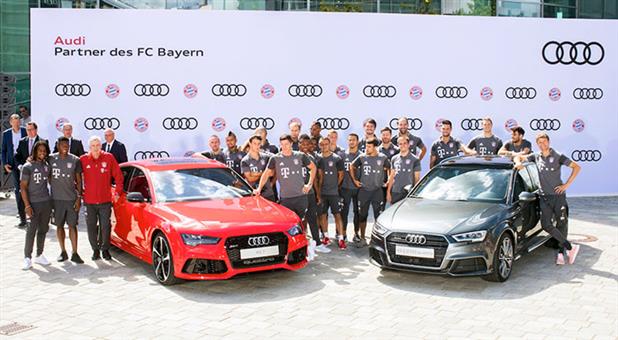 Renowned German football club, FC Bayern has begun the football season on a sporty note with Audi. Bayern has renowned players like Manuel Neuer, Jérôme Boateng and Franck Ribéry as part of its squad and is all set for the new Bundesliga season that begins tomorrow. Audi held an event in Ingolstadt to hand over Audi cars to the players. Audi fans from the region and the company’s employees got a chance to mingle with the Bayern stars and get their autographs at the event. The FC Bayern coach, Carlo Ancelotti was visiting Ingolstadt for the first time.

FC Bayern München and Audi have a longstanding partnership going back to the summer of 2002. The 2016-2017 season will be their 15th joint season. Some of the highlights of the partnership between Audi and FC Bayern include the Audi Cup that has been held every two years from 2009 at the Allianz Arena as a preparatory tournament and the Audi Summer Tour abroad. In fact, Audi supported Bayern’s recent training camp in the United States where the team played matches with AC Milan, Inter Milan and Real Madrid and held residential camps for aspiring football players who benefited from the expertise of the coaches and players belonging to FC Bayern.

When it comes to their choice in cars, the favourite cars of the stars revealed their fondness for all things sporty. 15 players including Thiago Alcántara, Holger Badstuber and Xabi Alonso opted for an Audi RS 6 (including Holger Badstuber, Xabi Alonso and). The sporty RS7 was another hot favourite with players like Mats Hummels, Franck Ribéry and Robert Lewandowski choosing the car. The new player on the team, Renato Sanches, chose the car that is just right for town traffic, the Audi A3 Sportback. Coach Carlo Ancelotti had already received an Audi S8 plus in July.