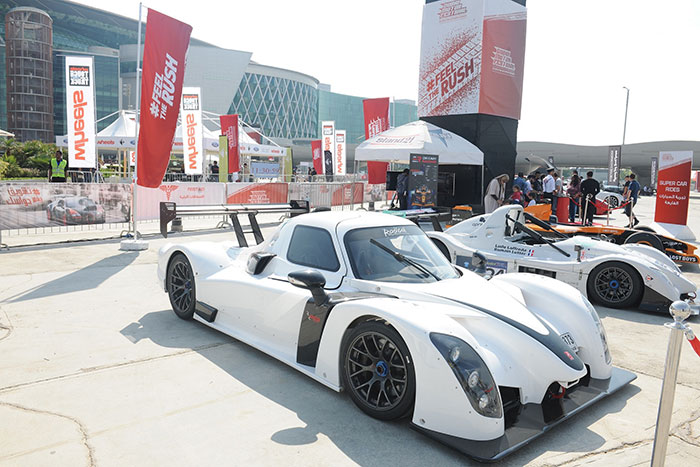 The Dubai Motor Festival came to a glorious close last weekend with the renowned Marque D’ Elegance that showcased a wide range of exciting vehicles at the Motor Village.

Meydan, the venue of Motor Village played host to motoring fans across the region and their families as they came to see the grand spectacle of unique cars drawn from different parts of the world during the Dubai Grand Parade. The parade was flagged off by H. E. Mohammed Bin Sulayem, one of the well known figures in the Arab motoring world. The Grand Parade included over 600 bikes, trucks, supercars and vintage cars. It made its way from the Motor Village in Meydan to some of the most iconic landmarks in the city and returned to Meydan again. The parade was organized in collaboration with the Dubai

Police and the RTA and was witnessed by thousands of spectators.

The most notable attraction was the contest for the Best Decorated National Day Car. Participants outdid each other to come up with the most colorful take on the colors of the Union. The first prize eventually went to a Jeep Wrangler that truly embodied the spirit of the UAE, complete with a Camel as the backseat passenger.

This was the first time that the region was holding a Marques d’Elegance contest in order to provide owners of beautiful cars across the region with a platform to showcase their custom, vintage and supercars. With the large number of entries, the judges found it really difficult to pick the winners. From a wide range of supercars that included Ferraris, Lamborghinis and Ferraris, it was Abdul Hameed and his 2015 McLaren MP4 650s who won the title for the best supercar.

The majority of entries in the classic car category included vintage American models from the 1940s right up to the 1980s, with Chevrolets, Cadillacs, Camaros and Fords on display. These vintage beauties proved to be a crowdpuller and eventually it was a pony car, Darren McCarthy’s 1965 Ford Mustang that emerged as the overall winner.

The custom cars category gave owners plenty of free rein to push the limits of their technical and creative expertise. Tricked-out models ranged from pick-up trucks to eight-wheelers. Hussain Ahmed Abdulah and his 2010 Chevrolet Camaro grabbed the top spot in this category.

The Motor Village proved to be a venue that provided families with plenty of scope for entertainment with the contests, falconry, the Grand Parade and specially designed motoring games. On Friday, the world famous rally stunt driver, Ken Block displayed his extraordinary driving skills for the first time in the Middle East in his Gymkhana Grid Show.

The winners of the contests received their prizes at an awards ceremony that brought the Dubai Motor Festival 2015 to a close and was attended by dignitaries like H. E. Mohammed Bin Sulayem, H. E. Laila Mohammed Suhail, CEO of Dubai Festivals and Retail Establishment (DFRE), an agency of the Department of Tourism and Commerce Marketing (DTCM) that was tased with organizing the DMF 2015, H. E. Issam Kazim, CEO of Dubai Corporation for Tourism and Commerce Marketing (DCTCM), and Saeed Mohammed Mesam Al Falasi, Director, Strategic Alliances pision, DFRE.