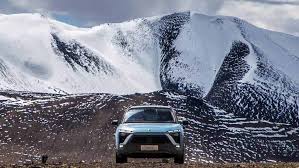 Electric vehicles reached a new height when an electric car from a Chinese brand reached the highest altitude that an electric car has ever reached. The vehicle managed to attain a height of 18,751 feet to set a Guinness world record.

It was a Nio ES8, an all-electric SUV from Chinese car manufacturer, Nio that achieved this feat. The car scaled the Purog Kangri glacier in Tibet. This glacier is considered to be the third largest glacier in the world, and stands at a height of 5,715.28 m.

The goal of performing this extraordinary feat was to highlight the reliability of the electric vehicle and the ability of the car’s battery to tolerate extremely low temperatures. The vehicle used as part of the record-making drive was driven by driver Chen Haiyi.

The record is particularly relevant in view of the fact that many parts of the United States recently experienced sub-zero temperatures due to polar vortex. Many of the electric vehicles used in this region lost their full battery capacity, causing them to have reduced range.

In sharp contrast, the Nio ES8’s record climb was made in a temperature of 23 degree Fahrenheit, as certified by the Guinness Book of Records team. Nio made the record attempt on September 24, 2018.

As part of the record making attempt, the company also explored the feasibility of setting up charging stations on the way up the glacier, as this would have made trips to Tibet a possibility for electric car owners.