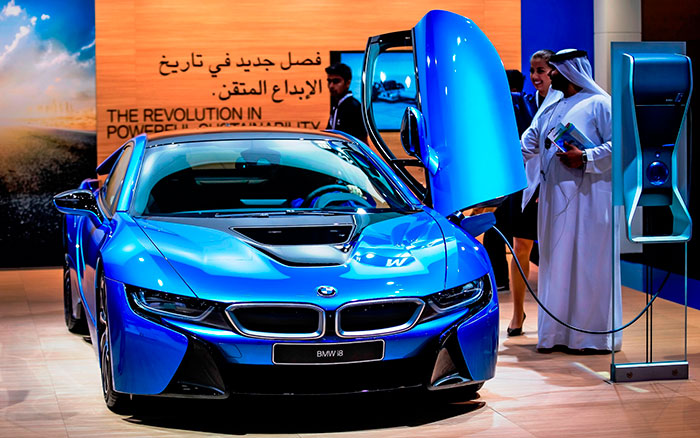 The 2015 Dubai International Motor Show served as a platform for the BMW Group Middle East to launch a number of innovative technologies and pioneering design through the introduction of new models in association with its local importer, AGMC.

Visitors to the show were highly impressed by the all-new sixth generation BMW 7 Series which was the star of the company’s impressive line-up of 21 models. The most notable features of the new car were its outstanding design, the Sky Lounge for a panoramic view, the Executive Lounge for rear seat passengers, the new intuitive Touch Command 7-inch tablet which provides users access to many comfort and entertainment functions at their fingertips, the unique Gesture Control function and a Welcome Light Carpet that illuminates the area in front of the car doors when they opened or shut.

A limited edition BMW 7 Series Solitaire which incorporated unique design elements, like diamond accents, piano black trim and a sparkling exterior finish with glass flakes made its appearance at the show. The Solitaire is the most expensive 7 Series ever produced and the buyers would belong to a highly exclusive club as only six models are to be sold in the Middle East, as part of the BMW Inpidual program.

The BMW i8 reaffirmed the BMW Group’s commitment to a more sustainable future. With its blend of a revolutionary concept, stylistic appeal, and an aerodynamically optimised body design, the model proved that sustainability need not come at the cost of driving pleasure or performance.

The BMW stand also featured the complete X model range, with the spotlight being mainly on the all-new BMW X1. It is for the first time that the second generation X1 model comes with a front-wheel drive. It also offers plenty of additional internal space for both passengers and luggage, along with enhanced sporting ability. The other models in the X model range included the X3, X4, X5 and X6 as well as the sport editions – X6M and X5M.

The BMW M4 Coupé as well as the BMW M4 Convertible represented the brand’s M high-performance sports range. The M-specific design of the two high-performance sports cars highlighted their performance aspect in addition to meeting and exceeding the norms with regard to functional aspects like aerodynamics, cooling and weight saving. The BMW M4 Coupé meanwhile can be said to be the ultimate driving machine and sets the benchmark for sporty driving dynamics in its class. Other models that appeared on the BMW stand included the BMW 435i Gran Coupé, BMW 535i Sedan and BMW 650i Gran Coupé, all of which made BMW a highly popular booth at the Motor Show.

MINI used the show to present its new visual identity with the sleek design and and understated style of its models being reflected even in the minimalistic design of the stand. The booth showcased the all-new flagship model MINI Clubman, MINI Countryman, MINI 5-Door Hatch and MINI John Cooper Works Hatch.

The all-new MINI Clubman made its official Middle East debut at the show ahead of its arrival in the retail market in 2016. Brimming with sophisticated design elements, its stretched silhouette and accentuated width revealed its new, bold dimensions. The most versatile, charmingly sophisticated MINI ever made, the Clubman is a five seater with plenty of cargo space and six doors thanks to its typical split rear doors, is a six-door model. It is ideal for the tight parking spaces that are normally seen in Dubai.

The MINI Clubman is an everyday car but with the availability of over 10 million unique combinations from the MINI Yours program that can be used to customize a car according to the tastes of its owner, no one Clubman will be like another. Other innovative features include the novel projection of the MINI logo from the exterior mirror on the driver’s side when opening and closing the car. There is also the alarm system including LED status lights integrated in the fin antenna

Meanwhile, new to the MINI brand is an 8-speed Steptronic transmission, available as an option on the MINI Cooper S Clubman and the MINI Cooper D Clubman. Exceptional handling comes courtesy of a suspension set-up which is unique to the new MINI Clubman

The importance of the Middle East automotive market and the Dubai International Motor Show was emphasized by the stature of the key officials who flew over from BMW Group’s head office in Munich for the show. They included Karim Habib, BMW’s Chief Designer and Daniel Schmidt, MINI Product Manager. The Middle East is the third biggest market for the BMW 7 Series and the show served as an excellent venue to showcase BMW and MINI’s personalization programs – BMW Inpidual and MINI Yours – both of which are highly popular in the region due to the increasing demand for personalization here. When it comes to the MINI brand, the show marked MINI’s entry into the premium company SAV segment, which is expected to grow at a fast rate in the region.