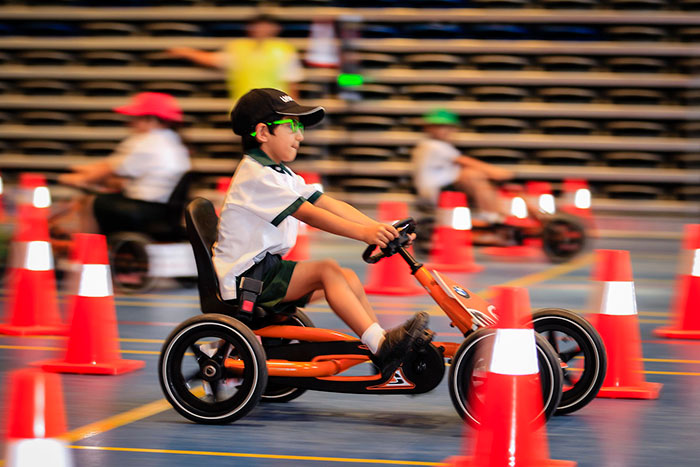 BMW Group Middle East is holding a road safety awareness program called ‘My First License – I Know My Road Rules’ from 15 to 26 November in association with Ciel Events. As an outcome of the program, more than 5000 children studying in six schools in Dubai and five schools in Abu Dhabi will be coached in a fun and interactive manner about basic road rules and signs, as well as safe driving behavior.

This program is a worthy successor to BMW Group Middle East’s award-winning road safety campaign ‘Stay Alert. Stay Alive.’, which encouraged people to increase their safety on the road by buckling up every time. This campaign focuses on educating future drivers and thus contributing to awareness about the importance of road safety.

The target group of the initiative aged between four and nine, were first briefed by an instructor who took them through a well-designed road safety rules booklet. Then, the junior drivers were encouraged to use miniature cars to navigate a network of road signs, zebra crossings, a roundabout and traffic signals in order to help them understand what they had learned. Students who successfully completed the challenge were overjoyed to get their first personalized plastic license card, complete with their age and photograph, which was endorsed by the Dubai Police, Abu Dhabi Police and the Knowledge and Human Development Authority (KHDA).

Commenting on the campaign, Col. Jamal Salem Al Ameri, Head of Public Relations, Traffic and Patrol Directorate, Abu Dhabi Police said: ”We welcome the move by the organizers to introduce the ’My First License – I Know My Road Rules‘ in Abu Dhabi schools. It is a great effort and is a pressing need of the day to make sure that our children are given the right guidance at an early age. We are happy to be a part of this campaign and are sure that it will have a good impact in their future behavior.“

The students who participated in the campaign gave feedback reflecting the success of the campaign. Sabrina, who is in Year 4 said she learned about the different traffic signs and the importance of following rules. She said, “When you’re on the road you should never talk on the phone. You should ask your dad to turn off his mobile phone and always drive safely.”

Since the’My First License™ – I Know My Road Rules™‘ program was first launched by Ciel Marketing and Events in schools across Dubai in 2011, over 20,000 students from 37 schools participated in this interactive learning program that boosts awareness about the importance of road safety in school children.

Back In 2010, the BMW Group Middle East had launched the ‘Stay Alert. Stay Alive.’ in order to emphasize the importance of using appropriate child car seats and of buckling up. Over the past five years the campaign has taken place in all countries across the Middle East including UAE, Kuwait, Qatar, Bahrain, Saudi Arabia, Oman and Jordan. The campaign involved interaction with customers, students and the general public in order to understand their attitudes and boost awareness about road safety, public awareness events, distribution and demonstration of booster cushions as well as the development of an interactive e-learning course.