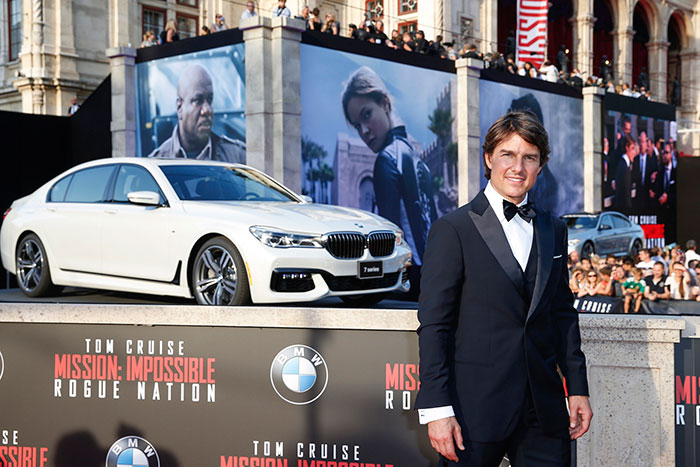 Cars underpin the action in movies like Speed and those belonging to the James Bond franchise. Cars features in blockbuster movies from Hollywood like Spectre, the latest James Bond movie will prove to be the stars of the show at the 13th Dubai International Motor Show (DIMS).

These vehicles will definitely add to the glamour quotient and give fans a once in a lifetime chance to see vehicles like the Toyota 1968 2000 GT and the 1985 Aston Martin V8 Volante from the Bond movies. The Motoring Nostalgia Museum, a new attraction at the Show will help fans take a walk down memory lane by featuring these and other models that have been driven by Hollywood celebrities in the past 40 years.

Other cars that are likely to make an impression on visitors include the Lykan from W Motors which was featured in Furious 7 and the Volvo P1800 which Roger Moore drove in the hit 60’s TV series ‘The Saint’ in his role as Simon Templar. Apparently, Moore like the car so much that he bought one for his own personal use.

Commenting on the cars Trixie LohMirmand, Senior Vice President, Exhibitions & Events Management, Dubai World Trade Centre said, “Many of these cars are as memorable as the films themselves.”

She added that it would be very exciting for visitors to the show to have a chance to see and touch these “superstars”that they had previously seen only on the silver screen. Vintage cars as well as Hollywood cars would further enhance the appeal of the motor show to visitors of all ages.

The Audi booth will be highlighting Tony Stark’s vehicle of choice of the 2016 Audi R8 in Marvel’s Avengers: Age of Ultron movie, further strengthening Audi’s eight-year partnership with Marvel. The new TTS, A3 Cabriolet and the 5.2-litre V10-powered R8 supercar are other cars that will be making an appearance in the movie.

The latest James Bond movie, Spectre, served as the right partner for Jaguar’s stylish C-X75, which in the movie is driven through the moonlit streets of Rome in a high-octane chase scene by the villain’s henchman Hinx, a role enacted by Dave Bautista. The Jaguar C-X75 supercar was named as the most advanced Jaguar ever created.

Bruce Robertson, Managing Director for Jaguar Land Rover MENA, said: “Our Special Vehicle Operations team is responsible for three stars in the new James Bond film, Spectre. The Range Rover Sport SVR, special Land Rover Defender and the Jaguar C-X75 supercar concept have been created for some of the toughest James Bond villains and this show is the perfect platform to celebrate these iconic production and concept vehicles with our customers in MENA.”

The highly successful Mission Impossible returned to cinemas in August with Rogue Nation and again its lead character Ethan Hunt, played by Tom Cruise, returned with the new BMW M3 as his car of choice.

After a successful partnership with Mission: Impossible – Ghost Protocol in 2011, BMW came back to Hollywood with not just the M3 but also the new BMW 7 Series luxury saloon and X5, as well as motorcycles and technological input for the production crew of the latest Rogue Nation movie.

Leanne Blanckenberg, Corporate Communications Manager, BMW Group Middle East, said that the partnership helped to highlight the dynamic performance, technological leadership and the unique BMW ConnectedDrive features of the BMW models throughout the movie. BMW models proved to be the perfect foil for Ethan Hunt and his IMF team.

With Hollywood, luxury cars and a touch of nostalgia, the Dubai International Motor Show is set to soar to greater heights this year.