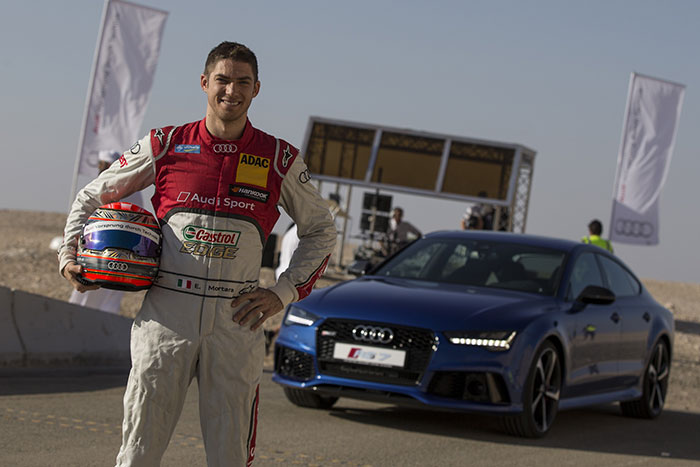 As part of the Audi Challenges Arabia promotion, fans across the Middle East were the region were asked to come up with challenges that they would like to see Audi models tackle. More than 4,000 fans submitted ideas that they would like to see in action. Of these, the first one that was tackled was an Audi R8 adrenaline challenge that became a reality at the Dubai Autodrome.

The second feat that was performed as part of the Audi Challenges Arabia contest was one that was truly without equal. The fastest sprinter in the UAE, Musa Khalfan Yasin faced off against one of Audi’s best racing drivers, Edoardo Mortara. Musa raced to the top of the highest building in the world, the 828 meter tall Burj Khalifa in its elevator, which is billed as one of the fastest elevators in the world. Meanwhile Edoardo Mortara used an Audi RS 7 with an output of 560 hp to scale the heights of Jebel Hafeet, which is one of the highest peaks in the UAE at 1,249 meters.

The race was definitely an exciting one and Audi Middle East showcased the thrill of the match on its YouTube channel.

Neil De Almeida who had sent in the suggestion for the challengefound it difficult to believe that since idea was transformed into reality. When he sent in his take on a crazy stunt for Audi, he thought it would be cool to see an Audi race against the elevator in the Burj Khalifa. However, he never expected to receive a call from Audi Middle East saying that his idea was going to be put into production.

Audi Middle East had set up a bespoke microsite www.audichallengesarabia.com for the Audi Challenges Arabia campaign and every challenge that is accepted will showcase Audi’s technical perfection and drive for perfection.