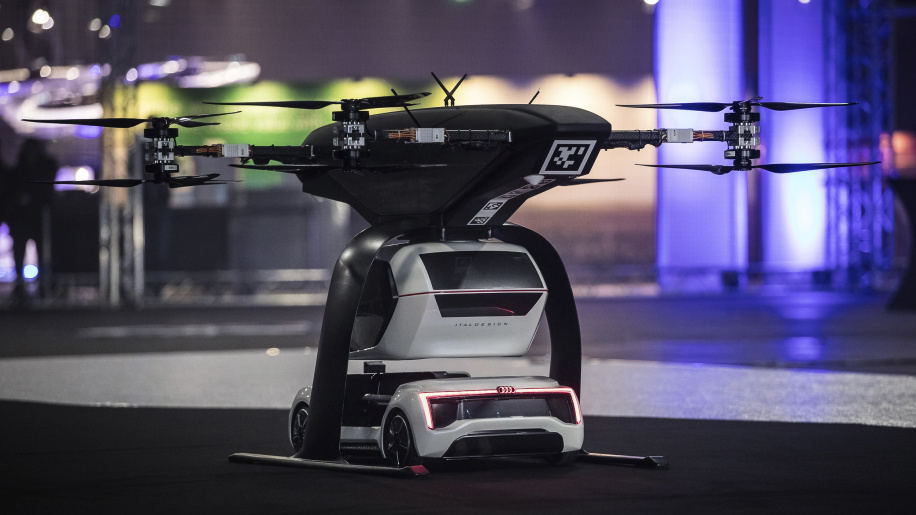 Audi used the Amsterdam Drone Week to showcase its efforts to develop a flying taxi. In collaboration with the aerospace company, Airbus and its subsidiary Italdesign, Audi displayed a working prototype of the Pop.Up.Next flying taxi. The model was a 1:4 scale model that had many refinements when compared to the first version of the concept vehicle that was launched at the 2017 edition of the Geneva Motor Show.

Audi projects that the flying taxi could play a key role in multi-modal urban transport within a period of about ten years. Commenting on the Pop.Up.Next air taxi Dr. Bernd Martens, president of Italdesign and Audi board member for sourcing and IT said Audi is convinced that flying taxis will be very much a part of urban transport in the future.

The Pop.Up.Next comprises an autonomous, wheeled, battery-electric chassis which is attached to a detachable, two-seat pod that Audi designed in collaboration with Italdesign. When flight is needed, a flight module that Airbus designed will land, straddling the pod. The chassis is used to raise the pod until the pod locks onto the flight module, with the flight module then taking off for the destination. When it arrives at the destination, the four-propeller module straddles another chassis upon landing, lowers the pod onto the chassis, and the chassis departs on the road.

The operation of the flying taxi was practically demonstrated in Amsterdam. After a drone flew to a parking spot on the floor of the hall, the autonomous vehicle then drove under the flight module and exchanged the pod. The drone then flew across the hall to another chassis, where it deposited the pod, and the chassis then drove itself away. Passengers learn of every move through a 49-inch touchscreen. Occupants of the pod can put in directions though touch, speech, facial recognition, and eye-tracking in order to steer the pod.