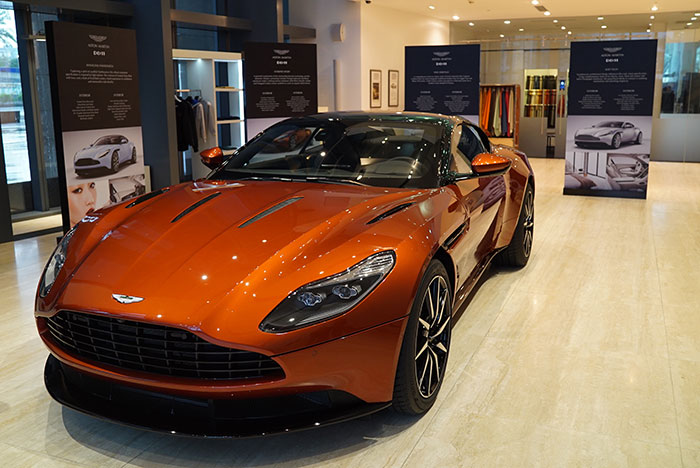 Aston Martin’s Middle East Regional Director, Neil Slade today officially unveiled the DB11 to a select group of local and regional media at the Aston Martin Dubai showroom. The car made its official global debut at the ongoing Geneva International Motor Show. The DB11 is the first car to be launched by the British brand as part of its “Second Century” plan and is the most significant launch since the debut of the DB9 back in 2003.

The DB11 is characterized by a distinctively fresh design language, impressive aerodynamics and comes with a new 5.2-liter twin-turbocharged V12 engine that has been built in-house.

The DB11 is the most powerful, efficient and dynamic model ever in the company’s history thanks to its new engine and a lighter, more robust and space efficient bonded aluminium frame.

The most notable exterior features of the DB11 are it’s a prominent front spoiler, long bonnet to make room for the 12-cylinder engine, elegant LED tail-lights, highly defined wheel arches and floating roof effect that is created by a continuous ridge between the rear pillar and the wing.

The aerodynamics has been significantly enhanced by several innovative features including concealed vents in the side strakes to reduce front-end lift and an “AeroBlade” spoiler to reduce lift at the tail.

The naturally aspirated 12-cylinder engine has been replaced with the twin-turbocharged 5.2 liter V12 to meet more stringent emission norms. It has been paired with an eight-speed ZF automatic gearbox and produces an output of 600 bhp and can take the car from 0-62 mph in just 3.9 seconds. The model has a top speed of 200 mph. Other features of the engine include stop-start technology and cylinder deactivation.

The interiors too are strikingly modern, due to the Aston Martin’s partnership with Daimler. The 12 inch digital driver’s display, dual-zone climate settings, 360-degree parking camera and centrally mounted 8 inch screen all enhance the driving experience

Commenting on the Db11, Neil Slade said, “This is the most important car Aston Martin has launched in history. The DB11 rightfully places Aston Martin as a true leading luxury brand in the automotive market.”