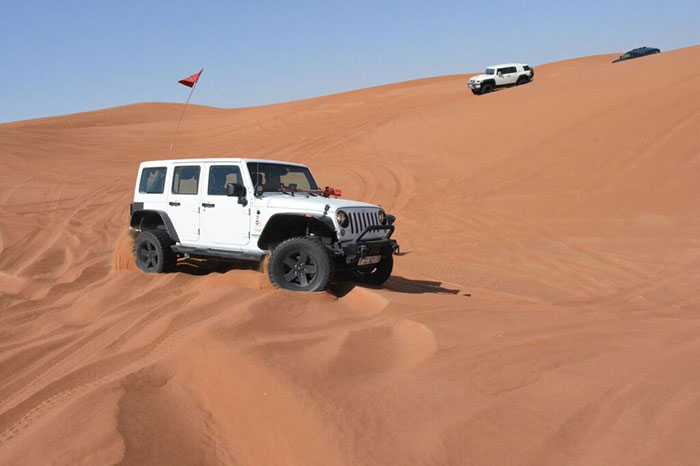 Arctic Trucks ME, which specializes in modifying 4WD vehicles to negotiate really tough environments like desert dunes and icy glaciers has announced that it has recently launched an off-roading club for off-road enthusiasts in the UAE.

The company, which was established in 1990 in Iceland and operates in the UAE in close collaboration with Al Futtaim Motors, has immense experience in modifying SUVs for all kinds of environments. Arctic Trucks was recently in the news for participating in an expedition to the Magnetic North Pole in BBC Television‘s Top Gear show, along with Toyota GB and Polar Challenge. In 2010, Arctic Trucks had also set a Guinness World record for the fastest overland journey to the South Pole, crossing 2308km of the Antarctica High Plateau from Novo to the South Pole in 4.5 days.

The off-roading club will involve monthly expeditions during the winter season, in which off-roading enthusiasts here will embark on desert adventures to conquer sandy dunes in different parts of the UAE. The club will serve as a platform for offroading enthusiasts across the country to connect and enjoy offroading experiences with likeminded people while pooling their knowledge and experience. There will be no membership fees or monthly charges and the club will be open to all with a weakness for the outdoors irrespective of their offroading experience levels.

Each monthly offroad expedition will begin with a get together at a meeting place in Dubai at 8 a.m. before all the members make their way in their 4 x 4 vehicles to a starting point in the desert. Each group will be assigned an Arctic Trucks’ marshal who will guide and advise them through each step. There will be breaks for Pit stops, tire shops and refreshment along the way.

Commenting on the new club, Hjalti Hjaltison, General Manager Arctic Trucks ME said that the club will provide members with a perfect opportunity to enjoy desert adventures while honing their offroading skills and learning new tricks in a perfectly safe and controlled environment. All the trips will be planned and controlled by highly experienced and trained professionals and safety whose primary priority will be safety of the club members.

Arctic Trucks is planning an expedition to Iceland in March 2016. This will be another expedition which will provide the company with the chance to demonstrate that it is possible to take an adventurous trip with its fair share of thrills and excitement while making sure that safety is at the highest possible level with the use of the right vehicles.